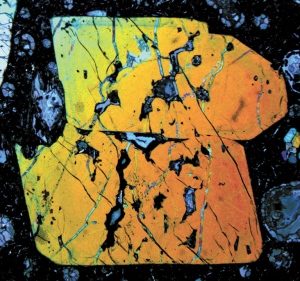 Earth recycles — but it takes its time. Chemical remnants of the rigid surface plates that plunge deep into the planet’s interior at subduction zones can eventually resurface on distant volcanic islands. But the process may take more than two billion years, a study published in this issue1 suggests.

By analysing volcanic rock that erupted millions of years ago on an island in the South Pacific, the researchers found clues about when components of the rock first left Earth’s surface and began their long journey through its interior. The authors’ findings are “a smoking gun” for deep, slow tectonic recycling, says Steven Shirey, a geochemist at the Carnegie Institution for Science in Washington DC. “It’s hard to conclude that they’re not right.”

Studies of volcanic rock have revealed that the chemical and isotopic composition of Earth’s mantle — the layer of molten rock beneath the crust — varies considerably from place to place, says Rita Cabral, a geochemist at Boston University in Massachusetts and a co-author of the paper. Some have proposed that those variations arose because chunks of crust that once resided at Earth’s surface have tainted parts of the mantle2, 3. But researchers have had to rely on computer models to estimate how fast the recycling takes place — and firm evidence that material is recycled through the planet’s deep interior has been lacking.

Cabral and her colleagues now have compelling evidence that such tectonic recycling really happens, and of how long it takes1. The team analysed rock samples from Mangaia, the southernmost of Polynesia’s Cook Islands. The rocks, formed by volcanic activity about 20 million years ago, have been worn by weathering. But sulphide minerals locked away inside weather-resistant crystals of olivine, which formed at a depth of a few kilometres before spewing from the volcano, still retain their pre-eruption composition, says Cabral.

That composition is telling. For one thing, Cabral notes, the proportion of the isotope sulphur-33 is substantially lower than that typically found in Earth’s crust. Although biological processes can generate such an anomaly, they would simultaneously generate abnormally high concentrations of sulphur-34 — which are not present in the Mangaia samples.

The most likely source of the sulphur-33- depleted rocks, the team says, is mantle material that includes remnants of crust that sank or were pushed below Earth’s surface at least 2.45 billion years ago, before photosynthetic organisms filled the atmosphere with oxygen. When oxygen was low, sunlight-driven reactions would naturally have created sulphides containing lower-than-normal proportions of sulphur-33; later, the ozone layer resulting from the surge of oxygen would have stifled those reactions.

At some point, Cabral contends, material from the core–mantle boundary upwelled in a ‘hotspot’ — a large-scale version of the buoyancy-driven burbling seen in the lava lamps that were popular during the 1970s (see ‘Return from the core’). The upwelling swept the sulphur-33-depleted material back to the surface. 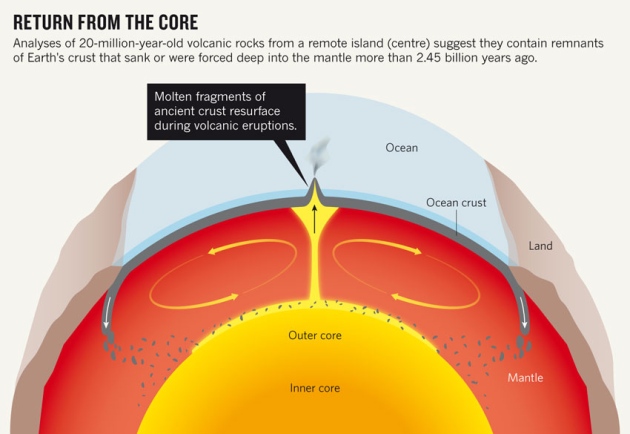 In addition to providing insight into the pace of tectonic recycling, the findings reveal how little violent mixing occurs deep within Earth, says Cabral. The purported piece of ancient crust containing the sulphur-33- depleted minerals “had to have stayed relatively intact in the mantle for all that time”, she notes, implying that the deep mantle may be a graveyard of ancient tectonic slabs.

Shirey sees a broader implication: that modern-style plate tectonics were in motion at least 2.45 billion years ago. That’s a conclusion that some researchers resist, arguing that the young planet still had too much internal heat for surface plates to have been subducted into the mantle, as they are today.

“This is exciting, and there’s no doubt there’s recycling of ancient material,” says Robert Stern, a geoscientist at the University of Texas at Dallas. But he suggests that sulphur-33- depleted material might have formed not at the surface but on the underside of a section of continental crust and then “dripped” down into the mantle, a process that some seismic studies suggest may be happening in certain regions today.