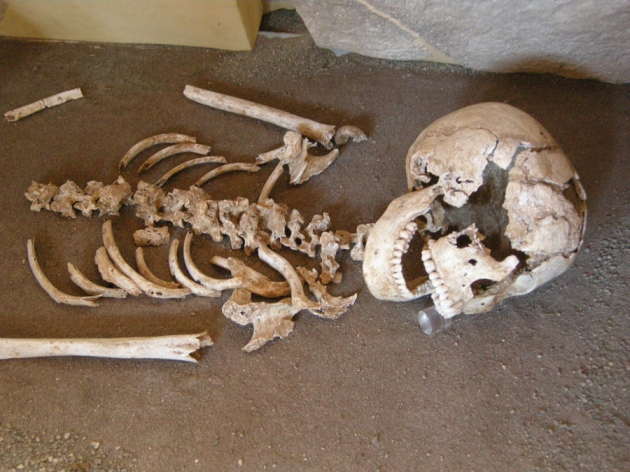 The skeleton of a woman who lived in Tuscany 2,000 years ago shows signs of malnutrition and perhaps of an attempt to avoid certain foods.

If going gluten-free seems hard now, try doing it in ancient Rome. A well-heeled young woman with coeliac disease tried to adapt her diet in an unsuccessful effort to cope with gluten sensitivity, studies of her remains suggest.

The woman’s remains were buried in a 2,000-year-old tomb at the Cosa archaeological site on the Tuscan coast in Italy. The ancient Roman city's economy depended on growing wheat and olives and was not particularly prosperous, yet archaeologists discovered gold and bronze jewellery entombed alongside the woman’s bones. They concluded that she was relatively wealthy and would have had access to plenty of food.

Yet the skeleton of the woman — who researchers estimate was 18–20 years old — bore signs of malnutrition and osteoporosis. Both can be complications of untreated coeliac disease, which is characterized by a severe allergic reaction to gluten in the intestinal lining. Many of the woman's bones were eroded at the tips, and she would have stood just 140 centimetres (4 feet, 7 inches) tall.

DNA analysis had previously shown that the woman carried two copies of an immune system gene variant that is associated with coeliac disease2. Although coeliac is a complex disease in which multiple environmental factors may play a role, the gene variant is found in nearly all patients in contemporary populations.

The combination of those genetic risk factors and malnutrition in someone likely to have good access to food make coeliac disease a reasonable diagnosis, says Gabriele Scorrano, a biological anthropologist at the University of Rome Tor Vergata, who led the latest study, published this month in American Journal of Physical Anthropology1.

To determine if the woman altered her diet, he and his colleagues analysed carbon and nitrogen isotopes in her bones, which tend to relate to food intake. The chemicals cannot reconstruct a person’s diet perfectly but instead paint broad brushstrokes of the consumption of foods such as plants, meats, freshwater fish and seafood. They can also indicate whether an individual consumed foods that were different from others.

Scorrano and his team found that the young woman would have consumed more meat and possibly freshwater fish and fewer plants than did people living in the area in the sixth century and medieval times. Carbon and nitrogen levels in her bones were also distinct from those in most other inhabitants from the Imperial Roman period previously sampled, but similar to those in bones from an early Christian burial site in Rome, where individuals may have favoured freshwater fish.

Scorrano notes that malabsorption of nutrients could offer an alternative explanation for the unusual isotope levels in her bones.

Leonard Rutgers, an archaeologist at Utrecht University in the Netherlands, says that the researchers make a good case that the woman changed her diet to cope with coeliac disease. But he says it is unclear why she would have eaten freshwater fish, given Cosa's proximity to the Mediterranean Sea. Perhaps she moved to Cosa shortly before her death, he says.

The Greek physician Aretaeus of Cappadocia recorded symptoms in line with coeliac disease around the first century ad, but a definitive link between the condition and gluten was not made until the 1950s. Scorrano says that the young woman probably did not entirely avoid gluten. “If she had excluded cereals from her diet she wouldn’t have experienced these problems,” he says. "Probably she didn't understand she had this disease."