Condoleezza Rice, former US Secretary of State and national security adviser, ought to be a tough woman to surprise. Yet when Henry Louis Gates Jr, host of a US television series called Finding Your Roots, revealed that nearly half of her genetic ancestry could be traced to Europe, Rice, an African American, told Gates, “I’m stunned.”

Although it is no secret that many African Americans have some European ancestry — a legacy of the transatlantic slave trade — advances in DNA analysis are beginning to provide more detailed insight for individuals. Commercial ancestry testing, once the province of limited information of dubious accuracy, is taking advantage of whole-genome scans, sophisticated analyses and ever-deeper databases of human genetic diversity to help people to answer a simple question: where am I from?

Until a few years ago, most ancestry tests for individuals relied on short stretches of DNA in cell-powering organelles called mitochondria, which are inherited through the mother, or on the Y chromosome, which a father passes down to his sons. As humans fanned out from Africa some 40,000 to 80,000 years ago and populated the world, mitochondria and Y chromosomes developed specific changes that were tied to different populations. Yet these ‘uniparental markers’, which chart an unbroken chain back through either the maternal or paternal line, are rarely unique to a population.

For example, a set of Y-chromosome markers called Haplogroup R1b is common among Western European men, but a small fraction of North Africans have it, too. Similarly, “if men have a Y chromosome that is more common in Scandinavia than England, they’re convinced they’re a Viking”, says Mark Jobling, a geneticist at the University of Leicester, UK. But that is not necessarily the case. Such nuances are not always conveyed by the companies that offer such services, notes Jobling. What’s more, Y-chromosome or mitochondrial markers trace only one strand in a person’s ancestry.

A more complete picture lurks in the full genome. It is trickier to tease out ancestry information from our 22 pairs of non-sex chromosomes, because whole stretches of DNA in these are mixed up in every generation. But in recent years, researchers have made strides mapping the ancestry of certain populations — including Europeans (J. Novembre et al. Nature 456, 98–101; 2008) and Indians (D. Reich et al. Nature 461, 489–494; 2009) — by simultaneously analysing hundreds of thousands of single DNA letter changes across the genome. These surveys of human genetic diversity, including the International HapMap Project and the 1000 Genomes Project, have provided the data needed for more sophisticated ancestry testing. 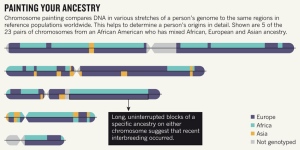 Genetics company 23andMe, based in Mountain View, California, was one of the first to offer its customers ancestry analysis based on whole-genome scans, at a cost of US$300–400. The company worked closely with the television network PBS on the latest series of Finding Your Roots, which uses whole-genome analysis to investigate the genealogy and deeper ancestry of figures such as Rice, actor Kevin Bacon and celebrity entrepreneur Martha Stewart.

The discovery that a significant amount of Rice’s genetic ancestry can be traced to Europe came from an analysis called chromosome painting (see ‘Painting your ancestry’), in which genetic variations in small chunks of each chromosome are compared with matching regions in different populations around the world (European, West African and East Asian in the case of 23andMe, although the company is soon due to extend the analysis to 20 populations, including Native American and South Asian).

Carlos Bustamante, a population geneticist at Stanford University in California, advises 23andMe and Ancestry.com, which runs a testing service called AncestryDNA from its base in Provo, Utah. He says that he works with scientists at the companies to make sure that the information they offer customers stands up to scrutiny. For instance, Ancestry.com’s predictions — which include possible connections to customers who might be distant relatives, on the basis of shared stretches of chromosomes — come with confidence estimates. “The important thing is to say ‘here are the limits of what we know’,” says Bustamante.

“If men have a Y chromosome that is more common in Scandinavia, they’re convinced they’re a Viking.”

As ancestry testing trawls deeper into the genome, such cautionary notes will become more important. It may be possible, for instance, to determine more precisely when someone’s ancestors from different populations interbred, says Sarah Tishkoff, a geneticist at the University of Pennsylvania in Philadelphia. But such calculations make assumptions about past population sizes and other demographic factors. Conveying such caveats to personal-genomics customers could prove difficult.

Individuals may soon be able to trace the geographic origins of their ancestors more precisely. An academic project called People of the British Isles has distinguished the genetic signatures of people from neighbouring UK counties. This level of precision was attained by analysing the genomes of people from rural regions, whose ancestors tended to live in the same place, says project leader Walter Bodmer, a geneticist at the University of Oxford, UK. Genome information from these individuals could form a database that others could use to track their distant ancestors.

Tishkoff says that deeper surveys of human genetic diversity are needed elsewhere, particularly in Africa. Angola, for example, where many slaves originated, is not represented in existing surveys, making it impossible for African Americans to trace ancestors who once lived there. “You can’t tell someone they can trace ancestry to a certain region if that region has never been studied,” she says.