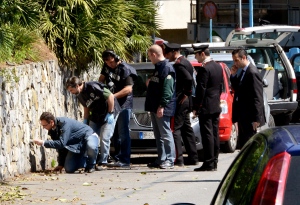 Investigations of the shooting of nuclear-engineering head Roberto Adinolfi have confirmed the involvement of an eco-anarchist group.

A loose coalition of eco-anarchist groups is increasingly launching violent attacks on scientists.

A group calling itself the Olga Cell of the Informal Anarchist Federation International Revolutionary Front has claimed responsibility for the non-fatal shooting of a nuclear-engineering executive on 7 May in Genoa, Italy. The same group sent a letter bomb to a Swiss pro-nuclear lobby group in 2011; attempted to bomb IBM’s nanotechnology laboratory in Switzerland in 2010; and has ties with a group responsible for at least four bomb attacks on nanotechnology facilities in Mexico. Security authorities say that such eco-anarchist groups are forging stronger links.

On 11 May, the cell sent a four-page letter to the Italian newspaper Corriere della Sera claiming responsibility for the shooting of Roberto Adinolfi, the chief executive of Ansaldo Nucleare, the nuclear-engineering subsidiary of aerospace and defence giant Finmeccanica. Believed by authorities to be genuine, the letter is riddled with anti-science rhetoric. The group targeted Adinolfi because he is a “sorcerer of the atom”, it wrote. “Adinolfi knows well that it is only a matter of time before a European Fukushima kills on our continent.”

“Science in centuries past promised us a golden age, but it is pushing us towards self-destruction and total slavery,” the letter continues. “With this action of ours, we return to you a tiny part of the suffering that you, man of science, are pouring into this world.” The group also threatened to carry out further attacks.

The Italian Ministry of the Interior has subsequently beefed up security at thousands of potential political, industrial and scientific targets. The measures include assigning bodyguards to 550 individuals.

The Olga Cell, named after an imprisoned Greek anarchist, is part of the Informal Anarchist Federation, which, in April 2011, claimed responsibility for sending a parcel bomb that exploded at the offices of the Swiss nuclear lobby group, Swissnuclear, in Olten. A letter found in the remains of the bomb demanded the release of three individuals who had been detained for plotting an attack on IBM’s flagship nanotechnology facility in Zurich earlier that year. In a situation report published this month, the Swiss Federal Intelligence Service explicitly linked the federation to the IBM attack.

The Informal Anarchist Federation argues that technology, and indeed civilization, is responsible for the world’s ills, and that scientists are the handmaidens of capitalism. “Finmeccanica means bio- and nanotechnology. Finmeccanica means death and suffering, new frontiers of Italian capitalism,” the letter reads.

The cell says that it is uniting with eco-anarchist groups in other countries, including Mexico, Chile, Greece and the United Kingdom. Mexico has already seen similar attacks: in August 2011, a group called Individuals Tending Towards Savagery sent a parcel bomb that wounded two nanotechnology researchers at the Monterrey Institute of Technology. One received burns to his legs and a perforated eardrum and the other had his lung pierced by shrapnel (G. Herrera Corral Nature 476,373; 2011). The package contained enough explosive to collapse part of the building, according to police, but failed to detonate properly.

Earlier that year, the same group sent two bombs to the nanotechnology facility at the Polytechnic University of the Valley of Mexico. One was intercepted before anyone could be harmed, but the second detonated, injuring a security guard. It is not clear how closely the group is tied to the Informal Anarchist Federation, but in online forums the two bodies offer “direct support” for each other’s activities and talk of a “blossoming” of a more organized eco-anarchist movement.

In the wake of the Mexican bombings, the Monterrey Institute installed metal detectors, began to use police sniffer dogs and started random inspections of vehicles and packages. After a letter bomb addressed to a nanotechnology researcher at the Polytechnic University of Pachuca in Hidalgo exploded in December last year, the institute installed a perimeter fence and scanners, and campuses across the state heightened security measures.

Italian police investigating the shooting say that they are concerned about the rise in violent action by anarchist groups amid Europe’s economic crisis. On 23 May, for example, members of the Informal Anarchist Federation attacked railway signals in Bristol, UK, causing severe transport delays. An online message from the group said that the targets had been chosen to disrupt employees of the Ministry of Defence and defence-technology businesses in the area, including Raytheon and QinetiQ.

The Swiss report also noted signs of “an increasing degree of international networking between perpetrators”. The level of risk to scientists depends on their field of work, says Simon Johner, a spokesman for the Swiss Federal Intelligence Service. “We are not able to tell them what to do. We can only make them aware of the dangers. It’s up to institutions to take preventative actions.” The agency is working with police forces, businesses and research communities to assess and tackle the threat.

“These people do not represent mainstream opinion. But I am still pretty frightened by this violence,” says Michael Hagmann, a biochemist and head of corporate communications for the Swiss Federal Laboratories for Materials Science and Technology near Zurich, a public-sector partner of the IBM facility that also does nanotechnology research.

“Just a few weeks after the attempted bombing, we were due to have a large conference on nanotechnology and we were really quite nervous” about going ahead with it, Hagmann says. “But we concluded that the public discussion was more important and didn’t want to scare people by having 20 police guarding us. It would have sent the wrong message.”