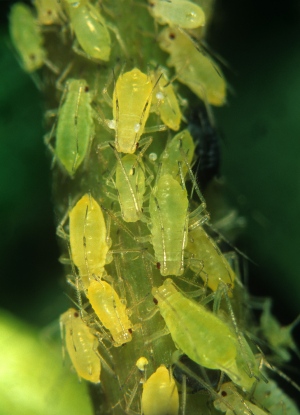 Potato aphids were less interested in mating when pressure changes heralded a storm.

People have long claimed that animals can predict the weather, for examply by curtailing their activity when rain threatens. Such theories have had little evidence to support them, but now, a team of scientists has found a concrete example: insects shy away from sex in response to the drop in atmospheric pressure that presages rain.

Researchers in the lab of José Bento, an entomologist at the University of São Paulo in Brazil, first got the idea of looking at the effect of atmospheric pressure on behaviour when they noticed something strange about their experiments with insects. “On some days, they didn’t work very well, we just didn’t observe much activity in the lab,” says lab member Maria Peñaflor. Most often, she says, this was when rain was predicted. Conditions such as light, temperature and humidity were controlled in the lab, so the researchers wondered whether the insects were reacting to falling pressure to try to protect themselves from damaging rain.

With colleagues at the University of Western Ontario in London, Canada, they tested how three unrelated species — the curcurbit beetle (Diabrotica speciosa), the true armyworm moth (Pseudaletia unipuncta) and the potato aphid (Macrosiphum euphorbiae) — reacted to changes in atmospheric pressure. The results are published today in PLoS ONE1.

Not in the mood

When atmospheric pressure was dropping rapidly, the male beetles became much less responsive to female pheromones. If placed close to female beetles they would still mate, but most skipped their usual courtship behaviours and went straight to copulation — as if they were trying to get it over with quickly, before a deadly storm arrived.

The moths and aphids had similar reactions. The females of both small, light insects reduced their 'calling' behaviour — wafting sex pheromones to attract mates — when rain threatened. Rising pressure, which can signal the approach of windy conditions, also put the creatures off their stride: female aphids, which must balance precariously on the edge of leaves to call, reduced their calling. Males of both species were less responsive to calling in both rising and falling pressure conditions than when the pressure was stable.

Bernard Roitberg, an entomologist at Simon Fraser University in Burnaby, Canada, thinks that the researchers' explanation for the changes in behaviour is correct. An “expectation of mortality” from, say, a change in pressure should alter an insect’s behaviour to maximize its chances of passing on its genes, he says. Roitberg made similar observations 20 years ago, showing that in falling atmospheric pressure, female parasitic wasps (Leptopilina heterotoma) looking for somewhere to deposit their eggs would lower their standards and use hosts that had already been parasitized2.

Bento suspects that insects use tiny hair-like receptors on their cuticle to sense pressure changes. The fact that similar behaviours were seen in insects from completely different orders indicates that the ability is widespread, says Bento. But Robert Matthews, an entomologist at the University of Georgia in Athens, says that more examples are needed before that can be confirmed. “There’s so much diversity in the insect world, it might be a stretch to generalize to all insects,” he says.

But, he adds, it does make evolutionary sense — especially for those that spend their entire adult life mating. “Sex is all some insects do. They need to be adapted to do it right.”