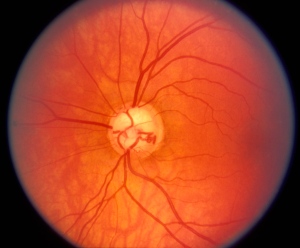 Glaucoma can be treated with latanoprost, a prostaglandin-like drug.

An iconic but convoluted pharmaceutical synthesis received a major overhaul this week. The approach, described online in Nature, gives researchers easier access to a family of molecules that includes a blockbuster drug.

The efficient new route to prostaglandins, a class of hormone-like chemicals that influence processes including blood circulation and inflammation, offers a way to churn out many different versions of the molecules. It also marks a victory for one of the hottest fields in organic chemistry: organocatalysis, which speeds up chemical reactions with the help of carbon-based molecules, potentially avoiding some of the drawbacks of conventional metal catalysts.

Prostaglandin-like drugs are tempting targets for medicinal chemists; one example, Pfizer’s glaucoma drug latanoprost, achieved annual sales of around US$1.75 billion before its patent expired in 2011. But it takes an arduous 20 chemical steps to make latanoprost using the original strategy developed in 1969 by Elias Corey at Harvard University in Cambridge, Massachusetts. The synthesis helped Corey to win the Nobel Prize in Chemistry in 1990.

Synthetic chemist Varinder Aggarwal at the University of Bristol, UK, realized that he could radically simplify the process by building the heart of a prostaglandin molecule in a different way. He applied a workhorse of organic chemistry, the aldol reaction, to build key carbon–carbon bonds in a prostaglandin’s five-atom ring, but used the amino acid (S)-proline as an organo­catalyst to make sure that the end product had precisely the right shape (G. Coulthard et al. Nature http://dx.doi.org/10.1038/nature11411; 2012). Corey’s approach takes nine steps to make a different intermediate with the same crucial ring.

The molecule produced in Aggarwal’s reaction serves as a foundation stone for the whole family of prostaglandins, and his method can produce grams of this building block at a time — a viable scale for drug-development work. Aggarwal and his colleagues used it to make the most complicated prostaglandin, PGF2α, which is very similar to latanoprost, in just seven steps (see ‘On target’). It’s “by far the single best approach to the prostaglandins”, says Ben List, an expert in organocatalysis at the Max Planck Institute for Coal Research in Mülheim an der Ruhr, Germany. As well as being shorter than Corey’s version, it is very specific at producing only left-handed or right-handed versions of the molecules — a crucial factor in making an effective drug. 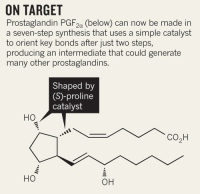 Whether the synthesis helps to deliver new drugs remains to be seen, says biomedical researcher Colin Funk at Queen’s University in Kingston, Ontario, Canada. “Prostaglandin-like drugs are still relevant, but the big thing has been to try and limit their side effects,” he says. That demands a better biological understanding, rather than a new synthetic route, he notes.

The method might prove useful in full-scale drug production, not only because of its simplicity but because it avoids expensive and toxic metal catalysts. “From an industrial perspective Aggarwal’s process is promising, and a remarkable lead,” says process chemist Rob Singer, who works at Pfizer Worldwide Research and Development in Groton, Connecticut. The synthesis would still need further development before it could be used at a production scale, he adds.

List says that most pharmaceutical companies are studying organocatalysts, but so far have tended to use them on only a small scale. As the chemical structures of drugs get more complicated, he hopes that organocatalysts will gain more prominence, and Aggarwal’s work should help to speed the change, he says. “It reflects the way that organocatalysis fundamentally changes the way we do catalysis,” he says.