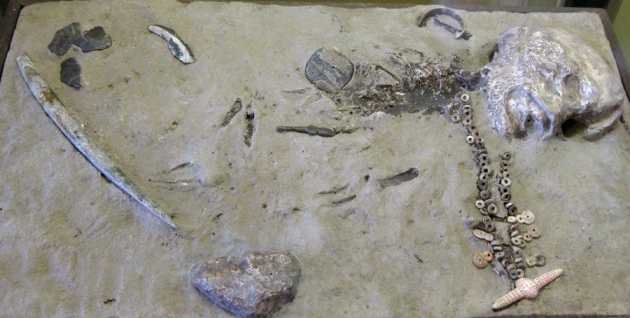 The remains of a boy from palaeolithic Siberia — shown here in a burial reconstruction at the Hermitage Museum in St. Petersburg — revealed that he had European genes.

The 24,000-year-old remains of a young boy from the Siberian village of Mal’ta have added a new root to the family tree of indigenous Americans. While some of the New World's native ancestry clearly traces back to east Asia, the Mal’ta boy’s genome — the oldest known of any modern human — shows that up to one-third of that ancestry can be traced back to Europe.

The results show that people related to western Eurasians had spread further east than anyone had suspected, and lived in Siberia during the coldest parts of the last Ice Age.

“At some point in the past, a branch of east Asians and a branch of western Eurasians met each other and had sex a lot,” says palaeogeneticist Eske Willerslev at the University of Copenhagen, who led the sequencing of the boy’s genome. This mixing, he says, created Native Americans — in the sense of the populations of both North and South America that predated — as we know them. His team's results are published today in Nature1.

In 2009, Willerslev’s team travelled to Hermitage State Museum in St. Petersburg, where it had arranged to collect a DNA sample from one of the Mal’ta boy’s arm bones. “We hoped that he could tell us something about the early peopling of the Americas, but it was a complete long shot,” he says.

The team found that DNA from the boy's mitochondria — the energy-processing organelles of living cells — belonged to a lineage called haplogroup U, which is found in Europe and west Asia but not in east Asia, where his body was unearthed. The result was so bizarre that Willerslev assumed that his sample had been contaminated with other genetic material, and put the project on hold for a year.

Nature's Kerri Smith gets the scoop from Eske Willerslev about his team's findings.

But the boy’s nuclear DNA — the bulk of his genome — told the same story. “Genetically, this individual had no east Asian resemblance but looked like Europeans and people from west Asia,” says Willerslev. “But the thing that was really mind-blowing was that there were signatures you only see in today’s Native Americans.” This signal is consistent among peoples from across the Americas, implying that it could not have come from European settlers who arrived after Christopher Columbus. Instead, it must reflect an ancient ancestry.

The Mal’ta boy’s genome showed that Native Americans can trace 14% to 38% of their ancestry back to western Eurasia, the authors conclude.

“The distribution of genetic lineages 24,000 years ago must have been quite different from what we see today,” says Jennifer Raff, an anthropologist and geneticist from the University of Texas at Austin. “It would be very interesting to see what other genomes from this time period look like.”

Willerslev’s team suggests that after the ancestors of Native Americans split off from those of east Asians, they moved north. Somewhere in Siberia, they met another group of people coming east from western Eurasia — the people to whom the Mal’ta boy belonged. The two groups mingled, and their descendants eventually travelled east into North America.

“We already had strong evidence of Siberian ancestry for Native Americans; this study is important because it helps us understand who the ancestors of those Siberians might have been,” says Raff.

This new origin story helps to resolve several peculiarities in New World archaeology. For example, ancient skulls found in both North and South America have features that do not resemble those of East Asians. They also carry the mitochondrial haplogroup X, which is related to western Eurasian lineages but not to east Asian ones.

“There remains some debate about whether there was a single expansion of human groups into the Americas or more than one,” says Theodore Schurr, an anthropologist from the University of Pennsylvania in Philadelphia. “The data from this paper support a single-migration scenario,” he says, but still allows for several sequential ones from the same intermingled Siberian gene pool.