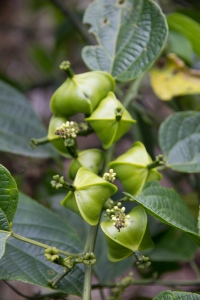 Oil from the seeds of Plukenetia carolis-vegae, discovered in the Peruvian Amazon, could be sold as a dietary supplement.

In a farmer’s garden deep in the Peruvian Amazon in August 2012, Rainer Bussmann and Carlos Vega struck oil.

The two men saw a plant they did not recognize. Its plump, green seed pods resembled those of a family of plants known in Peru as sacha inchi, which produce oil rich in omega-3 fatty acids. But the pods of the new plant, later dubbed Plukenetia carolis-vegae, were bigger than those sprouted by the known sacha inchi species Plukenetia volubilis and Plukenetia huayllabambana.

Bussmann, an ethnobotanist at the Missouri Botanical Garden in St Louis, and Vega, head of the Institute for Sustainable Local Development and Andean Amazon Cultural and Biological Conservation (INBIAPERU) in Trujillo, Peru, had stumbled on a species unknown to science. Now, they hope to transform it into a ‘conservation crop’ that can be raised commercially in the shade beneath the Amazon’s forest canopy, without cutting down any trees.

A farmer who introduced himself only as Rodriguez had found the plant in the forest near his log cabin. Familiar with sacha inchi and impressed with his find’s large seeds, he transplanted it to his garden. By the time Bussmann and Vega met Rodriguez, he and his family had developed a taste for the roasted seeds and had sold some of their harvest.

Bussmann, whose group discovered P. huayllabambana1 in the same area in 2008, says that P. carolis-vegae is more robust, producing bigger seeds and more leathery leaves. But he would rather focus on the two plants’ potential similarities.

If the lab results of P. huayllabambana are any indication, the seeds of P. carolis-vegae will be full of an essential omega-3 fatty acid that the body cannot make itself, α-linolenic acid (ALA). Bussmann hopes that the healthy reputation of sacha inchi oil will provide the impetus for large-scale cultivation of both species. If the shade-loving plants can be grown beneath the forest canopy, it could save trees that might otherwise be cleared for crops or for grazing.

Treats from the Amazon

Studies show that the types of omega-3 fatty acids found in oily fish help to protect against heart disease, arthritis, Alzheimer’s disease and even depression. But the evidence that ALA has the same effect is “mixed and inconclusive”, says Dariush Mozaffarian, an epidemiologist at the Harvard School of Public Health in Boston, Massachusetts. “There haven’t been any tests that have tested plant-based omega-3s alone and showed benefit.”

But even if sacha inchi oil does not turn out to be something that can be sold as a dietary supplement, it could be marketed as a niche food oil. Bussmann, who happens to have a bottle of P. huayllabambana oil in his office, says it is excellent in salads: the taste is nutty and green, evoking the flavours of peanut and cucumber.

Bussmann's work to develop crops from Plukenetia species seems to go beyond the traditional role of a scientist. But Ina Vandebroek, an ethnobotanist at the New York Botanical Garden, says that it is typical of the field. “Ethnobotanists should also have a social responsibility. Our task is not just to record knowledge and publish it in science papers, but to give something back to the people you are working with.” Crop development can be one way to do that.

Bussmann believes that large-scale cultivation of P. carolis-vegae is a few years off. The newly discovered species is still rare, he says. “There are only a couple dozen bushes.” On his desk, Bussmann keeps a single dried seed from the plant in a plastic bag. It is black and the size of a large cherry. “You can roast them and pound them and make hummus,” he says, with the avidity of a salesman. “They are tasty!”