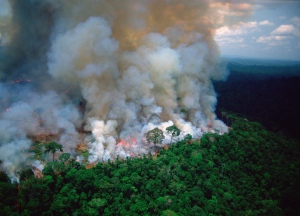 Fires in the Amazon cause a host of environmental problems.

A group of scientists from Brazil and the United Kingdom are taking an unusual tropical field trip: 21 days flying in and out of heavy smoke plumes from wildfires in the Amazon and measuring everything they can, from the size of cloud droplets to the thickness of the aerosol column up to the stratosphere.

The goal is to understand how burning biomass in South America is affecting the local weather and air quality, and to close crucial gaps in climate models about how the process changes Earth’s radiation balance.

The SAMBBA (South American Biomass Burning Analysis) mission uses a four-engine jet aeroplane carrying a suite of instruments that can take measurements up to 12 kilometres above the canopy. Previous airborne campaigns used smaller planes and flew at much lower altitudes, so were unable to observe some crucial physical processes. “The Amazon is dominated by high-altitude convection clouds. If we don’t understand how they process energy and how fires interfere with them, we can’t make good weather predictions,” says Paulo Artaxo, a physicist and climate scientist at the University of São Paulo in Brazil, one of the scientists leading SAMBBA along with researchers from Britain’s Met Office, Brazil's National Institute for Space Research (INPE), the UK's Natural Environment Research Council and several British universities.

One of the instruments on board is a LiDAR, a laser that measures how much light is being blocked by aerosol particles from smoke at various altitudes. That local “dimming” of the atmosphere hampers photosynthesis, sometimes dramatically: local-scale measurements have shown decreases in plant productivity of around 30%1. “We want to have an estimate for the whole Amazon”, says Artaxo.

More importantly, aerosols may actually produce cooling at the surface as well as warming at mid altitudes, says Karla Longo, a senior scientist at INPE and one of the 40 SAMBBA field researchers. Current models cannot account for such complex interactions, and therefore can’t accurately predict how increasing carbon dioxide concentrations and burning biomass will affect the radiation balance of the world’s largest tropical forest. “The very direction of the error signal in our models, whether it is towards warming or cooling, is hard to predict,” says Longo.

Ben Johnson, a member of the team from the Met Office, says that information on those aerosols is also important for improving global weather forecasts. “This is the first time we have measured biomass burning emissions from tropical forest with such comprehensive instrumentation.”

But SAMBBA will provide local benefits, too says Johnson. It is measuring substances that affect air quality in Amazonian cities, such as nitrogen oxides and other compounds that react to form polluting ozone at low altitudes. And ozone concentrations are known to be higher in the Amazon during the burning season than in the heavily polluted São Paulo metropolitan area. INPE has developed air-quality models that account for ozone and for particulate matter, but ozone-forming substances have never been measured before across the whole Amazon. One such compound, peroxyacetyl nitrate, was found in surprisingly high concentrations during SAMBBA’s first flights over Acre, in the Western Amazon. That kind of information will help to improve air-quality forecasting. “That result alone is worth the experiment,” says Artaxo.