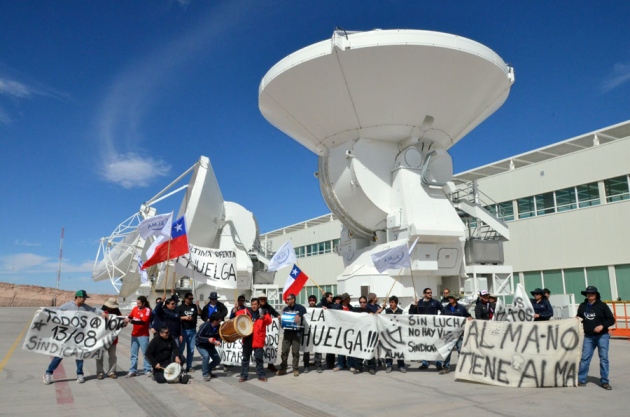 Striking workers at the ALMA telescope array occupied the operations building for more than two weeks.

Messages of support raced across Chile’s high desert plateaus. A labour strike had halted work at the world’s premier radio telescope, the Atacama Large Millimeter/submillimeter Array (ALMA), and word was spreading to other elite astronomical observatories in the country.

Suddenly, the Chilean workers who staff these observatories — from the engineers who keep telescope software going to the mechanics who service broken equipment — were sharing the world stage. As the strike began at ALMA, workers more than 300 kilometres to the southwest at the Paranal observatory put down their radios instead of handling after-hours calls — not in a strike, but as a gesture of solidarity.

The 17-day dispute at ALMA ended on 7 September, when the labour union reached an agreement with the management that included shorter work shifts and pay rises for some of the 195 union members. But the walkout, the first unionized strike at an international observatory in Chile, underscores the complicated relationship between the predominantly US- and European-funded observatories and their Chilean workers. At Paranal, which is run by the European Southern Observatory (ESO), workers say that the events at ALMA have emboldened them to speak out and ask for more concessions from management. “What the ALMA union did is open the road for every observatory in Chile to talk about what is going on,” says Nicolas Slusarenko, president of the Paranal union and a software engineer at the observatory’s Very Large Telescope.

The roots of many of the workers’ complaints date back to the 1960s, when US and European astronomers first began to build telescopes in the high Atacama Desert, which is coveted for its pristine night-viewing conditions. Chile, ruled through the 1970s and 1980s by dictator Augusto Pinochet, was viewed as a politically stable place. Construction and labour costs were cheap in comparison to those at other prime sites, such as Hawaii, and Chile was eager to lure investment. Over the years, Chilean governments have granted privileges to certain observatory workers, such as income-tax exemptions for European astronomers working in Chile — but such privileges do not apply to Chileans.

In practice, this means that the observatories are run like small states within Chile — a fact that rankles some union leaders. Slusarenko says that whereas unsafe Chilean businesses could be subject to inspection by a labour ministry agency, no such avenue exists at ESO sites. “Where do I go to protect employees?” he asks.

But the unions have been gaining strength. In the past couple of years, the Paranal union has added members from three other ESO locations to form a ‘sindicato’ with 105 members overall. And in April 2012, a federation representing about 500 workers was created by joining the ESO and ALMA unions with two others representing workers at US-run observatories.

Last November, a walkout was narrowly avoided at Paranal. The union voted to go on strike over issues such as maternity leave, but that was averted by an eleventh-hour agreement with ESO. That contract expires in November 2014, says Slusarenko, and he expects renewal negotiations to be stressful. “It will be interesting to see if they take into account what happened at ALMA,” he says. ESO management says that it has worked hard to develop good relations with its Chilean staff and does not expect any trouble. “We have no reason to expect any change to ESO operations as a result of the recent ALMA strike,” says ESO director general Tim de Zeeuw.

Chris Smith, who oversees operations in Chile for the Association of Universities for Research in Astronomy (AURA), a US-based group that operates three sites, also downplays the effect of the ALMA strike. He says that there is a family-like atmosphere at the AURA observatories, and management meets with union representatives every month or two to deal with any labour issues before things get too tense. The ALMA strike is an anomaly, he says. “I don’t want anyone to walk away thinking that this sort of conflict is the norm — it’s not.”

The ALMA strike began after the old labour contract expired and the ALMA union asked for changes in the new contract. The union wanted a 15% pay rise, plus other concessions that were standard at other observatories, such as a working week of 40 hours instead of 45 for administrative staff, and workdays of 11 hours instead of 12 for shift workers. Their employer, the US-based Associated Universities Incorporated (AUI), baulked, and the strike began on 22 August.

Workers occupied the main operations building and paraded underneath ALMA’s dishes with banners demanding justice. They produced a slick YouTube video (see go.nature.com/jl7z3r) with scenes from the strike. Science observations stopped completely, although some work continued — the project accepted delivery of its next-to-last antenna on 28 August, says Al Wootten, an ALMA project scientist. ALMA is a collaboration between, primarily, ESO, the US National Radio Astronomy Observatory (managed by AUI), and the National Astronomical Observatory of Japan.

After more than two weeks of negotiations, which included the personal intervention of the head of the Chilean labour department, the union and AUI signed a new two-year contract. The shorter working hours start in January, and employees who work at sites above 5,000 metres will receive a bonus, but the only pay rise granted was 4% to the lowest-paid union members. Staff were paid for their strike days and received a bonus for ending the strike. The AUI would not say how much the extra concessions would cost; ALMA director Pierre Cox will decide how to pay for them within the project’s fixed budget.

The final telescope antenna in the 66-dish array is scheduled for delivery this month, and science observations by principal investigators are expected to resume in early October, says Ethan Schreier, the AUI’s president. “We’re looking forward to just getting back,” he says. ■