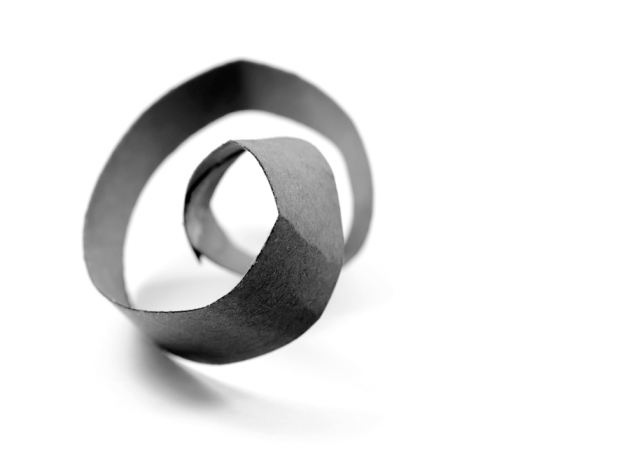 The topology of Möbius strips helps to explain the puzzling behaviour of electrons and other particles.

The King left his wife in 1972, but it wasn’t the break-up of Elvis and Priscilla Presley that bothered the eminent physicist Freeman Dyson at the time. He was more concerned about the difficulties he saw in an older and more fundamental relationship.

“The marriage between mathematics and physics, which was so enormously fruitful in past centuries, has recently ended in divorce,” Dyson wrote. He may have been right about the split, and the two disciplines have each gone their own way since. But they have continued to be close. And, just occasionally, the romance reignites.

Right now, maths and physics are seeing each other again. They have bonded over a shared exploration of bizarre states of matter. In the past decade or so, principles and ideas from the mathematical exploration of a field called topology have found their way into the laboratories of condensed-matter physicists.

As we describe in a News Feature this week, physicists have been discovering states of matter that are topological. This means that the states have properties that change in discrete increments — such as increasing the number of holes in a surface — and not over a continuum, as would result from increasing the size of those holes.

Maths can sometimes seem hopelessly abstract, even to mathematicians. But even the most abstract mathematical ideas often find a function, and it’s often physicists who benefit. Their discovery of topological effects in solid-state physics is only the most recent example. (See also an Article this week on topological quantum chemistry and the associated News & Views.)

Maths is often described as the language in which the laws of nature are written. Most physicists can get by in this language, but it’s still a foreign tongue and important distinctions are sometimes lost in translation. Maths and theoretical physics remain distinct disciplines, with largely different methods and priorities, and — with some exceptions — pursued by separate communities.

Some of the divergence is down to history. Maths has much older roots: it existed for millennia before Isaac Newton invented infinitesimal calculus as a way to lay the foundations of physics. There are cultural differences too. Most mathematicians pursue knowledge for its own sake, and typically consider ideas to be ‘deep’ if they establish surprising connections between different branches of maths. Physicists tend to be interested in mathematical theories only to the extent that those theories formalize or elucidate some physical phenomenon.

And mathematicians and physicists often disagree on what questions are interesting or important. Take the quantum theory of electromagnetism, for example, the field to which Dyson made his most notable contributions. It is arguably the ‘most correct’ scientific theory in history, because it predicts the results of experiments with unparalleled precision. But its mathematical foundations are still somewhat less than rigorous, from a mathematician’s perspective. In his 1972 remarks, Dyson identified this as a possible area where maths and physics needed to be reconciled.

“Many of the major breakthroughs in topology were inspired by physics ideas.”

Dyson traced the tension between the two disciplines to the second half of the nineteenth century, when mathematicians were slow to recognize the significance of James Clerk Maxwell’s (pre-quantum) equations of electromagnetism. Others have blamed the communities’ divergence on mathematicians such as Hermann Weyl, who helped to lay the foundations of quantum mechanics but then failed to communicate his ideas in terms to which the typical physicist could relate.

Still, maths will usually find a way. Most big maths ideas are found reflected somewhere in the Universe and are relevant to physicists’ attempts to understand it, even if it takes a while for the connection to be made. It happened to some of Srinivasa Ramanujan’s obscure writings in mathematical analysis from a century ago, which have emerged to be of possible significance in the quest to understand black holes.

Physicist Eugene Wigner famously dubbed this “the unreasonable effectiveness of mathematics in the natural sciences”. But a lesser-known phenomenon is what can be called the unreasonable effectiveness of physics in mathematics. In particular, the roots of the interactions between physics and topology go deeper, and many of the major breakthroughs in topology of the past few decades were inspired by physics ideas. Solving equations from quantum physics, for example, has led topologists to discover surprising and exotic phenomena in 4D space.

The path that mathematicians and physicists share has rarely run smooth. But at least they are both heading in the same direction. They should keep talking — every now and then, with a little more conversation, they can leave science all shook up.