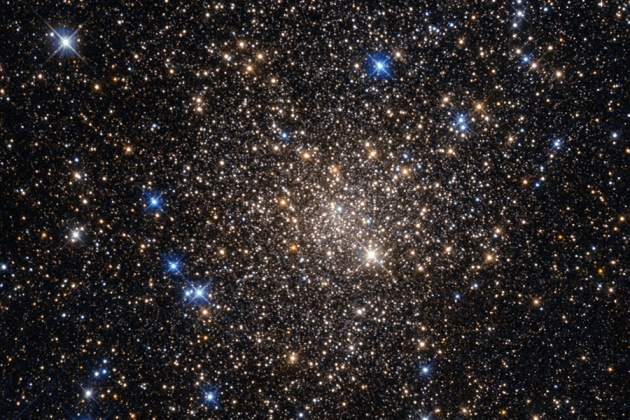 Globular clusters such as Terzan 1 (shown here) contain some of the oldest known stars.

Astronomers may be looking for alien life in all the wrong places. They should be hunting in the dense, old neighbourhoods of stars known as globular clusters, a study suggests.

Until now, scientists have largely discounted the idea of finding extraterrestrial civilizations in globular clusters, which each contain thousands to millions of stars. Out of the thousands of known extrasolar planets, only one has been found in such a cluster, and many astronomers think that the gravitational interactions among tightly packed stars would have long ago hurled any accompanying planets into deep space.

But the proximity of all those stars may actually be an advantage for supporting life, says Rosanne Di Stefano, a theoretical astrophysicist at the Harvard-Smithsonian Center for Astrophysics in Cambridge, Massachusetts. Lots of closely packed stars could also mean lots of planetary systems within easy travelling distance. “If there is an advanced society in an environment like that, it could set up outposts relatively easily, because we’re dealing with distances that are so much shorter,” she says.

With such networking, civilizations in a globular cluster might endure for billions of years, and thus be around for humans to communicate with today or in the future.

Di Stefano reported the work — which she did with Alak Ray of the Tata Institute of Fundamental Research in Mumbai, India — on 6 January at an American Astronomical Society meeting in Kissimmee, Florida.

Globular clusters contain blobs of stars that hover together like swarms of fireflies. The Milky Way is home to about 150 globular clusters, which contain some of the oldest known stars — dating back 10 billion years or more.

In 1974, scientists beamed one of the most famous search for extraterrestrial intelligence (SETI) messages to the globular cluster M13 using the Arecibo radio telescope in Puerto Rico. But in the decades since, globular clusters have fallen out of favour for SETI hunts. The only planet known to reside in a globular cluster orbits an ancient pulsar, an environment that is unfriendly for life1. And targeted searches have failed to turn up more exoplanets in these clusters2.

But that does not mean that such planets do not exist, says Luca Pasquini, an astronomer at the European Southern Observatory in Garching, Germany. He and his colleagues found planets in an open cluster, in which stars are typically billions of years younger and less densely packed than those in globular clusters3. Astronomers had been sceptical of finding planets in open clusters until they looked, he notes; for globular clusters, he says, “there is room for very exciting discoveries” if scientists continue to probe.

Di Stefano and Ray began their work after thinking about the advantages that a globular cluster could offer alien life. If a civilization is close to another star system, “interstellar travel becomes a whole different thing”, Di Stefano says. Civilizations could theoretically hop from star to star if threatened by cosmic dangers or extinction.

This ease of travel, combined with the ancient age of globular clusters, suggests that intelligent life could exist in these systems for longer than in many other places, Di Stefano says. “The civilization might eventually be destroyed,” she adds, “but it would have a better opportunity at transferring members of itself and its knowledge.”

By analysing the distances between stars in various globular clusters, DiStefano and Ray identified a “sweet spot” where conditions would be stable enough for a planet to form and survive for billions of years. The sweet spot varies from cluster to cluster, but corresponds to an interstellar distance of roughly 100 to 1,000 times the Earth-Sun distance. If stars are spaced at roughly this distance within a cluster, then civilizations on planets around those stars would not have all that far to travel — or to communicate — with the next star system.

Finding these hypothetical planets is the next challenge. Di Stefano has a list of globular clusters that she would like planet hunters to target: at the top is one called Terzan 5 near the centre of the Milky Way.

But science fiction is already way ahead of her. Isaac Asimov’s classic short story 'Nightfall' features a civilization that lives in a globular cluster — although that particular race loses its collective mind when all six of its suns set at once.