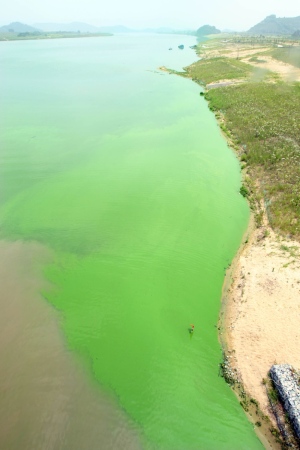 Environmentalists in South Korea are blaming a major river project for the algal blooms currently choking several of the nation’s waterways.

The Four Major Rivers Restoration Project was completed last October at a cost of 22 trillion won (US$19.3 billion). Covering the Han, Geum, Nakdong and Yeongsan rivers, the project built 16 dams and dredged 520 million cubic metres of mud from the river beds in a bid to make flood prevention simpler.

But environmentalists say that the dams have turned parts of the rivers into standing water — ideal breeding ground for the cyanobacteria that make up algal blooms.

Unusually, the blooms appeared last winter, and have reappeared this summer causing a major scare over the quality of the country’s drinking water. Algae are most seriously affecting the Nakdong and the Han, which supplies water to more than 10 million people living in Seoul and the surrounding area.

The blooms have been so severe that Seoul's metropolitan government has advised residents to boil any tap water they intend to drink. Sales of bottled water have soared and the bright green hue of the Han has led locals to christen it ‘the green algae latte’, after a popular green-tea drink.

The South Korean government maintains that the dams are not to blame and that the blooms have been caused by the year’s unusually long heat wave and associated drought.

Jae Park, an environmental engineer at the University of Wisconsin–Madison, agrees. He says that a combination of plenty of sunlight and high levels of nutrients in the rivers, rather than slower flow speeds, is responsible for the the algal outbreak. In fact, the algae do not seem to thrive in water deeper than 3 metres, so by creating a number of deep reservoirs, the dams have helped to curb algal growth.

“Paradoxically, if the Four Major Rivers Restoration Project had not been launched, there might have been an even bigger algal bloom,” he says.

But Jung Wk Kim, an emeritus professor of environmental engineering at the Seoul National University, places the blame squarely at the feet of those who restored the rivers and slowed water movement within them. “The rivers must flow,” he says. He believes that all 16 dams from the restoration project need to be opened to prevent more blooms.

The blooms have been receding in the past few days, as heavy rains have begun to dissipate the algae. South Korea's environment ministry has set up a ten-person department to safeguard the nation's water quality. The department is not a direct response to the blooms, says Yong Tae Sin, a ministry official. But, he adds, one member of the panel will be charged with monitoring for any water pollution resulting from algal blooms.