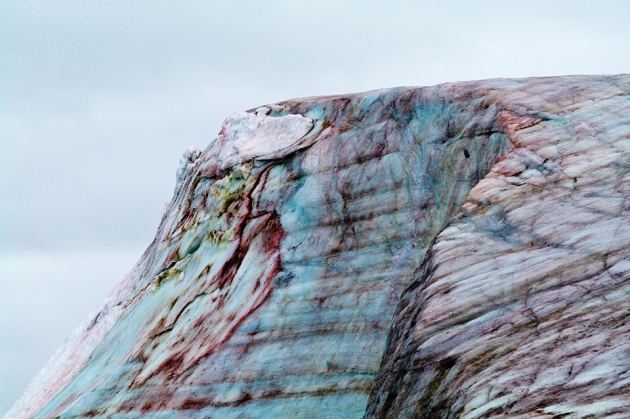 Algae that live on snow and ice produce a kaleidoscope of colours.

Researchers are fanning out across the Greenland ice sheet this month to explore a crucial, but overlooked, influence on its future: red, green and brown-coloured algal blooms. These darken the snow and ice, causing it to absorb more sunlight and melt faster.

The £3-million (US$4-million) Black and Bloom project aims to measure how algae are changing how much sunlight Greenland’s ice sheet bounces back into space. “We want to get a handle on just how much of the darkness is due to microbes and how much to other physical factors”, such as soot or mineral dust, says Martyn Tranter, a biogeochemist at the University of Bristol, UK, and the project’s principal investigator.

Team scientists arrived near Kangerlussuaq, Greenland, this week for 6 weeks of observations. The work will continue for two more summers, exploring different parts of the ice sheet. Ultimately, the scientists hope to develop the first deep understanding of  how biological processes affect Greenland’s reflectivity.

From these results, climate modellers should be able to improve their estimates of how the ice sheet  —  which contains enough water to raise sea levels by seven metres — is likely to melt in the coming decades. The past several years, as well as the current one, have seen temperature and melting records set across Greenland.

Tranter adds that the work could also affect predictions of water supplies in other areas, such as the Himalayas, where algal blooms dot water-producing glaciers.

For decades, most studies on Greenland microbiology focused on cryoconite holes, small pits on the surface of the ice sheet that are filled with dark organic matter and ice-adapted algae. But enormous blooms of photosynthetic algae also cover the snow-strewn ice sheet every summer1. Some, such as Chlamydomonas nivalis, spread first as greenish blooms as they begin to photosynthesize, and then turn a reddish colour as they produce carotenoid pigments to protect themselves from the sun’s ultraviolet rays.

“They’re extremely lazy algae — they sleep for nine months and then wake up and have a party,” says team member Liane Benning, a biogeochemist at the University of Leeds, UK, and the GeoForschungsZentrum research centre in Potsdam, Germany.

The algae creates vast, colourful fields of what is popularly known as 'watermelon snow'. Last month in Nature Communications, Benning and her team reported sampling watermelon snow at glaciers across the Arctic2. They found 6 types of algae living at 40 red-snow sites in Norway, Sweden, Greenland and Iceland. By comparing the optical properties of red snow to clean snow, they estimated that algal blooms could reduce reflectivity by 13% over the melting season. “Wherever we look, the impact is quite dramatic,” Benning says.

After the snow cover melts for the season, other species of alga take over. These ice-adapted algae are typically brownish-grey, less visibly dramatic than the red and green blooms but just as important for darkening the ice sheet. Only in the past few years have scientists begun to realize that some of the dark particles on the ice sheet are in fact these ice algae and not soot, Benning says.

Tranter says he got the idea for Black and Bloom about four years ago, when he was working on the margins of the Greenland ice sheet and forgot his glacier goggles. He put his shaded cycling glasses on instead, and suddenly colour popped out at him. “Everywhere the ice surface was melting I could see a mauve colour,” he says. “I said guys, there’s tons of algae growing in this rotten ice.”

Black and Bloom is the first effort to systematically explore algae’s role in darkening ice sheets3. This initial field season focuses on southwest Greenland, at a 'dark snow' site where collaborators Jason Box and Marek Stibal of the Geological Survey of Denmark and Greenland have been quantifying the soot and mineral dust that settles onto Greenland. Now the microbiologists have arrived with equipment to sample the various algal and bacterial species that pockmark the ice.

The heart of Black and Bloom is a study region half a kilometre long on each side. Here, the researchers will collect samples of black carbon and microoganisms while measuring incoming sunlight and reflectivity. They will also venture out on transects, both on foot and using unmanned aerial vehicles, to get a broader perspective on the algal blooms.

With longer melting seasons over the past few years, the algae have more time to bloom and darken the sheet, Tranter says. Next year, the team plans to go out earlier in the season, to be there in May when the snow begins to melt and the algae wake from their winter nap.