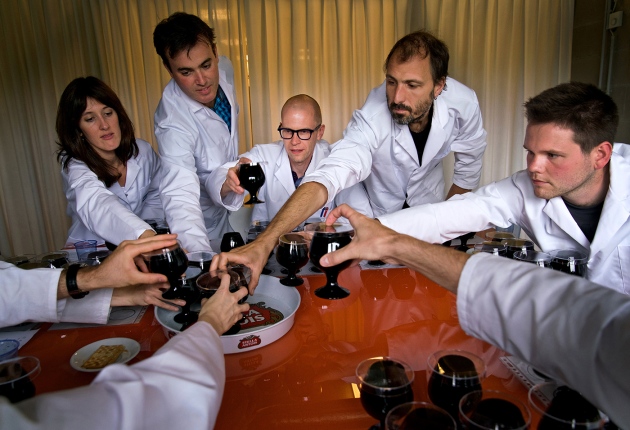 Kevin Verstrepen (centre) leads a beer-tasting session in his lab at the University of Leuven in Belgium.

Geneticists have traced the history of beer’s most important ingredient: yeast. By sequencing the genomes of nearly 200 modern strains of brewer’s yeast, the research reveals how, over hundreds of years, humans transformed the wild fungus Saccharomyces cerevisiae into a variety of strains tuned for particular tipples.

Yeast gives beer its booze and bubbles by fermenting sugar into alcohol and carbon dioxide, but it also makes hundreds of chemicals that impart flavours such as bananas and cloves to a drink. Brewing yeasts differ in their production of these metabolites and in other traits such as their tolerance to alcohol.

To understand the basis for these differences, a team led by geneticist Kevin Verstrepen at the University of Leuven and the Flanders Institute of Biotechnology in Belgium, sequenced the genomes of 157 S. cerevisiae strains used to make ale and other fermented products, including wine, saké and bread . Their work is detailed in an 8 September Cell paper1.

An evolutionary tree of the yeast strains revealed distinct families of yeast used for making wine, bread and saké, and two distantly related groups of ale yeast, including strains from Belgium, Germany, Britain and the United States.

“This is a genomic encyclopaedia of ale yeasts that will serve researchers for years to come,” says Chris Hittinger, an evolutionary geneticist at the University of Wisconsin–Madison. Verstrepen’s team, meanwhile, is using genomics to churn out new strains of beer yeast.

Beer is one of civilization’s oldest intoxicants. A 5,000-year-old Sumerian tablet depicts an ancient keg party, while similarly aged pots from western Iran and northern China hold residues of beer ingredients, including barley and fermentation by-products. Given that history, Verstrepen expected the ancestors of modern brewing yeasts to date back thousands of years.

Instead, his team estimates that humans domesticated beer yeasts starting in the late sixteenth and early seventeenth century. This, he says, coincides with a period in Europe when beer-making moved from homes to pubs and monasteries. He suspects that early professional brewers took yeast with them when they moved around Europe and even to the New World: US beer strains, for instance, are closely related to British strains.

Brewers did not isolate the first yeast strains until much later, in the late nineteenth century — but they may have inadvertently shaped the genomes of yeast by brewing each new batch of beer on top of the dregs of the last one, Verstrepen proposes. Through this practice, brewers might have slowly selected yeast strains that perform well and produce desirable flavours.

An independent team led by José Paulo Sampaio, an evolutionary geneticist at the New University of Lisbon, came to many of the same conclusions as Verstrepen’s team about how humans shaped beer yeast, after sequencing 28 beer yeast strains. That study will appear next month in Current Biology.

Hittinger says that he’s not sure about the finding that beer yeast was domesticated in the 1600s. Those dates are based on a DNA mutation rate for yeast that is 50 times faster than those estimated by other studies; a slower mutation rate would mean that beer domestication occurred much earlier than the study suggests. But Verstrepen stands by the calculation — yeast mutates rapidly when living in alcohol, he notes.

Although all the industrial yeasts bore signs of human influence, the beer yeast genomes were the most dramatically altered. Beer-making strains carry variations and duplications in genes involved in consuming maltose and maltotriose, the main sugars in beer.

Most of the beer yeasts had variations that limit production of 4-vinyl guaiacol (4-VG), which imbues clove and smoke flavours that many beer drinkers loathe. One exception was yeast used in German wheat beers called Hefeweizens, which typically smell of cloves. The genomes of these strains contain stretches of DNA — including the genes that make 4-VG — that seem to originate from wine yeast. Verstrepen thinks that these strains emerged when an ale strain hybridized with a wine-making yeast, regaining the capacity to make the clove-smelling chemical.

The newly available genomes may also shake up beer-making. Verstrepen’s lab is breeding different yeast strains and selecting hybrids with a desired set of gene variants. For the Cell paper, they made a hybrid strain with high alcohol tolerance that does not produce 4-VG.

His lab has brewed with genetically modified yeast to make a beer with very high levels of a banana-tasting chemical, but he only distributes yeast created through conventional breeding to breweries. Loren Miraglia, a home brewer in San Diego, California, who provided some of the sequenced strains in the Cell paper, has thought of modifying beer yeasts with the gene-editing tools he uses in his job at a genomics institute. However, he doubts that consumers are ready for CRISPR beer.

Hittinger imagines beer bottles carrying information about traits such as 4-VG production, which is determined by variations in genes called PAD1 and FDC1. “It’s one of the major flavours that causes me not to like certain beers,” he says. “I would check the PAD1 and FDC1 status of a beer before I ordered it.”