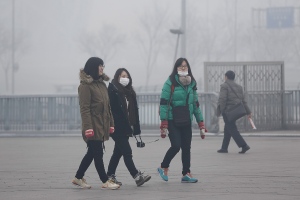 Pregnant women who have been exposed to higher levels of some types of air pollution are slightly more likely to give birth to underweight babies, a large international study has found. The results are published online today in Environmental Health Perspectives1.

Low birth weight — defined as a newborn baby weighing less than 2.5 kilogrammes — increases the risk of infant mortality and childhood diseases, and has been associated with developmental and health problems later in life, including diabetes and cardiovascular disease.

Previous studies have looked at whether exposure to tiny airborne particles during pregnancy leads to more low-birth-weight babies. Although many studies have found links, others have failed to establish a connection.

“The thorn in the side of many studies of air-pollution exposure and impact on fetal growth has been the variability in study design and in exposure assessment,” says Leonardo Trasande, a children’s environmental-health researcher at New York University in New York city. “This one does a tremendous service by making them very comparable.”

The observational study pooled data from 3 million births at 14 research centres in 9 countries, including the United States, South Korea and Brazil. It focused on two classes of hazardous air pollutants: inhalable particulate matter (PM) with a diameter of less than 2.5 micrometres (PM2.5) and of less than 10 micrometres (PM10). These particles are produced from the combustion of fossil fuels by industry and transportation and from burning firewood, but can also include particles of dust or sea salt.

By the authors’ calculations, each increase in PM10 by 10 micrograms per cubic metre (μg m–3) was associated with a 3% higher chance of an infant being underweight and with an overall average weight reduced by 3 grammes. That reduction in average weight tripled to 9 g when the authors adjusted for local variables such as maternal age or tobacco use. The calculations took socioeconomic status into account.

The median PM10 value varied across the 14 sites, from 12.5 μg m–3 in Vancouver to 66.5 μg m–3 in Seoul. For a subset of centres that included information on PM2.5 exposure, the odds of lower birth weight increased by 10% for each increase in exposure.

As Trasande explains, the risks are small at the individual level, but “on a population basis, a shift can produce large increases in the percentage of low-birth-weight infants”, he says. Smoking, alcohol and drug use and poor maternal health are also linked to low birth weights.

In a study of more than 220,000 US births published last month, Trasande and his colleagues found that outdoor air pollution was associated with longer hospital stays and greater health-care costs2. In 2010, 8.2% of infants born in the United States were of low birth weight.

The authors of the latest study made efforts to control for socioeconomic and lifestyle factors that might skew the results. However, some of those adjustments had limitations. Not all centres included information about whether the mother smoked during pregnancy; maternal education and address were used as proxy measurements to give an idea of socioeconomic status; and the mothers' exposure to air pollution during pregnancy was estimated rather than measured directly.

Despite such limitations to studying these effects, “we are getting more and more consistent signals that particles are related to these birth outcomes and they may affect prenatal development,” says Beate Ritz, an environmental epidemiologist at the University of California, Los Angeles. She has studied the connection between particulate matter and birth weight in California since the 1990s, but was not involved in the latest analysis.

Epidemiologists are concerned that some of the effects of a mother's exposure to air pollution may not be seen until several decades after her children are born. “If you think of what is happening in China, that doesn’t bode very well,” says Ritz, referring to recent reports of dangerous air-pollution levels in some Chinese cities. For example, in late January, the 24-hour average reading for PM2.5 in Beijing reached more than 460 μg m–3 according to the US Embassy there; China’s Ministry of Environmental Protection reported a lower figure of around 350 μg m–3.

The World Health Organization recommends that countries establish rigorous air-pollution standards of an annual mean of 10 μg m–3 for PM2.5 and 20 μg m–3 for PM10. The US Environmental Protection Agency recently strengthened its annual PM2.5 standard by decreasing it from 15 μg m–3 to 12 μg m–3. The agency estimates that meeting this standard will provide health benefits worth between US$4 billion and $9.1 billion annually by 2020.

“The impacts of air pollution on pregnancy have not been considered when setting up the regulations,” says Dadvand. “Now is the time to start thinking about it.”