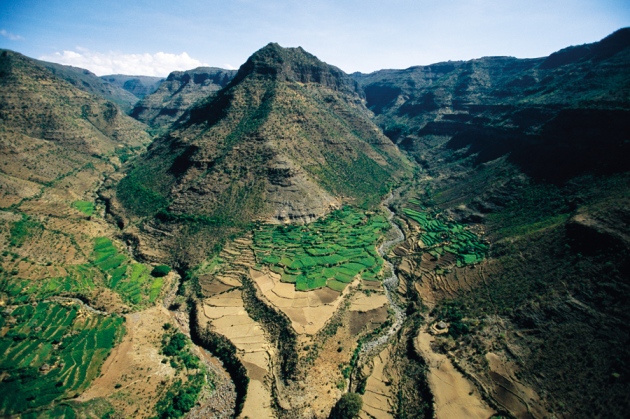 Ensuring that the world's food needs are met by 2050 will take a doubling of global food production1. To improve agricultural yields on that scale will require a radical rethink of global water-management strategies and policies.

Sub-Saharan Africa is the epicentre of this challenge. The region's population is set to more than double by 2050 to almost 2.5 billion, or 25% of the world's projected population2. Half of its current one billion inhabitants lives in extreme poverty, one-quarter is undernourished, and one-fifth faces serious water shortages. Although almost two-thirds of the population are rural, agriculture on much of the land is limited by scarce, variable and unpredictable water resources3.

Ninety-five per cent of sub-Saharan agriculture depends on 'green water': moisture from rain held in the soil. In large parts of the continent, most rain evaporates before it generates 'blue water', or run-off, so little of it recharges rivers, lakes and groundwater. Most farming communities are a long way from rivers4 and cannot use irrigation. Arid deserts and semi-arid savannahs comprise 40% of the region's land area. These receive too little surface run-off (less than 100 millimetres a year) to grow maize (corn), rice, millet and sorghum (which requires at least 400 mm per year) using irrigation alone. Future rainfall will be more variable and could be 25% lower in many semi-arid regions if average global temperatures warm by 2 °C above pre-industrial levels5.

Management of green water for rain-fed, small-scale farming is integral to eradicating hunger. But it is missing from the draft United Nations Sustainable Development Goals (SDGs), which will be agreed in September. A dedicated water goal that includes science-based targets and indicators is essential and must receive attention during the SDG negotiations in New York next week, in the wake of the World Water Day on 22 March.

We propose an approach for the SDG goal that will improve water security, address hunger and poverty and enhance carbon storage. Retaining more rainwater in soils and storing run-off would bridge dry spells that last weeks, the major challenge to rain-fed food production. For longer droughts, social and economic strategies are needed to assure food security.

Water flows across the SDGs — from improving water, sanitation and health to ending hunger and poverty. But there has been no discussion so far about how water resources should be managed to meet the aims. The goals are vague and assume — as have global water policies for decades — that water for all needs can be drawn from rivers, lakes and groundwater. 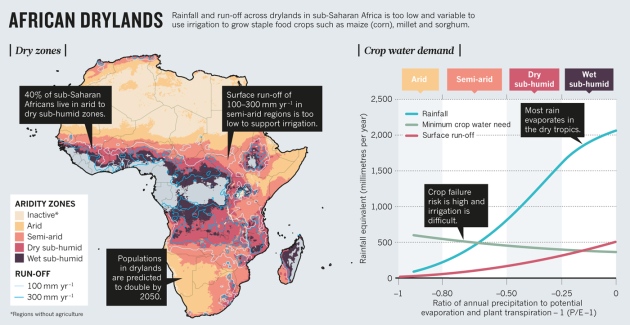 This blue-water bias stems from the modernization of water infrastructure starting in the 1950s, when most dams and pumping stations were built. Since then, water management has been viewed mainly as an engineering challenge. Conventional green-water practices, such as soil and water conservation and water harvesting, are seeing a resurgence worldwide in areas where irrigation is impractical. But the importance of supporting rain-fed agriculture has not yet been translated into investment strategies and policies for development.

Regions in which irrigation is not viable include highly populated places such as Africa's Sahel region, northern China and central India. In sub-Saharan Africa, almost 500 million people live in dry zones — deserts, grasslands and bush savannahs — in countries such as Mali, Niger and Zimbabwe. Another 245 million live in slightly wetter zones with forest savannahs, for example in large parts of Tanzania and Zambia, where run-off is still too low to irrigate fields (see 'African drylands'). In any case, river water is needed mainly for urban, industrial and energy needs.

When crops fail, the reason is usually an extended dry spell, or one at a crucial point in the growing season, such as the flowering period, rather than low rainfall. Several weeks without rain are common and may occur each season, sometimes with a devastating effect. In 2000, when an early onset of the rainy season followed by 6–9 weeks without rain prevented staple crops such as maize from growing in Kenya, 4 million people across the country faced severe food shortages.

Rainfall is becoming more erratic. Zambia, Malawi and Zimbabwe have experienced later rainy seasons, longer dry spells and fewer rainy days over the past 50 years than before6. The cause is uncertain but may be linked to anthropogenic climate change.

Green water can be retained in three ways: collecting run-off; improving the infiltration of rain in soils; and managing land, water and crops across watersheds to increase water storage in soils, wetlands and the water table7.

Small-scale water harvesting methods include terracing to conserve soil moisture, as in the famous Fanya-juu terraces of Machakos, Kenya; or using dams and ditches to channel run-off into fields, as widely used in Eritrea and Israel. Storage systems such as ponds, tanks and sub-surface storage in sand and soil, used in places such as northern Mexico, Ethiopia, Sudan and India, offer another approach. Together these systems can hold the equivalent of a few rainy-season deluges, enough to bridge month-long dry spells.

Water harvesting has been introduced to several parts of Africa, including Kenya and Tanzania, since the 1980s by non-governmental and development organizations including the UN. It has improved the stability of crop yields and can raise productivity from 1 tonne per hectare to 3–4 tonnes8. 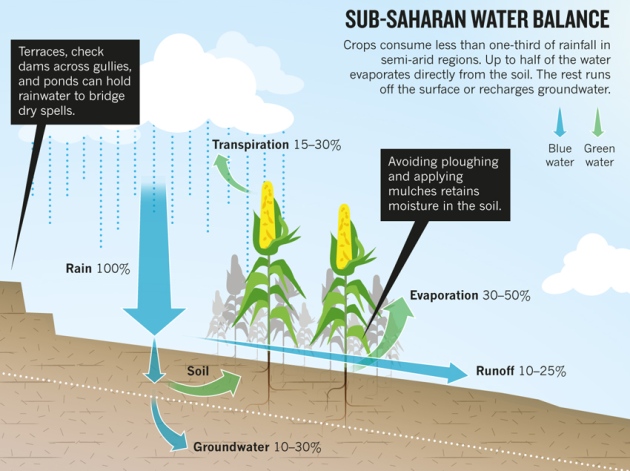 The technique is also proven elsewhere. In India, some state governments and community organizations have revived water-harvesting methods. The state of Karnataka has in all its 30 districts piloted integrated land and water management — including water harvesting — raising crop productivity. Dams, gullies and ponds combined with improved water, nutrient and crop management have increased Indian crop yields from around 1 tonne per hectare to 5 tonnes7. China's arid Gansu province supplies water to the homes of 2 million people using small, spherical sub-surface tanks to collect rainwater, and is increasingly using water harvesting in agriculture9.

Soil, nutrient and crop-management strategies are also needed to boost yields. One of the most promising practices is abandoning the plough, which has proven to be an effective way of burning soil carbon — by exposing it to sun and oxygen — causing emissions of carbon dioxide. Ploughing compacts and encrusts the soil, preventing rain from infiltrating and increasing run-off. Conservation tillage instead avoids turning the soil to allow its structure and microorganisms to build up.

Applied to the world's croplands, conservation tillage could increase carbon uptake by 1 gigatonne of carbon per year, or one-ninth of current global emissions10. It would have three benefits: mitigating climate change; increasing crop yields by adding green water; and reducing soil degradation through lower surface run-off. Used on more than one-third of US farmland, such methods are increasingly being adopted in Africa, for example in Ethiopia, Zambia and Zimbabwe.

Mulches and canopy cover cut evaporation. The limiting factor is the extremely nutrient-poor soils across savannah farming systems, particularly in Africa. Nutrients can be added through fertilizers, manure and composts. Raising nutrient applications from the current African average of less than 10 kilograms of nitrogen and phosphorus per hectare per year to 50–100 kg (still less than the global average) could boost productivity many times over.

Green-water-management strategies need to span scales — from fields to watersheds and river basins. Diverse sets of ecosystems should be protected to dampen the effects of flash floods and encourage underground flows to avoid erosion from run-off. Wetlands, meandering rivers, forests and patchy landscapes are natural capital assets that build resilience.

Watershed and river-basin management also protect local rainfall. Much tropical rain is convective — clouds produced from rising vapour over forests generate rain downwind. For instance, moisture from the West African rainforests in the south causes rain to fall on the semi-arid savannah in the north.

Rapid population growth2 however means that even with the most optimistic yield improvements it is unlikely that Africa will be self-sufficient in food by 2050. Particularly at risk are countries in the Sahel region, northern Africa and the Horn of Africa.

Food trade will be necessary to supplement crop growth for at least 30 African nations3. This calls for economic development — industries supported by blue water — to generate purchasing power. Regional economic policies that protect national food production while facilitating food trade will be needed. Emergency responses will also be required to cope with inevitable crop failure. These could include resilience strategies such as social-security systems, cereal banks and insurance to compensate farmers for crop failure.

The SDG framework should reflect this integrated water agenda. A specific target on sustainable management of rainfall for ecosystems and food production in water-scarce regions of the world is necessary to fulfil the goals on eradicating hunger and poverty and enabling long-term economic development.

Large institutions and foundations that invest in African development, such as the African Development Bank, the World Bank and the Alliance for a Green Revolution in Africa initiative, should invest in capacity development, planning and infrastructure development for small-scale water harvesting systems. The costs are large: investments of around US$10 billion to $20 billion per year for 10–15 years would be needed, comparable with those for basic sanitation, infrastructure and water supply. But they offer returns in terms of development and resilience.

National governments need policy shifts. Water and agriculture are typically handled by separate ministries. Water and food need to be integrated and managed in the same political sphere, preferably together with the environment, to enable sustainable and efficient blue- and green-water management in agricultural ecosystems and landscapes.

Hiding the African Achilles' heel of water scarcity behind unclear wording in the SDGs is a grave mistake. Without connecting water, food, growth and poverty, the sustainable development framework will not deliver on its promise to Africa.