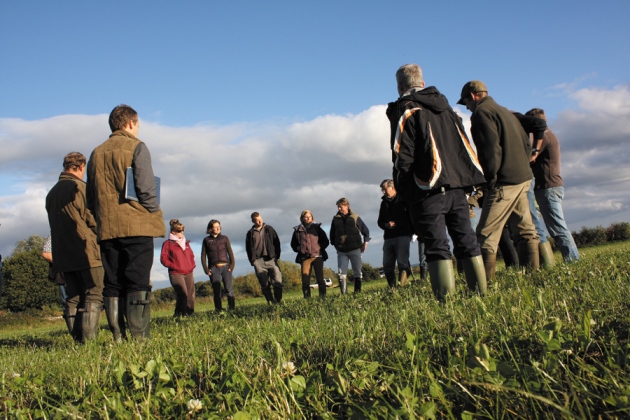 Climate change threatens a creaking food system in which harvests are already lagging behind rising demand1, 2. A sustainable supply of food hinges on agricultural innovation, but current investments neglect a key area for improving yields.

Since the 1970s, agricultural research and development (R&D) has invested mainly in a few research institutes equipped with cutting-edge instruments. For example, the Biotechnology and Biological Sciences Research Council, responsible for much of the public research spending in food security in the United Kingdom, invested 27% of its 2010–11 budget in just three institutes. Multinational seed and agrochemical companies invest billions of dollars to develop products in hopes that they will be used by millions of farmers.

This one-size-fits-all approach has had qualified success. In a 2011 analysis3, average global crop yields increased by 56% between 1965 and 1985, and by 20% from 1985 to 2005, underpinned by increasing inputs of non-renewable resources.

But advances are slowing. According to a 2013 study4, yields have plateaued in some of the world's most important food-producing regions, including east Asia (for rice) and northwest Europe (for wheat). In some countries, yields have declined.

The next wave of innovation must be at smaller scales. What one farmer can do to boost yield or efficiency is not necessarily the same as for a farmer hundreds of kilometres away with different soil, microclimate, topology and methods. How well crops and livestock grow depends on the interaction of genes, management and environment. As weather patterns fluctuate, gains in production will depend ever more on innovating in context. Big knowledge flowing from institute to farm must be complemented by local knowledge.

Enhancing farmers' own R&D could reap big rewards for minimal extra cost. Farmers everywhere are practical experimentalists who understand the idiosyncrasies of their land5. Modern agronomy evolved out of practices such as rotating crops to rebuild soil nutrients, fertilizing fields with manure, and adding lime to soil to alter pH. Even technologies not invented by farmers — new kit, seeds or chemicals — are adapted by them to fit their circumstances.

Reporter Geoff Marsh meets farmer John Pawsey to discuss the research he is conducting on his farm.

Such essential contributions are rarely recognized in official assessments of agricultural R&D. These count farmers as users, rather than makers, of knowledge. When the US Department of Agriculture tots up the US$20 billion that the global private sector invests annually in agricultural R&D, it does not include that done by farmers6. Makers of farm machinery, pesticides, seeds and other 'inputs' invest around 3–11% of their revenue in R&D. Globally, if farmers' innovations were valued at just 0.5% of farming production — worth $4 trillion — that would match formal R&D investment from the private sector.

Some of the best returns can come from helping farmers to assess their own ideas. Until now, such initiatives have been at arm's length from formal science, and almost exclusively in the developing world. Our involvement in a farmer-focused innovation programme in the United Kingdom has convinced us that such participatory R&D could also boost agricultural innovation in rich countries.

Farmer-centred approaches are not new. In villages in Kenya, rice fields in Indonesia and other places out of reach from industrialized agriculture, group learning programmes recognize and support farmers as innovators.

The best known of these is the farmer field school approach, in which groups of farmers meet regularly to learn alongside their neighbours. The UN Food and Agricultural Organization set up the first such school in Indonesia in 1989, aiming to reduce rice farmers' reliance on pesticides by enabling them to observe, identify and actively manage pests' natural enemies.

Since then, at least 10 million smallholder farmers have taken part in field schools across Asia, Africa and Latin America. This year, a meta-analysis7 of 71 projects found that farmers' experiences of these schools vary enormously, with targeted initiatives being more successful than large-scale national programmes. In targeted initiatives, participants gained knowledge, changed practices and consequently netted higher yields and incomes.

Inspired by the approach, a UK programme adapts participatory learning to suit farmers in the industrialized world, who, in many cases, are not short of capital, training or access to knowledge. Piloted in 2012, the Duchy Originals Future Farming Programme is funded by the Prince of Wales's Charitable Foundation, in turn funded by sales of products through the supermarket chain Waitrose. The work is led by two charities, the Soil Association in Bristol (at which T.M. works, and T.B. serves on the programme steering group) and the Organic Research Centre in Newbury. The aim is to help farmers to sharpen their skills as innovators so that they can be more productive with fewer non-renewable inputs — good for the environment and their bottom line.

Groups of 5–15 farmers tackle a problem put forward by a participant and test solutions over up to a year in as many as four workshops on one of their own farms. A facilitator helps to keep meetings on track, and a relevant researcher — crop or animal scientist, agronomist or ecologist — is on hand to advise on experimental design and point out existing studies to avoid redundant work.

So far, 450 UK farmers have piloted 'field labs' for about 20 topics, with results documented publicly online. Their farms range from under a hectare to more than a thousand. Field labs have tested ways to control black grass (a persistent weed that resists herbicides), assessed the economics of keeping hens alive to lay eggs for a second season, and evaluated ways to reduce use of drugs that control liver fluke in sheep.

These field labs do not always provide clear answers because of their small samples and short timescales. Field labs raise scientific standards nonetheless: early evaluation suggests that most farmers who have taken part in field labs are eager to engage with formal research. And some have yielded useful lessons. In one, vegetable growers tested composts that do not include peat (which releases greenhouse gases when mined). In contrast to prevailing views, the farmers deemed these peat-free composts commercially viable. And the agronomists learned how labour savings from easily handled materials can outweigh business benefits of higher germination rates.

Grass-roots R&D projects are cropping up elsewhere in the developed world. A participatory breeding programme sponsored by the European Union (EU) has recruited farmers to develop crops that can be grown more sustainably. Organic and small-scale farmers in Italy and France (and in some developing countries) are testing and selecting varieties of barley, beans, broccoli, maize (corn), tomato and wheat. 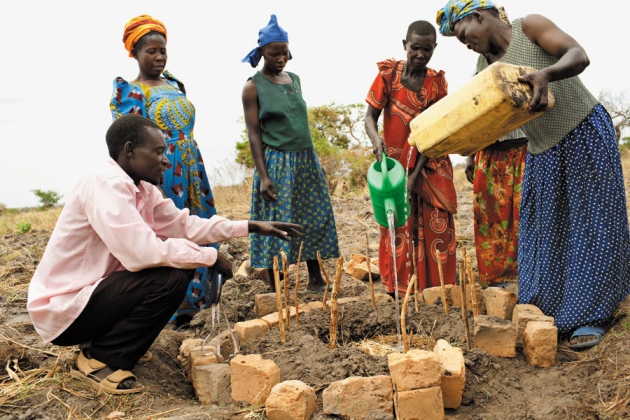 Participants in a farmer field school in Uganda learn about manure.

Animal scientists in Denmark adapted the farmer field school approach to develop 'stable schools'. Four groups of around five farms each worked together to assess changes to herds' housing, hygiene and milking practices and reduced use of antibiotics8. A study funded by the European Commission is evaluating 17 'learning and innovation networks' for sustainable agriculture.

Apps, software and websites that recognize farmers as innovators, not just managers, are also on the rise. In the United States, FarmHack.net is an open-source community in which mainly small-scale farmers share know-how, tools and designs. Recent posts include advice on affordable aerial imaging and guides for repurposing old equipment.

More lessons are coming from the developing world. CABI, an intergovernmental agency, is training community 'plant doctors' who help farmers to identify pests and diseases and to enter the information in open-access databases that could be used to control pests or track epidemics.

Research funders are waking up to the advantages of asking farmers what they need to know. In the United Kingdom, the main farming bodies convened a consultation called Feeding the Future that identified topics such as precision agriculture and animal-disease management as practical priorities9. But we believe that field labs could boost farmers' productivity by supporting low-cost innovations that fly below the radars of large research institutions. When farmers produce knowledge, they are more likely to adopt new practices, and their insights are more likely to be relevant to local conditions.

Field labs attract innovative farmers — early adopters who can spread best practices. The challenge now is to evaluate and popularize the approach. In Europe, at least, the moment may have arrived. Linked to the latest round of reforms to the Common Agricultural Policy and the Horizon 2020 research programme, the EU launched the European Innovation Partnership for agricultural productivity and sustainability. It aims to promote bottom-up approaches by linking farmers, researchers, businesses and other stakeholders into groups charged with finding solutions to shared problems. With billions of euros earmarked for food and farming research over the next six years, the impact of this initiative is potentially enormous.

The European Commission has set out principles for this approach. Whether it flies or fails depends how EU member states rise to the challenge. For this initiative to succeed, governments must opt to spend a proportion of their rural development funds on supporting grass-roots training and learning by actual farmers — beyond the established partnerships with farmers' suppliers, customers and political representatives. Governments should back brokerage services that help farmers to team up with relevant researchers on their own terms, and enable them to navigate the maze of bureaucracy that will probably stand between them and this invaluable seed investment.

The time has come to decentralize, diversify, and enrich agricultural R&D. Farmers — not scientists, outreach workers or salespeople — are the essential players in any agricultural innovation system. Helping them will put food on the world's tables.