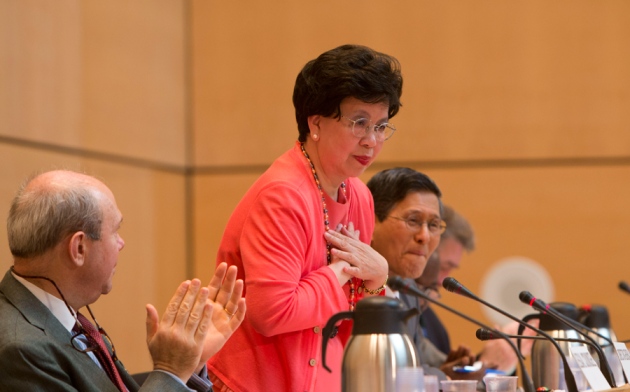 WHO director-general Margaret Chan takes a bow at the end of the World Health Assembly.

Just three years ago, the World Health Organization (WHO) was in deep financial trouble, with a US$300-million deficit. Today the agency’s future looks healthier. Last week, the World Health Assembly — the annual gathering in Geneva, Switzerland, of health ministers of the WHO’s 194 governing member states — voted in favour of major budgetary reforms that look set to put the agency on a firmer financial footing.

The agency has also taken action to prune and prioritize its work, which critics say has long been spread too thinly. Taken together, the budget and streamlining reforms “are clearly an effort, that is visible and tangible, to get their house in order at multiple levels”, says Barry Bloom, a global-health expert at the Harvard School of Public Health in Boston, Massachusetts, and an ardent advocate of WHO reform.

The $3.98-billion budget approved by the assembly for 2014–15 shows zero growth on the WHO’s $3.96-billion budget for 2012–13, and marks a slight decrease when inflation is taken into account. The numbers are in line with a worldwide flatlining of spending on global health after a decade of rapid growth that saw much public-health spending shift to new players (see ‘Peak health’). 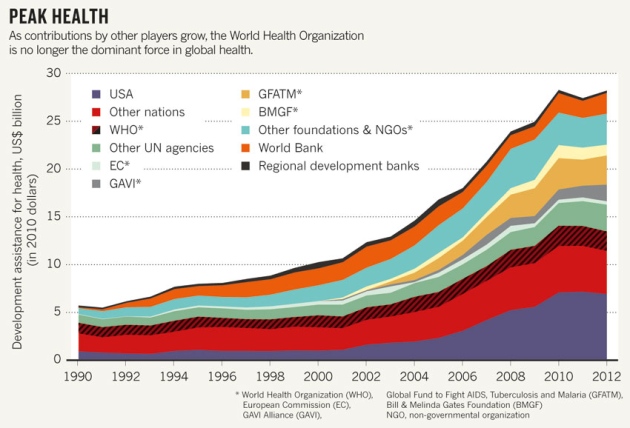 This freeze has forced the agency to make some hard choices. The budget breakdown shows a shift away from infectious diseases — with a $72-million cut, taking expenditure down to $841 million — towards work on non-communicable disorders such as cardiovascular disease and cancer. These received a $54-million increase, to $318 million. The changes correct what experts say has long been an inappropriate skew in the organization’s budget. They also tie in with UN-wide plans for a global push to reduce the burden of non-communicable diseases, in particular by reinforcing health-care systems in poorer countries where these ills are often neglected. But with no increase in the budget, cuts in some sectors are inevitable if other sectors are to grow.

In a world facing outbreaks of H7N9 influenza in China and a novel coronavirus in the Middle East — both potential pandemic threats — some public-health experts are concerned by a 51% spending cut for the WHO’s ‘outbreak and crisis response’ — from $469 million to $228 million. Gaudenz Silberschmidt, a senior adviser to WHO director-general Margaret Chan, says that this cut mainly reflects the difficulty of predicting the spending needs for such outbreak-response work. He adds that when crises occur, the WHO will seek emergency funding from member states. “If H7N9 or corona­virus turn nasty, it’s obvious that member-state donors will be ready to give more,” he says.

The WHO is in fact expanding its work to prepare for, and respond to, outbreaks and other global-health threats, adds Silberschmidt. It is shifting towards helping countries to respond for themselves, rather than depending on the WHO as a global fire brigade. A separate budget line devoted to this — ‘preparedness, surveillance and response’ — will increase by 32% to $287 million.

The shift stems from a 2007 agreement by the WHO’s member states to have a legally binding set of rules on handling outbreaks or other public-health threats of potential global significance: the International Health Regulations (IHR). These rules, which are largely a response to weaknesses seen in some countries’ responses to the outbreaks of SARS and H5N1 flu in the early 2000s, oblige countries to put in place a series of measures to enable adequate action when outbreaks occur. The measures include establishing disease-surveillance networks and reporting mechanisms, and installing lab and other core infrastructure.

But a progress report that Chan presented at last week’s assembly shows that few countries have met the June 2012 deadline for implementing the measures. “The IHR will never be effective unless that surveillance and lab infrastructure is in place,” says Adam Kamradt-Scott, a health-policy researcher at the University of Sydney in Australia.

The biggest change in the WHO budget involves details of a new financial architecture. The agency has long been plagued by the fact that it has total control of only a small part of its budget: monies coming from the membership fees of its 194 states. The bulk — 77% — of the 2014–15 budget comes from voluntary contributions from member states and other donors.

Voluntary donations are usually earmarked for pet priorities. As a result, the WHO’s work is pulled in all directions by its donors, often without commensurate funding. Even worse, until now the assembly has approved only the membership-fees component of the budget, whereas the pledged voluntary contributions can vary by as much as 30%, says Silberschmidt, making it difficult to plan.

From now on, the voluntary contributions will be fixed commitments rather than pledges. Another innovation is a rule that allows the WHO to move up to 5% of one budget line to another, providing flexibility in addressing unforeseen needs.

Kamradt-Scott calls the changes “fairly substantial reforms in the WHO’s ability to manage its finances”. They also make it far clearer to the public just how much money the WHO receives and where that money goes.

But although the budget changes are helpful, they do not necessarily overcome the fundamental problem, says Lawrence Gostin, head of the WHO Collaborating Center on Public Health Law and Human Rights at Georgetown University in Washington DC. Too large a piece of the WHO budget pie comes from voluntary contributions, making the agency’s work and policies ultimately reflective of its wealthiest donors, and leaving it scant margin to set its own. “It simply is not sustainable to have wealthy states and foundations control some 80% of WHO’s budget,” Gostin says.