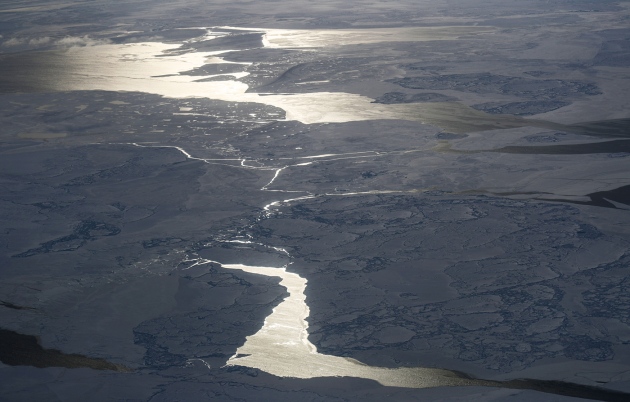 The footprint of Arctic sea ice has shrunk dramatically in the last four decades.

One of the most important continuous records of climate change — nearly four decades of satellite measurements of Arctic and Antarctic sea ice — might soon be interrupted.

Scientists all over the world rely on the sea-ice record compiled by the US National Snow and Ice Data Center (NSIDC) in Boulder, Colorado. But the US military satellites that collect the data, by measuring ice extent using microwave sensors, are approaching the end of their lives. Three are still working but ageing, and their intended successor started experiencing glitches in 2016, before conking out for good this month. The next possible replacement won't launch until at least the early 2020s (see 'Seeing ice').

That means the most complete and most scientifically significant sea-ice record is at risk of breaking. Any gap in satellite coverage is not just a short-term problem: it would compromise future research, because scientists would not be able to accurately compare observations made before the gap with those from afterward.

“Sea ice is the canary in the coal mine, and the canary’s about to fall off its perch,” says David Gallaher, an expert in satellite remote sensing at the NSIDC.

Centre analysts have begun testing the inclusion of sea-ice data from a Japanese satellite, but that spacecraft — designed to last five years — is now five years old. Experts looking to avert the looming gap will gather to debate other options, including the potential use of data from a Chinese satellite, in December, at a meeting of the American Geophysical Union in New Orleans, Louisiana.

Eyes in the sky

In addition to tracking Arctic change, the sea-ice record is also important for climate modellers. Knowing that sea ice formed at a particular location at a particular time gives the air and ocean temperature for that spot, allowing researchers to test simulations of the atmosphere and the ocean.

The data to assess sea-ice coverage come from polar-orbiting satellites carrying passive-microwave sensors that can see through clouds. The sensors detect the brightness of the surface below and translate those measurements into how much ice and water are present.

NASA began taking passive-microwave measurements of sea ice in 1972, using an instrument aboard its Nimbus-5 satellite. That sensor's failure four years later interrupted observations of phenomena such as an Oregon-sized hole that opened in the Antarctic sea ice in successive winters during the mid-1970s. By the time NASA restarted its passive-microwave measurements in 1978, the hole had vanished. 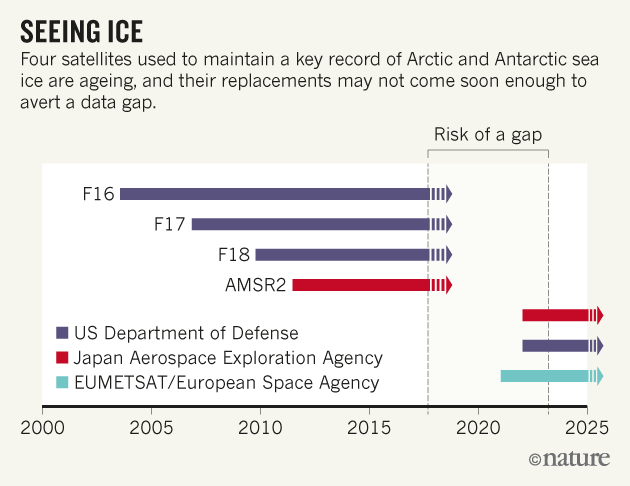 Mysteriously, a large patch of open water appeared in the same region last month — the biggest spotted in four decades. Gallaher says that scientists cannot accurately compare the patch from 2017 to those seen in the 1970s, because the break in the satellite record makes it hard to calibrate Nimbus-5 observations against later ones.

“That’s why it's so critical that you have overlap” from one sea-ice satellite to the next, he says.

NSIDC analysts continued using NASA sea-ice data until 1987, when they switched to information collected by the Defense Meteorological Satellite Program (DMSP). The military uses the microwave information to detect ocean wind speeds to feed into weather models, among other uses, but the data happen to be nearly perfect for sensing sea ice, says Walt Meier, a sea-ice specialist with the NSIDC. The centre has been using DMSP data ever since.

Today, the centre uses data from three DMSP satellites that are more than 8, 11 and 14 years old — and designed to last five. A newer satellite, known as F-19, was launched in 2014 but experienced sensor problems in 2016. It became inoperable this month after tumbling out of control. The final probe in the series, the unlaunched F-20, was dismantled last year after Congress stopped funding the programme.

“Everyone kept saying we got F-20, but then it became obvious 20 wouldn’t go up,” says Gallaher. “The science community was caught kind of flat-footed.”

The US military is developing another set of weather satellites to replace the DMSP series, but the one carrying a microwave sensor will not launch before 2022. That means that when the current three ageing satellites die, the United States will be without a reliable, long-term source of sea-ice data. “Every day it’s more and more risk,” says Meier. “If one of those goes it will get to be nail-biting time, and certainly if two of them go.”

For now, the centre is preparing for those scenarios by incorporating data from Japan’s AMSR2 microwave sensor into its sea-ice record. Another, more politically fraught option is to pull in data from the China Meteorological Administration’s Fengyun satellite series. Their data are already being incorporated into European weather-prediction modelling, and they carry passive-microwave sensors that are appropriate for studying sea ice. Since 2011 Congress has banned NASA scientists from working with Chinese scientists — but not necessarily from using Chinese data.

One final possibility is finding a way to launch the passive-microwave sensor that scientists at the US Naval Research Laboratory salvaged from the dismantled DMSP satellite. The sensor currently sits at the Aerospace Corporation in El Segundo, California, where researchers are trying to find a way to get it into orbit. “It’s a beautiful instrument,” says Donald Boucher, a principal scientist and engineer with Aerospace. “It must fly.”

But the military might ultimately opt to launch the sensor on something such as the International Space Station, which travels over the Earth’s low and middle latitudes. That would fulfil US troops' weather-prediction needs, but would not provide the polar orbit needed to study sea ice. Other planned military or commercial satellites might be able to provide some information about sea-ice cover, but not with the level of detail and continuity that researchers desire.

“It’s kind of frightening that you can have a record as rich and continuous as what this is, and just not a real good way of continuing it,” says Molly Hardman, a remote-sensing specialist at the NSIDC. “It’s depressing.”