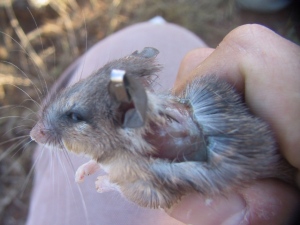 African spiny mice (genus Acomys) can shed up to 60% of the skin on their backs.

Two species of African spiny mouse have been caught at something no other mammal is known to do — completely regenerating damaged tissue1. The work could help improve wound healing in humans.

The species — Acomys kempi and Acomys percivali — have skin that is brittle and easily torn, which helps them to escape predators by jettisoning patches of their skin when caught or bitten. Researchers report today in Nature that whereas normal laboratory mice (Mus musculus) grow scar tissue when their skin is removed, African spiny mice can regrow complete suites of hair follicles, skin, sweat glands, fur and even cartilage.

Tissue regeneration has not been seen in mammals before, but it is common in crustaceans, insects, reptiles and amphibians. Some lizards can regrow only their tails, whereas some salamanders can regenerate entire limbs, complete with bones and muscle.

The researchers say that their next step will be to work out the molecular mechanisms and genetic circuits that direct the regeneration process. It’s unlikely that these mice have evolved an entirely new method of regrowing tissue, says Ashley Seifert, a developmental biologist at the University of Florida in Gainesville, who led the study. Rather, the genes that direct regeneration in salamanders are probably switched off in mammals, but have been switched back on in African spiny mice.

Seifert thinks that the ability to regenerate damaged tissue could even be switched on in humans. “By looking at the common genetic blueprints that exist across vertebrates, we hope to find the ones that we could activate in humans,” he says. “We just need to figure out how to dial the process in mammals back to do something the entire system already knows how to do.”

Jeremy Brockes, who studies limb regeneration in newts at University College London, agrees that it should be possible to use this work to improve wound healing in people. “The genomic resources are so powerful now that one could easily identify some aspect of regeneration in mice that could be helpful for human health,” he says.

The idea of regenerating entire limbs in humans may seem far-fetched, but regenerative medicine has made great advances in the past decade, with lab-grown bladders, stem-cell-seeded wind pipes and other regenerated human organs in part made possible through research on the genetic circuits humans share with flies, salamanders and mice.

Seifert says that this study is also a good example of how combining different fields of biology can lead to interesting results. “My initial conversations with a developmental biologist led me to chat with a mammalogist, eventually bringing me to field work in Africa with an ecologist, followed up by lab work with engineers, completed by molecular work,” he says. “Cross-talk among scientists can lead to really cool things.”