A scramble to buy African land is threatening the continent’s sustainable development, according to reports launched today at the Royal Society in London.

Of the 203 million hectares of land deals reported worldwide between 2000 and 20101, two-thirds were in Africa. The acquisitions are dispossessing millions of Africans of their land, to make way for expansive forestry and mineral projects and plantations, say a series of briefs2 and a report3 published by the Rights and Resources Initiative (RRI), an international coalition of groups working to increase community ownership of forests, based in Washington DC. 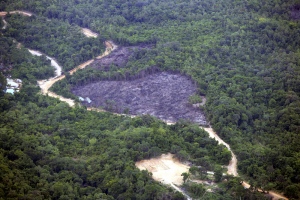 Forests in Liberia and the rest of Africa are being sold to private investors for development.

“The global report shows the scale of the issue as never before: three-quarters of Africa’s population and two-thirds of the landscape are at risk,” says Andy White, who coordinates the RRI.

The land deals stretch across the continent. In Liberia President Ellen Johnson Sirleaf — co-winner of the 2011 Nobel Peace Prize — handed over one-third of the country’s land to private investors during her 2006–11 term. That included around 650,000 hectares granted to two palm-oil giants; the move will affect the land and lives of more than one million Liberians.

And soon after South Sudan gained its independence last year, investors acquired around 9% of the country’s lands, including one-quarter of the most productive land around the capital, says David Deng, research director of the South Sudan Law Society in Juba.

Care in the community

Most of the large-scale acquisitions occur in environmentally sensitive areas, which tend to be maintained by local communities and are owned under traditional customary-tenure law, says Liz Wily, a political economist and author of the RRI's series of briefs2. Such ownership is seldom recognized by governments, so they consider the land easy to sell off, but development can be catastrophic for ecosystems.

“Even though a large investor would prefer to have his thousands or millions of hectares near a port or road, in reality, to get the intact area they want, they are directed to remote, so-called unutilized and unoccupied lands,” she says. “What are they? Forests, rangelands and wetlands. The land rush is very much jeopardizing the existence of these resources.”

In the past, the biggest pressures on locally held natural ecosystems have been agriculture and logging, but large mineral-extraction deals are now catching up. “The footprint of a mine might be small, but the road to the mine will slice and dice rural ecosystems,” says White.

But international efforts at sustainable development are also threatening these areas. Biofuels are made from crops that are often planted on former forest or marsh land, and carbon-offset projects can result in the eviction of inhabitants of wooded areas that are bought up in exchange for carbon credits. Although the official carbon market made little progress in last year’s United Nations Climate Change Conference in Durban, South Africa, the voluntary carbon market is still dispossessing local custodians of their lands.

For example, Green Resources, a forestry company based in Oslo, has bought up hundreds of thousands of hectares of forests in Mozambique, threatening the food security and livelihoods of local populations by denying them access to their traditional lands and food sources4. The company has also expanded to Uganda, Tanzania and southern Sudan. A Dutch firm’s carbon-offset project in Uganda’s Mount Elgon National Park became unmarketable after sustained conflict with local farmers who contest the group's right to the land.

Large-scale acquisitions have increased since global food and oil crises in 2007. Many economists thought that the pressure would ease eventually, but the deals have continued as part of what the RRI report calls a “new world order”3, with business moving to Brazil, Russia, India and China. The growing middle class, especially in Asia, is hungry for food, oil and minerals.

Africa is most at risk because governments fail to acknowledge pre-colonial private ownership of land by villages and communities. Around 98% of forest land in Africa is administered by the government; by contrast, 35% of forests in Asia and 28% in South America are subject to some kind of community tenure3. “Most Africans are permissive tenants of the government, they don’t actually own the land,” explains Wily.

In the 20 years since the first United Nations Conference on Environment and Development was held in Rio de Janeiro, Brazil, natural-resource management reforms have acknowledged that local communities manage forests better than governments or multinational corporations. In the run-up to the this year's United Nations Conference on Sustainable Development, or Rio +20, land-tenure experts are hoping to push policy-makers one step further, ensuring that communities get ownership to and protection for the lands that they manage.

“Rio was about devolution of governance but communities need ownership to protect their resources,” explains Wily. “Rio +20 is about the devolution of ownership.”