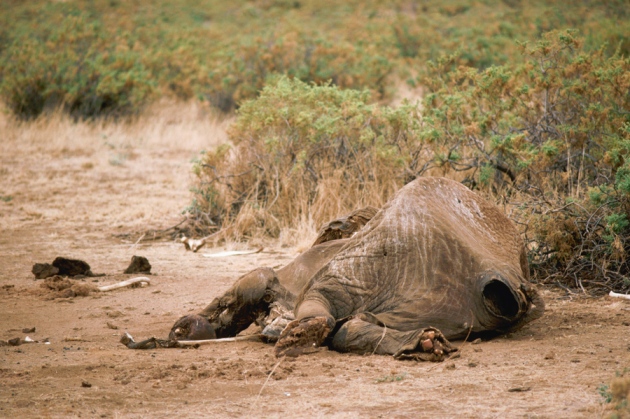 African elephants are killed for their ivory in increasing numbers.

The most comprehensive survey of elephant poaching to date has estimated that 100,000 African elephants were illegally killed between 2010 and 2012. These levels of poaching have driven a decrease of 2-3% of the population across the continent, the authors find, confirming that the ivory trade has reached unsustainable levels.

Determining exactly how many African elephants live in Africa, and how many are being killed by poachers, can be difficult, given the size of the continent and how the quality of monitoring varies from country to country. But reliable estimates are crucial if authorities and scientists are to fully understand the magnitude of the problem.

George Wittemyer, a conservation ecologist at Colorado State University in Fort Collins, and his team examined elephant demographic data and analysed causes of death to obtain evidence-based estimates of local, regional and continental poaching rates — meaning how many out of every 100 living elephants are illegally killed each year.

The study, published in Proceedings of the National Academy of Sciences1, is the first to calculate the level of illegal killing across the continent and study how it affects the species.

The researchers began by looking at wild elephants in Kenya’s Samburu National Reserve, where every birth and death has been recorded since 1998. They used surveys of elephant carcasses to determine whether each death was attributable to natural causes, to poaching or to other causes. They found robust evidence that the rates of illegal killing began to surge in 2009. Moreover, the team showed that the poaching rates were strongly correlated with increases in the local black-market price of ivory, and with the seizures of ivory destined for China.

Next, the team used the Samburu study as a starting point to translate carcass data into illegal-killing rates for 12 populations covered by the Monitoring the Illegal Killing of Elephants (MIKE) programme of the Convention on International Trade in Endangered Species of Wild Flora and Fauna (CITES). Since 2002, MIKE has aimed to quantify the number of elephants killed by poachers through carcass surveys at 45 sites across Africa, but did not possess full data on population levels.

Wittemyer and his colleagues also identified proxy variables that were correlated with killing rates, including Chinese household consumption and expenditure — related to the demand for ivory — as well as an index of local-government corruption, and poverty rates. They used these to further extrapolate their model to 306 elephant populations across Africa.

At the continental scale, the poaching rate was approximately 7% per year from 2010 to 2012, the team calculated. This translates into an average of 33,630 elephants annually, based on current population estimates. Furthermore, the study corroborates earlier work2 suggesting that the total population of elephants in central Africa decreased by almost two-thirds between 2002 and 2012. According to Wittemyer, “what we are seeing is that there are a number of populations that are at really high risk of being wiped out”. Some populations, he adds, could be completely gone in ten years.

“The results of the two [extrapolations] are very consistent, and equally alarming,” says Samuel Wasser, director of the Center for Conservation Biology at the University of Washington in Seattle.

“This is probably the most important publication for elephant conservation in the last ten years and one that we had all waited for with bated breath,” says Fiona Maisels, the adviser for the Wildlife Conservation Society’s wildlife survey and monitoring programmes in Central Africa. She adds that the “proportion of elephants estimated to have been lost annually is highly cautious, but still shockingly high”.

Lee White, executive secretary for Gabon’s National Agency for National Parks in Libreville, agrees that the actual picture in central African forests may be even bleaker than the study suggests. “Much of the data analysis is from sites which are actually national parks or wildlife reserves, and where protection efforts exist, at least nominally.”

Wasser hopes that the alarming numbers described by Wittemyer and his colleagues will help to open people’s eyes about the need to act strategically and fast. “With such a high annual loss rate from poaching, nothing is more vital than targeting law enforcement on major poaching hotspots of Africa.”