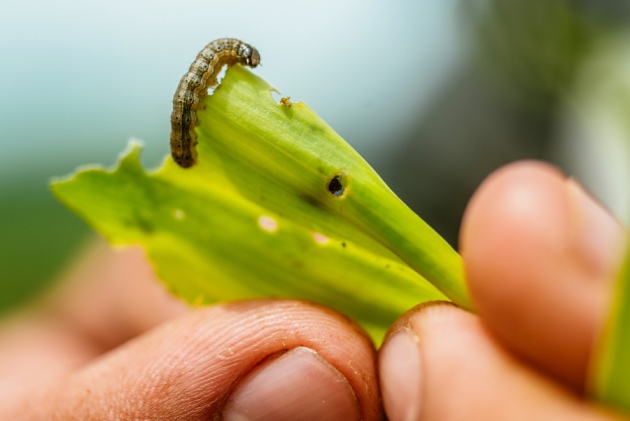 African nations are gearing up to battle an invasive crop pest called the fall armyworm, which has been rapidly spreading across the continent since its arrival there just over a year ago. The caterpillar has wreaked destruction on staple crops including maize (corn), millet and sorghum. Experts warn that Europe and Asia could be next.

Officials gathered for an emergency meeting — organized by the regional Africa office of the Food and Agriculture Organization (FAO) of the United Nations — in Harare, Zimbabwe, earlier this month to coordinate their response. Sixteen countries agreed to urgent plans to boost the region’s capacity to manage crop pests. “The meeting in Harare was basically aimed largely at strengthening preparedness for the countries,” says Joyce Mulila-Mitti, the FAO’s crops officer for southern Africa. Affected countries are assessing their preparedness for other new invasive pests.

Researchers are also launching studies to understand the behaviour of the pest in new environments, as well as its susceptibility to insecticides.

The fall armyworm (Spodoptera frugiperda) originates in Central and South America. It was first identified in West Africa in January 2016, and has since moved to at least 12 countries on the continent, reaching 7 of them in the past 2 months alone.

The pest is the larval form of the fall armyworm moth, and has a voracious and indiscriminate appetite — munching its way through more than 100 different plants, including leafy crops. At least 290,000 hectares of cropland across 4 countries have already been destroyed, officials reported at the Harare meeting. They cautioned that this was an underestimate and the exact figure is probably much higher.

The fall armyworm is a serious problem in the countries where it is endemic. The FAO estimates that Brazil alone spends US$600 million each year to control infestations.

Africa has its own species of armyworm, Spodoptera exempta, which also devours the leaves of maize plants. But the invasive fall armyworm is especially worrisome because it also eats a plant's reproductive parts, eating through the maize cob itself, resulting in even more crop loss.

African scientists are now mobilizing their efforts to study fall armyworm as it moves across different regions. “Although the basic biology of the insect remains similar, confrontation of the pest by different environmental conditions and host plant ranges may cause the pest to react differently,” says Johnnie van den Berg, a zoologist at North-West University in Potchefstroom, South Africa.

Van den Berg and two colleagues will head research on the ecology of the pest in South Africa. This will include studies into the efficacy and management of the fall armyworm on a form of genetically modified (GM) maize called Bt maize. This GM crop is widely grown in the country, and the hope is that it may be more resistant to the pest than conventional maize — as experience in Brazil has demonstrated. The ecology study will examine the fall armyworm’s behaviours on locally grown plants other than maize, and investigate how it fares in South Africa’s dramatically varying climate zones.

The researchers will also study the efficacy of commercially available insecticides that have had to be rushed through an ongoing emergency-registration process to tackle the fall armyworm.

“It is likely that the fall armyworm will spread from its current distribution throughout sub-Saharan Africa fairly rapidly,” warns Ken Wilson, an ecologist at Lancaster University, UK. “From there, it is but a hop, skip and jump to southern Europe.”

Because the caterpillar can live on such a wide variety of plants, it is likely to persist year-round in southern Europe. So it is “not unreasonable” to expect it to migrate through to Eastern Europe and Asia or to be transported there by agricultural export, adds Wilson, who will be working with the University of Zambia in Lusaka to assess the damage caused by the fall armyworm.

Although no one knows how the insect found its way into Africa, increased trade and climate change are the likely culprits, say experts.

The drought linked to the El Niño weather system of 2014–16, followed by the current high rainfall associated with the related La Niña system, created the “perfect conditions” for armyworm outbreaks in Africa, says Wilson.

“With global climate change, we can probably expect more of these fluctuations in temperature and rainfall,” he says. “In addition, with increased global trade and travel, we can expect greater movement of pests within and between continents.” This could be exacerbated by food shortages that stimulate great movement of agricultural produce.

Mulila-Mitti notes that the FAO has observed a rise in the spread of invasive species, particularly in sub-Saharan Africa.

Last year, a team led by ecologist Dean Paini of Australia’s Commonwealth Scientific and Industrial Research Organisation in Canberra analysed 1,300 invasive species, along with countries’ main crops and international trade routes. The study1 found that sub-Saharan African countries were the most vulnerable to invasive species.