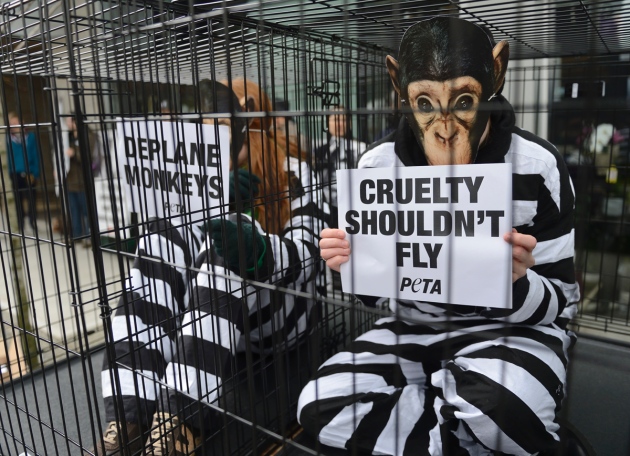 Protesters make their mark at an Animal Transportation Association meeting in Vancouver on 18 March.

Each year, thousands of macaques and other monkeys are flown into Europe and North America to supply academic and industrial research labs — more than 18,000 to the United States in 2011 alone. But in a campaign that could affect scientists across the West, the few major air carriers that still transport non-human primates are coming under unprecedented pressure to halt the practice.

One key route under threat is from China, which last year shipped more than 70% of the research primates sent to the United States (see ‘Up in the air’). On 14 March, animal breeders in China met with officials of China Southern Airlines to implore them to resume flights into Los Angeles International Airport, the largest US port of entry for research primates. Last August, China Southern cancelled a shipment from Guangzhou of 80 crab-eating macaques (Macaca fascicularis) destined for Los Angeles, after a social media, e-mail and telephone campaign by pressure group People for the Ethical Treatment of Animals (PETA), based in Norfolk, Virginia. China Southern has not flown research primates into Los Angeles since then. 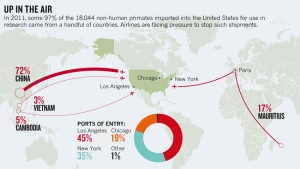 “This was part of our larger campaign to disrupt the flow of primates to US labs,” says Justin Goodman, associate director of the laboratory investigations department at PETA in Washington DC. The group complains that imports are supplementing an already-burgeoning primate population in US labs (see ‘Frequent flyers’).

Two other airlines are also in the public spotlight. Air France faces mounting pressure as the last major European carrier to transport research primates. And Air Canada is petitioning the Canadian Transportation Agency, the body that regulates Canadian air carriers, for the required permission to refuse to transport research primates in the future. With news breaking last week that ferry companies have entirely ceased transporting all research animals — including sophisticated mouse disease models — into the United Kingdom, researchers fear that this is the start of a larger trend.

Michael Hsu, president of animal-breeding company Shared Enterprises in Richlandtown, Pennsylvania, says that activism is affecting companies such as his, which maintains a macaque breeding colony in Shanghai and relies on flights into Los Angeles to get its animals to its clients. China Southern, he says, was easily the biggest carrier serving Los Angeles airport. The other Chinese carriers serving the United States — Air China and China Eastern — have lower capacity, creating a bottleneck for breeders lining up to ship animals. The situation, says Hsu, “is causing a big backlog. It’s costing us money. We’ve been producing these animals for these markets, and if we can’t ship them, it’s very difficult for us to sustain them.” 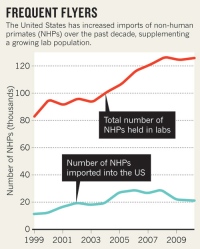 Breeding the animals in the United States instead would be problematic: infrastructure and labour costs are much higher than they are in Asia, and colonies are much more likely to become the targets of animal activists. And moving the animals by sea is a non-starter because of the deleterious effects of the six-week trans-Pacific journey on the animals’ health.

Martin Paré, an associate professor at the Centre for Neuroscience Studies at Queen’s University in Kingston, Ontario, worries not only about his own access to primates, but about a slippery-slope effect. “If Air Canada was permitted to stop transporting non-human primates, what would be next? Stopping all animal transportation for research, which is what’s happening in the UK?”

Many airlines, including Lufthansa, British Airways and Virgin Atlantic, already refuse to carry research primates. In fact, the China Southern shutdown at Los Angeles resulted in part from PETA putting pressure on Lufthansa, which unloads planes for China Southern at the airport. Activists pointed out to Lufthansa that unloading research primates for the Chinese carrier was at odds with its policy on the transport of non-human primates. Within 24 hours, the China Southern macaque shipment was cancelled. Goodman speculates that “Luft­hansa was anticipating a really bad PR situation”. Lufthansa says that it cannot comment on matters involving another carrier.

At the time that it merged with United Airlines in 2010, Continental Airlines was the last remaining US carrier that still transported research primates. United is preparing to publish a policy for the merged airline later this year.

“Nearly every major airline rejects the transport of primates to laboratories,” says Goodman. “The handful that are still doing it are facing more intense opposition and scrutiny than they ever have before. Because it’s not in their best interest to continue doing so, I am sure that they will stop.”

The next several months could prove crucial. After last week’s meeting, China Southern is still deciding whether it will resume transporting research primates through Los Angeles. If Air Canada’s petition to stop shipping primates is successful, Canadian researchers would be inconvenienced, but not entirely cut off — around 1,700 non-human primates were imported from the United States last year, mostly driven across the border. The Public Health Agency of Canada and Queen’s University are challenging the airline’s move, and a decision from the transportation agency is expected later this year.

“The research that Queen’s University performs has significant benefits for the health and welfare of Canadians,” says Steven Liss, the university’s vice-principal for research. He adds that the humane treatment of the animals is “always” the university’s priority. “Air travel is simply the fastest and least stressful way of transporting them.”

Air France issued a statement last September declaring that “nothing allows the airline to decide on the merits of the use of animals in biomedical research”, which it called “important and scientifically justified”. Nonetheless, after it was bombarded with PETA-orchestrated e-mails, phone calls and Facebook postings, the airline cancelled a scheduled 1 February shipment from Mauritius of 60 monkeys bound for a private laboratory in Everett, Washington.

The apparent success of the public campaign has alarmed breeders, importers and biomedical researchers. “It’s unfortunate that some airlines have chosen to capitulate to a small number of individuals with an agenda who aren’t truly representative of the general public,” says Matthew Bailey, vice-president of the National Association for Biomedical Research in Washington DC, a trade organization that lobbies on lab-animal policy for drug firms and research universities.

“More and more scientists will go elsewhere to do primate research.”

Tipu Aziz, a professor of neurosurgery at the University of Oxford, UK, has used macaques to study Parkinson’s disease. He believes that restricting transport of animals will not have the desired effect. “My gut feeling is that more and more scientists will go elsewhere to do primate research,” he says. “I have no qualms about going abroad to do my work. There are quite a few countries that have good facilities: there are centres in India, Singapore, Malaysia, China.”

Others say that the drug industry — a major user of research primates — may also be inclined to relocate activities if the flight barrier becomes insurmountable.

“Let’s say [the activists] get their wish and no animal comes into the United States,” Hsu argues. “Merck is not going to say: ‘Okay, fine.’ They are going to go to other countries where animal care might not be as good, and start doing research there.”

Still, expert observers say that the pressure on the airlines is significant. “The public tide is turning against the use of non-human primates in general, and researchers must either find alternatives or convince the public there is a compelling reason to continue such research,” says Paul Root Wolpe, director of the Center for Ethics at Emory University in Atlanta, Georgia, which is home to the Yerkes National Primate Research Center. If scientists don’t make a louder, more persuasive public case, he says, “more companies — not only in transportation — will choose the side of animal-rights advocates”.

The source details for the graphic ‘Frequent flyers’ should have listed the American Anti-Vivisection Society instead of PETA. This has now been corrected.