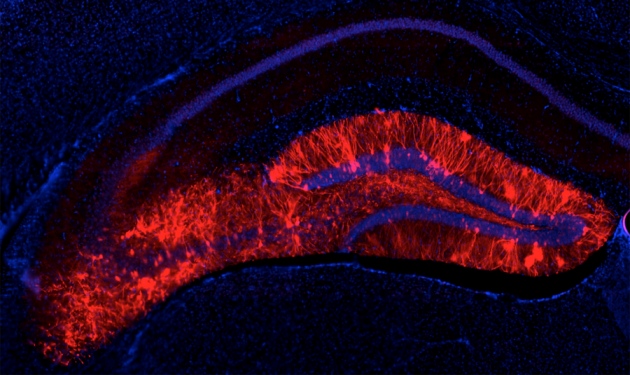 A cross-section of a positive memory: cells glowing red in this mouse hippocampus had fired when a happy memory was encoded.

Boosting activity in neurons that have stored happy memories might help to treat depression — at least according to results in mice.

In a study published today (17 June) in Nature, neuroscientist Susumu Tonegawa and his colleagues at the Massachusetts Institute of Technology in Cambridge report how they reversed a depression-like state in rodents by using light to stimulate clusters of brain cells believed to have stored memories of a positive experience1.

The findings are preliminary, but they hint that areas of the brain involved in storing memories could one day be a target to treat mental disorders in humans, says Tonegawa. “I want to be very careful not to give false expectations to patients. We are doing very basic science,” he adds.

“This is exactly the type of work that psychiatry needs right now,” says Robert Malenka, a neuroscientist at Stanford University in California. “This is an elegant paper.”

From memory to mood

The work has grown out of studies by Tonegawa’s lab and others that aimed to locate the memory ‘engram’ — the physical trace of a memory, thought to be encoded in an ensemble of neurons2–6.

In 2012, Tonegawa and his team provided one of the clearest demonstrations of an engram. They engineered mice with light-sensitive proteins that were expressed when neurons fired. As a result, they could track any neurons that activated while the mice were given a fearful memory by being trained with repeated electric shocks to be scared of a cage3. The researchers later used blue flashes of light to make the same neurons fire again — a technique known as optogenetics — and found that they could make the animals freeze up, presumably because the fearful memory had been reawoken.

More recently, the researchers used variations of the engram method to create false memories in mice4, trigger lost memories5 and even retrain engram cells to encode a positive memory instead of a negative one6.

In the latest work, Tonegawa’s group identified neurons that fired when male mice enjoyed a rewarding experience: spending time with a female mouse. The researchers then restricted the male mice’s movements for ten days. The animals lost their natural preference for sugar water over plain water — suggesting a loss of interest in pleasurable experiences. And stressed-out animals struggled less when lifted by their tails, a symptom commonly interpreted as a lack of motivation.

When the team reactivated the positive engram neurons, these symptoms were reversed within minutes. At first, the researchers saw only short-lived benefits, which seemed to turn on and off with the light stimulation. But they eventually produced persistent effects by pulsing the positive-engram cells with light twice a day for five consecutive days. By the sixth day, the previously stressed-out animals showed improved motivation and pleasure-seeking behaviours even after the light was turned off. “We were able to cure the animals’ depression,” says Tonegawa, although he adds that they do not yet know how long the effect might last.

The effect does not seem to be the result of simply tickling reward and emotion circuits in the brain, Tonegawa says. Stressed-out animals that received five days of real exposure to a female did not show the improvements elicited by brain stimulation.

“I think that’s one of the most intriguing aspects of the study,” says Amit Etkin, a Stanford psychiatry researcher. “There’s something special about the encoding of a positive memory that differs from simply being rewarded."

Tonegawa speculates that the result relates to the observation that some people with depression struggle to recall or enjoy positive experiences. Directly stimulating a happy memory encoded before depression began may have helped the mice to bypass some depression-induced dysfunction in the brain, he says.

But Etkin cautions that any analogies to humans are premature, given the gap between simple animal models of depression and the complex human condition. “Depression in humans is a very heterogeneous clinical state. Some people have problems with motivation and experiencing reward, and other people don’t. One has to be careful about generalizing this to all depression in humans,” he says.

It is also hard to imagine how the neuron-activating techniques used in the mouse study could translate to humans. Optogenetic stimulation is not feasible in people, and deep-brain-stimulating implants, which involve invasive surgery, are used only as a last resort.

Tonegawa emphasizes that his work aims only to explore the circuit dysfunctions that underlie mental disorders. “I hope that these studies of mapping neuronal circuits where boosting activity has a positive effect can provide the logic or potential for developing future therapies,” he says.

This article originally described Robert Malenka as a behavioural scientist; he is a neuroscientist.