The work challenges the belief that fish, unlike organisms with shells or exoskeletons made of calcium carbonate, will be safe as marine CO2 levels rise. 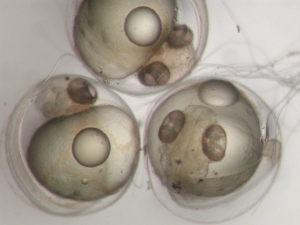 Fish could be most susceptible to carbon dioxide when in the egg, or just hatched.

Oceans act like carbon sponges, drawing CO2 from the atmosphere into the water. As the CO2 mixes with the water, it forms carbonic acid, making the water more acidic. The drop in pH removes calcite and aragonite — carbonate minerals essential for skeleton and shell formation — from the marine environment.

This can mean that corals, algae, shellfish and molluscs have difficulty forming skeletons and shells or that their shells become pitted and dissolve.

At present, atmospheric CO2 levels exceed 380 parts per million and are expected to climb throughout the century to approximately 800 p.p.m. if emissions are not kept in check. And the oceans are expected to continue to sop up the gas, dropping ocean pH by 0.4 units to about 7.7 by 21002.

However, many scientists have suggested that acidification wouldn't be problematic for marine fish because they don’t have exoskeletons and because as adults they possess mechanisms that allow them to tolerate high concentrations of CO2.

But a handful of studies have shown that increased CO2 levels can wreck the sense of smell of orange clown fish larvae and increase the size of the otolith — a bony organ akin to the human inner ear — in white sea bass larvae.

Christopher Gobler, a marine biologist at Stony Brook University in New York, decided to test the effects of rising CO2 levels on the growth and survival of Menidia beryllina, a common schooling fish found in estuaries along the North American coast. He and his colleagues placed the fish embryos into CO2 concentrations comparable to current levels in the seas (about 400 p.p.m.), those expected by mid-century (about 600 p.p.m.) and at levels projected for the end of the century (about 1,000 p.p.m.)1.

The other study2, led by Andrea Frommel, a fisheries biologist at the Leibniz-Institute of Marine Sciences in Kiel, Germany, looked at the effects of acidification on the larvae of Atlantic cod (Gadus morhua) over a two-and-a-half month period. The team reared the fish larvae under three conditions: present day ( about 380 p.p.m.), year 2200 (about 1,800 p.p.m.) and an extreme coastal upwelling scenario (about 4,200 p.p.m), where winds bring large amount of CO2-rich deep water to the surface. As CO2 levels increased, the cod larvae fared less well, developing severe damage to their liver, pancreas, kidney, eye and gut about a month after hatching.

“We’ve always said fish are such good acid–base regulators that they won’t be affected by increasing ocean acidification. But what we found was that the larvae, which haven’t developed these mechanisms yet, are more vulnerable to CO2 than we thought,” says Frommel. The organ damage was serious enough that it could have lowered the cod’s chance of survival, she said.

“These two studies are part of a growing trend that realizes that the broader effects of ocean acidification are much more than just calcification,” says Donald Potts, a coral-reef biologist at the University of California, Santa Cruz.

“If the effects found in these two studies can be generalized to other species of fish, the implications could be very big,” says William Cheung, a marine ecologist at the University of British Columbia’s Fisheries Centre in Vancouver, Canada.