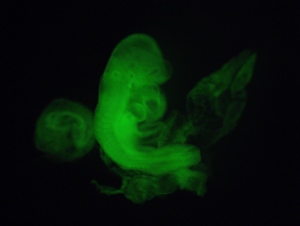 The controversial work involved a mouse embryo injected with cells made pluripotent through stress.

A leading Japanese research centre has opened an investigation into a groundbreaking stem-cell study after concerns were raised about the work's credibility.

The RIKEN Center for Developmental Biology in Kobe announced on Friday that it is looking into alleged irregularities in the work of biologist Haruko Obokata, who is based at the institution. She shot to fame as the lead author of two papers1, 2 published in Nature last month that demonstrated a way to reprogram mature mouse cells into an embryonic state by simply applying stress, such as exposure to acid conditions or physical pressure on cell membranes. The RIKEN investigation follows allegations on blogs about the use of duplicated images in the papers, and numerous failed attempts to replicate Obokata's results.

Cells in an embryonic state can turn into the various types of cell that make up the body. They are therefore ideal for studying the development of disease or the effectiveness of drugs, and could also be transplanted to regenerate failing organs. A consistent and straightforward path to reprogramming mature cells was first demonstrated in 2006, when a study3 showed that the introduction of four genes could switch the cells into embryonic forms known as induced pluripotent stem (iPS) cells. Obokata’s reports that the feat, which the team called stimulus-triggered acquisition of pluripotency (STAP), could be done so simply were met with awe, and a degree of scepticism.

That scepticism deepened last week when blogs including PubPeer started noting what seem to be problems in the two Nature papers and in a paper from 20114, which relates to the potential of stem cells in adult tissues. In the 2011 paper, of which Obokata is first author, a figure showing bars that are meant to prove the presence of a certain stem-cell marker seems to have been inverted and then used to show the presence of a different stem-cell marker. A part of the same image appears in a different figure indicating yet another stem-cell marker. The paper also contains another unrelated apparent duplication.

The corresponding author of that study4, Charles Vacanti, an anaesthesiologist at Harvard Medical School in Boston, Massachusetts, told Nature news that he learned only last week of a “mix up of some panels”. He has already contacted the journal in which the paper was published, Tissue Engineering, to request a correction. “It certainly appears to have been an honest mistake [that] did not affect any of the data, the conclusions or any other component of the paper,” says Vacanti.

Teruhiko Wakayama, a cloning specialist at Yamanashi University in Japan, is a co-author of both papers and took most of the placental images. He agrees that the two pictures look similar but says that it may be a case of simple confusion. Wakayama, who left RIKEN during the preparation of the manuscripts, says that he sent more than 100 images to Obokata and suggests that there was confusion over which to use. He says that he is now looking into the problem.

The scepticism has been inflamed by reports of difficulty reproducing Obokata’s latest results. None of ten prominent stem-cell scientists who responded to a questionnaire from Nature's news team has had success. A blog soliciting reports from scientists in the field reports eight failures. But most of those attempts did not use the same types of cell that Obokata used.

Some researchers do not see a problem yet. Qi Zhou, a cloning specialist at the Institute of Zoology in Beijing, who says most of his mouse cells died after treatment with acid, says that “setting up the system is tricky”. “As an easy experiment in an experienced lab can be extremely difficult to others, I won’t comment on the authenticity of the work only based on the reproducibility of the technique in my lab,” says Zhou.

Jacob Hanna, a stem-cell biologist at the Weizmann Institute of Science in Rehovot, Israel, however, says that “we should all be cautious not to persecute novel findings” but that he is “extremely concerned and sceptical”. He plans to allow about two months to try to reproduce Obokata's results before giving up.

The protocol might just be complicated — even Wakayama has been having trouble reproducing the results. He and a student in his laboratory did replicate the experiment independently before publication, after being well coached by Obokata. But since he moved to Yamanashi, he has had no luck. “It looks like an easy technique — just add acid — but it’s not that easy,” he says.

Wakayama says that his independent success in reproducing Obokata’s results is enough to convince him that the technique works. He also notes that the cells produced by Obokata are the only ones known — aside from those in newly fertilized embryos — to be able to produce, for example, placentas, so could not have been substituted cells. “I did it and found it myself,” he says. “I know the results are absolutely true.”

Several scientists have contacted one or more of the papers’ authors for more details on the protocol, but have not yet received a response. Hongkui Deng, a stem-cell biologist at Peking University in Beijing, was told that “the authors will publish a detailed protocol soon”. Vacanti says that he has had no problem repeating the experiment but that he will let Obokata supply the protocol “to avoid any potential for variation that could lead to confusion”.

Obokata did not respond to enquiries from Nature's news team.

A spokesperson for Nature Publishing Group, which publishes Nature, said: “The matter has been brought to Nature’s attention and we are investigating.”