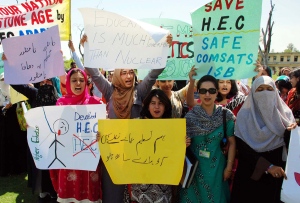 Academics who protested the devolution of Pakistan's Higher Education Commission in April 2011 are again speaking out to protect research funding.

Pakistani universities are grappling with yet another financial crisis after parliament’s approval of a 2012–13 higher-education research budget of 15.8 billion rupees (US$166 million), 10 billion rupees less than the Higher Education Commission (HEC) had asked for.

Coupled with the withholding of another 6.7 billion rupees for research and 4.6 billion rupees for HEC administration from last year’s budget that have still not been released, the higher-education funding cut led to mass protests on 25 June by university professors, researchers and students demanding the immediate release of the withheld funds and condemning the recent “meager allocation” to universities.

On Friday, prime minister Raja Pervaiz Ashraf ordered the finance ministry to release some funds to the HEC, and yesterday 2 billion rupees were provided for administrative expenditures, but not research grants. With 2.6 billion rupees still outstanding from the administrative budget, Javaid Laghari, the chairman of the HEC, says that the commission is unable to pay its employees’ salaries.

The HEC, which governs and distributes funds to Pakistan’s 74 government-funded universities, was set up in 2002, and it brought about revolutionary changes in the country’s higher-education system. University enrolment tripled between 2003 and 2008 and the number of international research publications from Pakistani institutions rocketed from 600 per year to more than 4,300. The HEC’s research funding rose from 270 million rupees in 2002 to 22.5 billion rupees in 2009, but fell to 14 billion rupees last year.

The financial stress has already led to the closure of many research and higher-education projects, including a programme of ‘Core Groups’ to promote life sciences, chemistry and physics. Most of the 175 new projects funded by HEC last year are going at a slow pace or have been halted for want of funds.

“The number of research projects and level of funding for them will have to come down in proportion to the money available,” says Laghari, adding that the country’s scholarship programme for graduate and postgraduate students is the most likely to be affected by the cuts. “Some 3,500 students doing research degrees abroad under government scholarships are worried about their living stipends and fees.”

Iqrar Ahmad Khan, vice-chancellor of the University of Agriculture in Faisalabad, says that the cuts mean the universities don’t have enough money to provide the government’s promised pay rise for university employees.

The main reason behind the low funding for the HEC is a constitutional amendment enacted in 2010 that devolved responsibility for several federal ministries, including the education ministry, to the provinces. The government has tried to devolve the HEC as well, even though it was not under the control of the education ministry. This led to mass protests in April 2011, and Pakistan’s Supreme Court declared the plan unlawful.

Academics say that devolving the HEC to the provinces would undo the recent improvements in higher education, and some believe that the federal government considers the HEC a financial liability, as spending money on an institution that will eventually be devolved to the provinces is an unfruitful investment.

Imtiaz Gilani, vice-chancellor of the University of Engineering and Technology in Peshawar, says: “Funding cuts and the non-provision of promised money shows that the government wants to get rid of higher-education responsibility, but this would badly affect universities and research in Pakistan.”

The government issued a notification on 11 June bringing the HEC under the control of the Ministry of Professional and Technical Education, paving the way for devolution. This move was widely opposed by academics, who fear that it will damage the commission’s autonomy.

Kaleem Ullah, president of the Federation of All Pakistan Universities Academic Staff Association (FAPUASA), which organised the 25 June protests, says that his group will not be satisfied until all withheld funds are released. FAPUASA has threatened to stage continuous protests until the funding issue is resolved.