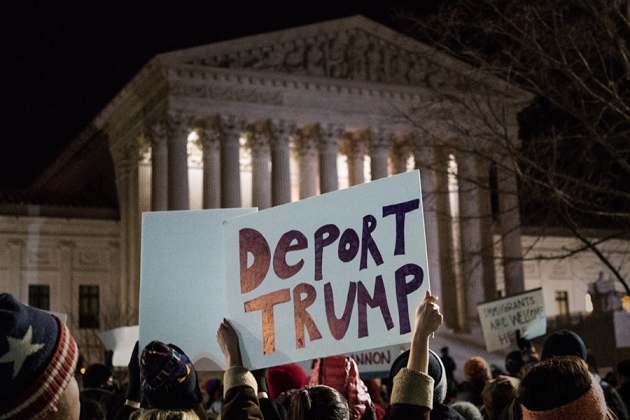 Scientists and postdocs were among the tens of thousands of people hoping to enter the United States who got a bit of good news late last week. A federal judge overturned US President Donald Trump’s week-old executive order banning immigrants and visitors to the United States from seven Muslim-majority countries. These included researchers with valid US visas who were now stuck overseas.

The ‘good news’ sends mixed messages to Yaser Afshar, an Iranian computational scientist working in Germany, who was about to start a job in the United States when the executive order came down. He had a visa approved and just needed to pass an interview to enter the country; he had already cancelled the lease on his flat. The ban upended his arrangements. “I am very sceptical,” Afshar says of the impact of the judge’s decision to overturn the ban. “I am afraid that I will go there and [be] stuck in a situation that will close all the doors to us.”

His attitude is typical among the dozens of affected scientists who have spoken to Nature this week. The Trump administration immediately appealed against the decision, and as Nature went to press on 7 February, another court was preparing to evaluate the case. That court is expected to rule against the ban, but experts say that the situation will not be permanently resolved until it reaches the US Supreme Court.

The uncertainty continues to affect those inside the United States, too. Arsalan Mirjafari, a green-card-holding chemist at Florida Gulf Coast University in Fort Myers, says that — despite assurances from the White House that the travel ban will not apply — his university’s lawyer has advised him not to travel to a conference in Canada in June.

And the ban has already destroyed some researchers’ chances of a life in the United States. Hossein Nabilou and Mahsa Shabani, a couple living in Belgium, both lost positions at Columbia University in New York City that were set to begin on 1 February. They have now begun looking for new jobs in Europe.

As the turmoil continues, scientists and academics have come together to support immigrants and visitors from the affected countries. A letter from 171 scientific societies and institutions condemned the ban, and at least 8 universities have filed legal briefs to support lawsuits against the Trump administration. On a more personal scale, nearly 1,000 scientists outside the country say they have offered to temporarily open their labs to researchers from the United States who are stuck overseas.

Laudable though these efforts are, one well-intentioned response is worrisome: a push for scientists to boycott US-based conferences until all researchers are allowed to attend. Several pledges have cropped up online. “We cannot, in good conscience, continue to enjoy privileges from which our colleagues, students and teachers are arbitrarily excluded,” reads a petition called Science Undivided, which has accrued more than 600 signatures. A petition aimed at all academics has more than 6,000.

The organizers hope that enough boycotts will send a message of solidarity, whether that comes in the form of poorly attended US conferences, meetings moving overseas or international societies choosing to convene in a country that will allow people from any nation to attend.

The clear trade-off, however, is that such a boycott penalizes people from Muslim-majority countries already in the United States, who are now effectively stuck there, and so can attend only domestic meetings.

“The boycott is not intended to close conversation or to withdraw support from American academics,” says Nadine El-Enany, a senior lecturer in law at Birkbeck College, London, who co-organized the larger petition. “It is an attempt to draw necessary attention to the urgency of the ‘Muslim Ban’ and to generate conversation on its far-reaching consequences, not only for those who are nationals from the seven countries but also for many others who are not from these countries but who are nonetheless being detained and harassed at the border.” Till Sawala, who co-founded Science Undivided, says: “We feel that the cost of the ban on science, and on the life of scientists, is so great, that it is absolutely unsustainable. If our initiative can help its abolition, the benefits outweigh the regrettable side effects of international scientists not attending US conferences.”

It’s unclear who will hear this message, and any impact will mostly hit people who oppose the ban anyway. Making a statement is all well and good, but a protest movement that harms only its allies shoots itself in the foot. The boycotts could be much more fiscally devastating to meeting organizers — mainly scientific societies that actively oppose the ban — than to the US government or economy. And a sparsely attended conference is not useful to scientists from any country.

Research also shows that, with few exceptions, such boycotts have mixed success. For example, the academic boycott of South Africa during the 1980s, intended to oppose apartheid, does not seem to have hurt South African businesses or government at all. Instead, it created rifts between South African academics and those in the rest of the world (F. W. Lancaster Perspectives on the Professions 15 (1), 2–4; 1995).

That may be unwelcome news for scientists around the world who are chafing at their political powerlessness and want to make a difference. But there are plenty of positive ways to react. Dennis Hoffman, an economist at Arizona State University in Tempe who studies boycotts, suggests that scientific societies could cover the cost of adding virtual technologies to the conferences remotely, sending a message of inclusion by allowing banned scientists to attend.

Scientists can also lobby the government to grant researchers from the banned countries waivers to allow them entry to the United States in the national interest; these are explicitly allowed by the immigration ban. A unified front of scientists could also follow the example of a group of about 100 tech companies and others, including Microsoft and Google, which has filed a legal brief to back the numerous lawsuits against the administration’s actions.

However researchers fight the unfair policies of the Trump administration, they must avoid knee-jerk reactions. Despite what critics may say, carefully evaluating different courses of action before acting is not being passive, it is being effective.

This article wrongly attributed to Till Sawala and then to Nadine El-Enany the opinion that the proposed boycott of US-based conferences is intended to demonstrate against a ban that hurts everyone. The article also misquoted Nadine El-Enany (originally incorrectly attributed to Sawala) as saying a petition she co-organized aimed to stop more countries being added to the blacklist. In fact, El-Enany had referred to concerns about people who are not from the seven Muslim-majority countries stipulated in the travel ban, but who are nevertheless facing detention and harassment at the border. Sawala had referred to the unsustainable cost of the ban on science and on the life of scientists. The article has now been updated to reflect Sawala and El-Enany’s positions.

An earlier version of this Editorial erroneously attributed to Till Sawala the opinion that the intention of the boycott is to demonstrate against a ban that hurts everyone. In fact, this sentiment came from Nadine El-Enany, co-organizer of the petition aimed at all academics.

The text has been amended to more accurately reflect Sawala’s position.