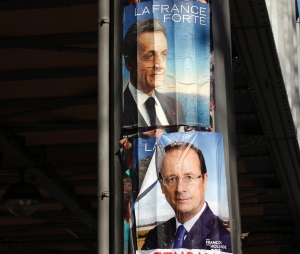 French scientists will have the chance to give their verdict on the root-and-branch reforms to the country’s science system on 22 April, when they vote in the first round of France’s presidential elections. Polls predict a defeat for Nicolas Sarkozy, the incumbent president and candidate for the right-wing UMP party. That result would cheer those researchers who argue that Sarkozy’s sweeping reforms, often imposed with little consultation, have left some institutions sidelined and many labs lacking funds. Others, however, support many of his research reforms, including his move to give universities more autonomy, and fear that the programme could stall if he loses power.

Sarkozy’s main rival, the Socialist Party’s François Hollande, has consistently led in the polls and is predicted to win the second and final round on 6 May by a large margin. If he does, he will be the first socialist to take the Élysée Palace since François Mitterrand was re-elected in 1988. Hollande says that he will maintain the thrust of many of the major reforms begun by Sarkozy, but will ensure greater consultation with the research community as he takes them forward. He also promises to create many more science jobs, in particular for young researchers. Although none of the other eight candidates in the first round is likely to win, horse-trading for the transfer of votes in the second round could influence the policies of the eventual victor.

Nature asked the two leading candidates, Nicolas Sarkozy and François Hollande, about their plans for science. Extracts of their responses appear below. The texts of the full interviews are also available in French and English.

What have been the main accomplishments of your presidency?
Without hesitation, the 2007 law giving universities autonomy from centralized state control. It has given universities greater freedom to set their own strategies, allows them to own their land and buildings, manage their budgets and borrow capital to make major investments. The universities can now recruit scientists without any ministry involvement — even though researchers are civil servants — and they have greater freedom to set salaries, through bonuses, instead of being tied to rigid national salary scales. Since 2007, university funding has also increased by 22%, and in 2008 we launched a €5-billion [US$6.5-billion] plan to refurbish a dozen select university campuses.

Some scientists say that excellence initiatives are creating a two-tier system. How will you maintain research and teaching across France?
Idex, the initiative for excellence funded by €7.7 billion from the €35-billion Investments for the Future programme, is exactly analogous to an initiative launched by Germany several years ago that has seen the emergence of nine institutions destined to become world-class universities. We have similarly selected eight.

There is not that much disparity in opportunities among the universities. They have other opportunities beyond Idex. Ninety per cent of French universities have received some form of support from the Investments for the Future programme. If we want world-class research champions, we need to concentrate resources on those places where the research is best.

I’m a big fan of cycling, and I love watching the Tour de France. We’ve never seen the pack accelerate because those at the rear go faster; the pack accelerates when the leaders accelerate. Similarly, I think the Investments for the Future programme, because it rewards the best, will lift the entire French system of research and higher education, not just the winners.

What is the future for the large national research agencies, such as the CNRS and INSERM?
France is a very special case. Just after the Second World War, we created agencies separate from the universities to do basic research. At the time, such a set-up was found only in Communist countries, in particular the USSR and China. Now, even these countries have abandoned this model. In the United States, the vast majority of research operators are universities. That is not yet the case in France, but it is our goal. The research organizations are expected to become more like real funding agencies, serving the universities and research institutions.

“We need to concentrate resources on those places where the research is best.”

Many leading scientists complain that lab funding by the national research organizations is falling. How would you rectify this situation?
In 2011, research spending as a percentage of gross domestic product reached 2.3%, close to its historical high [of 2.36%] in the early 1990s. The budgets of the main public research agencies — the CNRS, INSERM, CEA, INRA — have risen every year since 2007. The National Research Agency’s budget has stagnated, but the agency is also responsible for allocating €22 billion for higher education and research under the Investments for the Future programme. The best French research teams have enjoyed an unprecedented increase in funding, but these funds have not necessarily passed through the main research agencies.

Scientists say that you have increased bureaucracy in an already-complex research landscape. How would you streamline this?
It is true that new structures have emerged. Many need to be consolidated, and others need to be simplified or reduced. The landscape of French research and higher education is being restructured. It is like a major construction site where, as the project advances, the scaffolding is taken down, the tarpaulin is taken off and the new building appears. That is how it will be for the universities and research in France.

Would you maintain nuclear power’s 75% share of French electricity generation?
I want to intensify research to develop safer nuclear generators, but also boost research and development into alternative energy sources. I want to manage the inevitable transition towards alternative energies that will take place in France. In the meantime, it would be stupid and counterproductive to deprive France of its valuable nuclear-energy assets.

Would you change France’s laws on human embryo and embryonic-stem-cell research?
The issue was widely debated in parliament during the revision of the bioethics laws in 2011. The current situation, in which embryo research is prohibited but there are dispensations for work that could lead to major therapeutic progress and where alternatives are not available, is strictly equivalent from a scientific point of view to what the Socialists propose. During the 2011 debate on bioethics, the French overwhelmingly expressed their commitment to the sanctity of life from its beginning. The national representation therefore ruled that the existing system should be maintained.

French universities have experienced huge changes under President Sarkozy. Would you continue or change his programme?
The 2007 law on university autonomy must be profoundly reformed, but there will be no going back on the principle of autonomy. However, when responsibilities are transferred from the state to the universities, there needs to be a comparable transfer of resources.

I want the university-funding mechanisms to be clarified, and for these not to increase disparities, in particular by cutting back on teaching or the salaries of lecturers and full-time researchers. The reforms will be discussed within a framework law on higher education and research at the end of 2013, preceded this year by a national consultation.

Many leading scientists complain that lab funding by the national research organizations is falling. How would you rectify this situation?
This year and last, the overall funding levels for the national research organizations and the National Research Agency fell. This proves that the President’s words are just smoke and mirrors. I will rebalance core lab funding — the permanent support that lets teams think in the medium and long term — with project funding. I will refocus the National Research Agency [the main source of project funding] on national priorities, emerging themes and interdisciplinary projects. I will order a financial audit of the plans launched by the previous government.

Other countries think French research is being inundated with money. But this new money doesn’t compensate for the cuts observed at the CNRS over the past two years, which has resulted in 25% less cash in the labs. There is a chasm between the €22 billion announced for Investments for the Future and the reality, which is that the funding is only the interest on that endowment distributed over ten years — for every €1 billion announced, the reality is just €34 million per year.

Some scientists say that excellence initiatives are creating a two-tier system. How will you maintain research quality across France?
We need to restore the true sense of the term ‘excellence’. The Investments for the Future programme has worsened disparities between universities. French research is not just Paris, Bordeaux, Toulouse, Aix, Marseilles and Strasbourg. I will not reconsider decisions that have been made but, after the audit, I will demand that unallocated credits be used to correct geographical disparities, to ensure that these do not develop into scientific and university deserts. I will push to replace competition between universities with cooperation.

“The trust between researchers and political leaders has been broken.”

Would you prioritize research spending?
I will make higher education and research a priority, because the major problem facing France is to prepare for the future. I will make youth the core of my programme, giving priority to education from early childhood through to university. I will favour basic research, which has been sacrificed these past few years, paying particular attention to the life sciences, where funding is far below the international average, and environmental sciences.

What will be your policies on nuclear and other energy technologies?
I want France to accomplish an energy transition with the share of nuclear energy being reduced from 75% to 50% of electricity production within 15 years. I will create major research programmes on ‘disruptive’ technologies such as electricity storage, the greening of various production sectors and energy efficiency.

Would you change France’s laws on human embryo and embryonic-stem-cell research?
I will authorize research on embryonic stem cells to clarify the situation of the 2011 law on bioethics, which maintained a ban on this research while allowing dispensations for particular projects. It is important to put an end to this hypocrisy.

How do you assess President Sarkozy’s impact on research and universities?
The President has introduced multiple reforms without providing the necessary resources. In the past decade, we have fallen from 4th to 15th place worldwide in terms of spending on research as a percentage of GDP — 2.26% compared with 2.82% in Germany and 2.9% in the United States. France is trailing, and the trust between researchers and political leaders has been broken. My first objective will be to restore that trust.