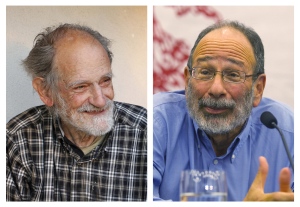 Lloyd Shapley (L) and Alvin Roth have won the 2012 Nobel Prize for economics.

Work that showed how to find optimal matches between people or institutions ‘trading’ in commodities that money can’t buy — such as student places at universities, say, or donated organs — has won the Nobel prize in economics for Lloyd Shapley of the University of California, Los Angeles, and Alvin Roth of Harvard University in Cambridge, Massachusetts.

Their work on matching “has applications everywhere”, says Atila Abdulkadiroglu, an economist at Duke University in Durham, North Carolina. “Shapley's work laid the groundwork, and Roth's work brought the theory to life.”

Publicly funded universities can’t determine which students enrol simply by setting their fees arbitrarily high, because these are capped. And payments for organ donation are generally prohibited on ethical grounds. In such situations, how can one find matches that are stable, in the sense that no one backs out because they feel they could do better?

In the 1960s, Shapley and his colleague David Gale analysed a familiar matchmaking problem — marriage. They asked how ten men and ten women could be matched such that none would see any benefit in breaking the partnership to find a better match.

The answer was to let one group (men or women) choose their preferred partner, and then let those who were rejected by their first choice select their next best choice. This process continued until none of the choosers wished to make another proposal.

Shapley and Gale (who died in 2008) proved that this process will always lead to stable matching. They also found, however, that it works to the advantage of the choosers.

“Without the framework Shapley and Gale introduced, we would not be able to think about these problems in sound theoretical terms,” says Abdulkadiroglu.

But their work was considered little more than a neat academic result until, about 20 years later, Alvin Roth saw that it could be applied to situations in the real world. He found that the US National Resident Matching Program, a clearing house for allocating medical graduates to hospitals, used an algorithm similar to Shapley and Gale’s to prevent problems caused by hospitals' need to offer internships as early as possible — before students knew which area they were going to specialize in.

But Roth discovered that in the United Kingdom, different regions used different algorithms to address this problem, some of which were stable and some not. His work persuaded local health authorities to abandon inefficient, unstable practices.

Roth also helped to tailor matching strategies to specific market conditions — such as the constraint that, as more women graduated, students might often be looking for places as couples. And he showed how to make these schemes immune to manipulation by either party in the transaction.

“He directly employs the theory in real-life problems,” says Abdulkadiroglu. “This is not a trivial task. Life brings in complications and institutional constraints that are difficult to imagine or study within the abstract world of theory.”

David Gale also devised ‘top trading’, a scheme for finding a stable matches when one party is entirely passive - for example, the allocation of student rooms. Here, agents are initially given one object each but can swap them for their preferred choice. Satisfied swappers leave the market, and the others continue the swapping until everything has been allocated. In 1974 Shapley and his colleague Herbert Scarf showed that this process always led to stable solutions. Roth subsequently used the approach to match patients with organ donors.

With economic theory signally failing to bring stability to the world’s financial markets, it is notable that the Nobel committee has chosen to reward work that offers practical solutions for ‘markets’ in which money is of little consequence. The work of Shapley and Roth shows that there is room for economic theory outside the ruthless cut-and-thrust of money markets — and that, perhaps, in that more cooperative world, it can be more effective.