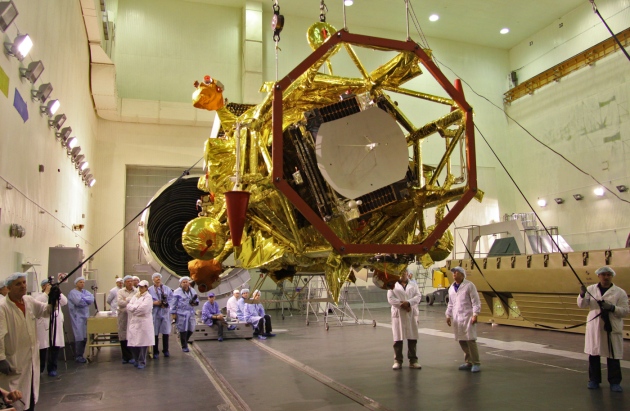 It was the largest planetary mission in the history of space exploration, bearing Russia’s hopes of recapturing Soviet-era glory in Solar System exploration. But instead of rocketing off on a mission to return soil from the Martian moon Phobos, Phobos-Grunt is stuck in Earth orbit. Barring a miraculous restarting of its engines, it will make a fiery fall to Earth, probably by the year’s end.

The Russian planetary programme could plunge along with it. Roscosmos, the Russian space agency, had hoped that a successful robotic surface-sample return — a feat that NASA has not yet achieved — would, in one stroke, erase the demons of past failures. Instead, the agency finds itself exactly where it stood 15 years ago after the launch of the ill-fated Mars 96 mission, a previous massive assault on the red planet: unable to leave Earth orbit. “It was over-ambitious,” says Roald Sagdeev, former head of the Space Research Institute (IKI) in Moscow, who is now at the University of Maryland in College Park. He sees a suite of future planned missions now in jeopardy, as well as chances for international cooperation. “Opponents will say: why should we waste money on planetary missions?”

Engineers at Roscosmos have been trying daily to communicate with the stalled spacecraft, which at 13,500 kilograms is more than twice as massive as the US–European Cassini mission to Saturn, the largest probe sent beyond lunar orbit so far. As Phobos-Grunt (literally Phobos-soil) seems to be undamaged and its fuel tanks full, Roscosmos hoped to reboot the craft, restart its engines and send it on its way to a rendezvous with Mars’ largest moon in early 2013. But all communication attempts have failed, says Alexander Zakharov, the mission’s project scientist at the IKI, which manages the 20 instruments on the scientific payload. The window for getting the spacecraft to Mars — determined by the orbital paths of Earth and Mars — will shut on 21 November. “We have a few days more,” says Zakharov.

After launching on 8 November from Baikonur Cosmodrome in Kazahkstan, the first stage of the Zenit rocket worked perfectly. But amateur skywatchers in South America, who were enlisted by Russia to supplement its meagre tracking resources, didn’t see the expected burn of the second stage, says Ted Molczan, an amateur observer in Toronto, Canada, who runs a satellite-observing group online called SeeSat-L.

A fault in the second-stage control systems seems to be the immediate cause. But journalist Anatoly Zak, the founding editor of russianspaceweb.com, says that the deeper problems are institutional. A culture of lax testing meant that some problems lay undetected, whereas known problems were ignored at the higher levels, he says. “The project was doomed from the beginning.”

Sagdeev adds that the Russian programme’s strength was always in hardware, not control systems and software. “This is the legacy of the Soviet space programme,” he says. “The emphasis was on building rockets.”

Friction with the upper atmosphere is steadily dragging on the orbiting spacecraft, now just over 200 kilometres above Earth at its lowest point. Zakharov says it is expected to fall in mid-December. Molczan, who has performed his own analysis of the orbital decay, says it could be as late as January.

“The project was doomed from the beginning.”

Re-entry could make for a massive fireball, as most of the weight of the spacecraft is in its liquid fuel — much of it meant for a return trip from Mars. A statement on the Roscosmos website says that the craft will blow up in the heat of re-entry, which would reduce the risk of anything reaching the ground. But Jonathan McDowell, an astronomer and satellite watcher at the Harvard-Smithsonian Observatory in Cambridge, Massachusetts, says that it’s also possible that the fuel, made up of hydrazine and dinitrogen tetroxide, will freeze in space during the spacecraft’s initial descent, increasing the chance that some of the craft and its contents might survive the plunge. “Now you have a lump of a couple of tonnes of toxic sludge that’s falling out of the sky,” he says.

Even without the public-relations disaster of a crash to Earth, the damage to Russia’s future planetary plans will be considerable. Zakharov says it will be difficult for Roscosmos to consider repeating the US$163-million Phobos mission. The agency and its primary contractor, Lavochkin, had also wanted to pursue missions to the Moon, Mars, Venus, Mercury and even Europa, the icy moon of Jupiter. But the plans, never firm, are now more uncertain. A 2014 launch of the Luna-Resource mission, a Moon lander paired with an Indian-built orbiter and rover, is still on track, Zakharov says. But after the loss of Phobos-Grunt, which carried a small Chinese satellite (see ‘China forges ahead in space’), India will be rightly concerned, says Sagdeev. “If something similar happens to the Indian payload, it would be a real disaster.”

In the old days, failures could be tolerated, because the Soviet Union would launch mission after mission until each problem was fixed, says Louis Friedman, former director of the Planetary Society in Pasadena, California, and principal investigator of a small astrobiology experiment on Phobos-Grunt. But with no money for frequent launches, Roscosmos and Lavochkin — which has designed and built all Russia’s interplanetary missions since the dawn of the space age — will have to change their cultures, Friedman says. “The hope is that there will be a real shake-up,” he says. “Do I think that will happen? History says it won’t.”