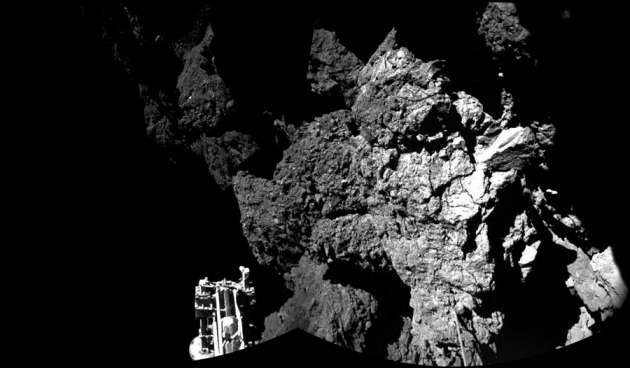 The European Space Agency’s Philae probe successfully landed on 67P/Churyumov–Gerasimenko, sending back the first ever image from a comet’s surface.

“I get goose bumps talking about this image,” says Holger Sierks. The photo is of a metallic, robotic leg against the rugged surface of comet 67P/Churyumov–Gerasimenko. For Sierks, principal investigator of the OSIRIS camera on the Rosetta spacecraft, which put the robotic lander on the comet, it is the “image of my life”.

The European Space Agency (ESA) mission made history on 12 November when the three-legged Philae probe landed on Churyumov–Gerasimenko, which is 4 kilometres in diameter, travels at more than 60,000 kilometres per hour and is currently 514 million kilometres from Earth. After a nail-biting three days in which the elation of Philae’s touchdown gave way to fears about its power levels after it ended up at a site almost devoid of sunlight, the lander went into a potentially terminal standby on 15 November, its batteries drained.

But that was not before Philae gave each of its ten instruments a chance to gather and transmit data. Although the plan was for Philae to still be collecting data now, powered by its solar panels, findings from just 64 hours of scientific activity are already changing the way that scientists view comets.

Twice a day, Philae had a contact window of 3–4 hours in which to communicate with mission control through the Rosetta orbiter. That was enough to achieve 90% of what scientists had hoped for, says Monica Grady, a co-investigator on Philae’s chemical analyser, Ptolemy. And for some instruments, the lander’s unplanned bounces across the comet surface — which saw it end up in a shady spot — might actually have spawned data that are more interesting than anticipated. 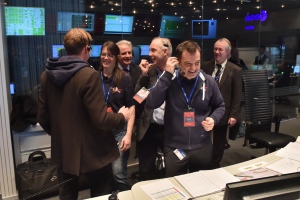 Philae’s dramas began the night before the scheduled landing, with computing problems. A reboot fixed those, and the team decided to go ahead despite a second issue with the lander’s thrusters, which were intended to press Philae into the comet’s surface until it secured itself. But then another mechanism, the harpoons that were intended to securely attach the lander, also failed to fire on touchdown. Even as champagne corks popped at the European Space Operations Centre in Darmstadt, Germany, ESA scientists were unaware that Philae was already rebounding. It bounced twice — once rising as high as 1 kilometre above the comet’s rotating surface — before the weak gravity, under which a craft weighing 100 kilograms on Earth would weigh just 1 gram, eventually brought the lander to rest.

Philae originally hit the flat, sunny region that had been carefully selected as its landing spot, but after the acrobatics, it ended up 1 kilo­metre away on its side, with one leg raised off the surface, in the shadow of a rocky-looking cliff face. From this inelegant position, where it received just 1.5 hours of sunlight in every 12.4-hour comet rotation, it did not have enough power to charge its secondary batteries.

Despite the bumpy landing, Philae’s 64 hours of activity pulled in a haul of good data, which are still being processed. The first panoramic pictures from its CIVA (Comet Nucleus Infrared and Visible Analyser) camera show a surface covered in dust and debris, with rock-like materials in a range of sizes. “It’s certainly rougher than what we thought,” says Stephan Ulamec, Philae project manager at the German Aerospace Center (DLR) near Cologne.

Data from another instrument, MUPUS (Multi-purpose Sensors for Surface and Sub-Surface Science), which includes a Coke-can-sized hammer mechanism atop a 40-centimetre-long rod to probe the comet’s surface, revealed a surprise: the comet seems to have hard ice underneath a 10–20-centimetre layer of dust, into which the hammer could not probe. “We were expecting a softer layer, with a consistency like compact snow, or maybe chalk,” says the DLR’s Tilman Spohn, principal investigator for MUPUS.

Asteroids on the agenda

As their European colleagues put a lander on a comet, US space scientists were thrilled — and a little envious. “It was not perfect, but it was amazing,” says Jessica Sunshine, who studies comets at the University of Maryland in College Park.

Sunshine’s team designed a ‘comet hopper’ that would have used nuclear batteries to jump slowly across a comet’s surface, but NASA declined to fund it in 2012. Now the team is working on an alternative proposal to build on the questions that Philae is starting to raise.

But first, the focus is shifting to asteroids. On 30 November, the Japan Aerospace and Exploration Agency plans to launch its Hayabusa-2 mission to the asteroid 1999 JU3, which will carry, among other things, a Philae-like lander. In September 2016, NASA aims to launch the OSIRIS-REx probe, which will use a robotic arm to vacuum up samples from the asteroid Bennu, for return to Earth.

Rosetta scientists spent several months studying their comet before deciding where they would touch down; the OSIRIS-REx team plans to do the same. “One of the hard things about going to these bodies is that we don’t know what they look like,” says principal investigator Dante Lauretta, of the University of Arizona in Tucson.

Congressman Lamar Smith (Republican, Texas), who heads the House of Representatives committee that oversees science and space issues, notes that Rosetta launched more than a decade ago. “We must make long-term commitments today,” he says, “if we want to ensure successes in space in the future.”

The hardness of this sub-surface will, along with temperature measurements, help scientists to piece together how the comet’s coma of gas and dust forms. But it will have to be reconciled with the low density of the comet, Spohn says. It could be that the ice is porous, or that the hardness is specific to the cold, dark region where Philae came to rest.

Another instrument on the lander, ROMAP (Rosetta Magnetometer and Plasma Monitor), probably benefited from Philae’s two bounces. ROMAP will help to answer whether the comet has its own magnetic field — which could have ramifications for models of planet formation — and how the ionized gas that envelops the comet changes near its surface; the bounces mean extra data points. “If someone designed a mission for magnetometers, and he was a very creative person, he would have done it exactly like that,” says Uli Auster, ROMAP’s co-principal investigator.

Shortly after touchdown, organic molecules were detected in samples of the comet’s surface, courtesy of COSAC, the Cometary Sampling and Composition experiment. It is designed to probe for such molecules and test whether their handedness, or chirality, matches with chemical signatures on Earth. But COSAC had to wait until the final hours of Philae’s battery life before attempting to probe the sub-surface because of fears that the drill action would cause the unanchored lander to tip over. After mission control finally gave the signal to bore down, Philae was able to send back data, which the COSAC team are now scouring for molecules, says co-investigator Uwe Meierhenrich, an analytical chemist at the University of Nice Sophia Antipolis in France.

Low power meant that the Ptolemy instrument, which is designed to analyse chemicals and the relative abundance of isotopes, did not get a chance to study a sub-surface sample. But the team is cautiously optimistic about its surface measurements. If they are lucky, by comparison with data from Earth, both Ptolemy and COSAC could help to reveal whether comets brought substances to Earth that are necessary for life, such as amino acids and water. And like the magnetic measurements, Ptolemy could benefit from Philae’s cross-comet journey. “It’s a possibility that we got samples from at least two, possibly three, landing sites,” says Grady.

More data could yet arrive. Before Philae shut down, the team instructed it to turn about 35 degrees and lift its body by 4 centimetres to bring the craft’s largest solar panel into the light. It could wake up if warming conditions allow it to generate enough power to restart as the comet gets closer to the Sun.

In August, the comet reaches perihelion, its closest point to the Sun, and it will become “active like hell”, says Sierks. The shade that shut down the lander in its first days may become its welcome parasol, says Meierhenrich. “Now it may survive much longer than March. Maybe in April, May or June we might regain contact.”

Rosetta is designed to study Churyumov–Gerasimenko over the coming months as it swings around the Sun and journeys back out into space, and there is now a chance that even Philae will be able to operate then too.

As well as sealing ESA’s place in history, Rosetta’s success could bring greater spoils (see ‘Asteroids on the agenda’). The science programme that funds Rosetta is not up for discussion at ESA’s ministerial meeting on 2 December, but member states might now be more willing to part with cash for discovery projects, says ESA’s senior science adviser, Mark McCaughrean. “In the two weeks before landing, there were concerns that if it didn’t work, that would have damaging effect,” he says. “We would certainly hope it would work the other way around.”