For years, two of the world’s largest research funders — the US National Institutes of Health (NIH) and the Wellcome Trust in the United Kingdom — have issued a steady stream of incentives to coax academics to abide by their open-access policies.

Now they are done with just dangling carrots. Both institutions are bringing out the sticks: cautiously and discreetly cracking down on researchers who do not make their papers publicly available.

Neither agency would name those who have been sanctioned. But the London-based Wellcome Trust says that it has withheld grant payments on 63 occasions in the past year because papers resulting from the funding were not open access. And the NIH, in Bethesda, Maryland, says that it has delayed some continuing grant awards since July 2013 because of non-compliance with open-access policies, although the agency does not know the exact numbers. 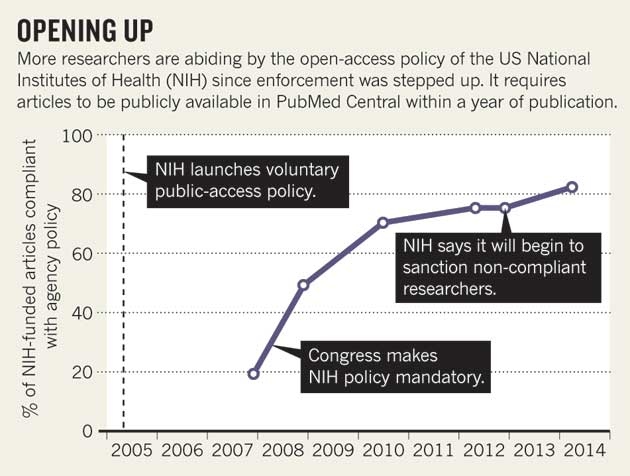 The result, say officials, has been a noticeable jump in researchers following the rules. The NIH’s compliance rate — the percentage of papers placed in the PubMed Central database for public access no later than a year after publication — now stands at 82% (see ‘Opening up’). It had flatlined at around 75% for two years, says Neil Thakur, who oversees policy for the NIH’s Office of Extramural Research. The Wellcome Trust’s compliance rate is 69%, up from 55% in March 2012, says Robert Kiley, head of the trust’s digital services. 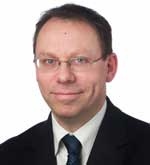 The stricter enforcement by the Wellcome Trust began in June 2012, when its then-head Mark Walport (now the UK government’s chief science adviser) said that it was “simply unacceptable” that almost half of publications resulting from the trust’s funding remained behind paywalls. The trust had mandated since 2006 that the results of work it funded should be made public, yet it had never enforced the policy. In November 2012, the NIH announced a similarly tough line on its own public-access policy; that, too, had never been enforced, despite being a legal requirement since 2008.

The NIH and the Wellcome Trust are the only funders in the world to withhold grants for open-access violations so far. Funders in other nations that have open-access policies — such as Germany, France and Australia — do not generally track their compliance rates. These other agencies may start to mimic the tougher stances of the Wellcome and the NIH, says Peter Suber, director of the Harvard Open Access Project in Cambridge, Massachusetts.

Withholding grants is not the only enforcement tool available to funders. On 31 March, four UK higher-education funders announced that from 2016, only open-access papers posted to online institutional archives will be considered in the Research Excellence Framework — the periodic research audit that grades academic work and guides the distribution of money to UK universities. Because the audit has become an academic obsession (see Nature 502, 288–290; 2013), the policy will be “a game-changer”, says Paul Ayris, director of library services at University College London.

Research institutions can also help with bottom-up policy enforcement, says Bernard Rentier, rector of the University of Liège in Belgium. At Liège, only articles placed in a local repository count towards internal evaluations such as pay rises and promotions. Rentier says that almost 50% of Liège’s publications are now accessible. By contrast, at the Massachusetts Institute of Technology in Cambridge, which has an open-access policy it does not enforce, just 37% of papers published since 2009 are openly available from the local repository.

Without the buy-in of researchers, funding agencies know that no amount of whip-cracking will be enough, says Kiley. Some scientists are not even aware that they could be penalized. Nature’s news team contacted Sheila MacNeil, a tissue engineer at the University of Sheffield, UK, who has published hundreds of articles, including a March 2013 paper on making stem-cell lattices for corneal repair that was funded by the Wellcome Trust (I. Ortega et al. Acta Biomater. 9, 5511–5520; 2013). Nature pointed out that the article should be open access but is not. “This is new to me,” responds MacNeil, who plans to make the paper available. “Agreeing with open access is easy — making it happen, less so,” she says.