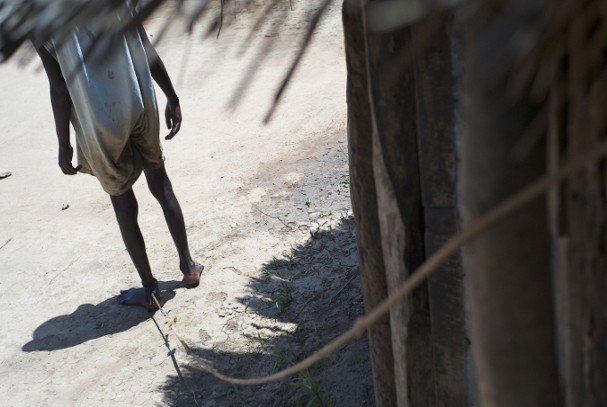 A patient with nodding syndrome is tied to his living quarters in Uganda.

A decade-long collaboration between Ugandan and US researchers has published a landmark paper on a debilitating form of childhood epilepsy.

Since the 1960s, scientists have known about a mysterious form of childhood epilepsy where children in East Africa bob their heads uncontrollably, causing brain damage, stunted growth, and even death. So when large numbers of children in northern Uganda developed nodding syndrome in the 1990s and 2000s, the country’s health ministry sought help from the world-leading United States Centers for Disease Control and Prevention.

CDC scientists travelled to the worst-affected regions of the country in 2009, taking blood samples from children with the disease. A crew of researchers from the CDC and the National Institutes of Health in Bethesda began a multidisciplinary project to look for the cause of the disease. This included parasitologists, immunologists, neurologists and infectious disease specialists from the two agencies.

“We got as far as we have because we all worked together,” says neuroimmunologist, Tory Johnson at the NIH. “It wasn’t just a collaboration between the US and Uganda, but also between the CDC and the NIH, and even within the NIH itself.”

In February — nearly a decade later — the team revealed its most compelling result to date. Writing in Science Translational Medicine, they say a parasite, Onchocerca volvulus, that causes river blindness in the region might be to blame. The paper is coauthored by Ugandan and American scientists, including Jane Aceng, appointed Uganda’s health minister last year.

While previous studies have identified a geographical link between the worm and nodding syndrome, this is the first to explain how the parasite could trigger neurological symptoms, possibly by causing a child’s immune system to turn against their own neurons.

The results add to the collaboration’s previous discoveries, such as the revelation that the seizures are atonic, meaning they are caused by muscles relaxing rather than contracting as in more common epileptic fits. In 2014 a family with affected children from a remote Ugandan village was flown to the NIH to undergo tests unavailable in their home country, such as detailed brain MRIs. The results of this research have yet to be published.

The collaboration between US and Uganda researchers is an example of an African government leveraging the medical expertise and equipment of developed countries to understand and address an emerging disease. A growing concern around the world, especially in sub-Saharan Africa, is that migration and population growth give rise to opportunities for diseases to spread.

Uganda could not have done this research on its own. Despite being a stronger scientific performer than many of its neighbours, Ugandan researchers depend on foreign partnerships. As well as needing access to cutting-edge research equipment — the country is heavily reliant on foreign funding.

Tom Egwang, director-general of Med Biotech Laboratories in Kampala, Uganda’s capital, said major funders from the USA and UK, such as the NIH and Wellcome Trust, encourage collaborative partnerships between African and US or UK- based projects. In some cases, funding requirements stipulate that the principal investigator of the grant must be from the funder’s own country, he says.

This leaves Ugandans with little choice but to collaborate. The US is Uganda’s principal collaborative partner—41% of articles in the Web of Science published by Ugandan authors in 2016-17 had US co-authors. Articles with UK co-authors were second most common (22%), followed by South Africa and Kenya (both more than 10% each).

While Egwang believes Uganda’s strong reliance on partnerships with developed countries is unlikely to change soon, there is some effort to foster intra-African collaboration. Some funding programmes stipulate that projects involve scientists from more than one African country. “Unfortunately, there are not many schemes like this that would ratchet up the percentage of studies with Africa only collaborators,” he said.

Johnson said there is also a growing awareness among western researchers that partnerships with scientists in developing countries need to be mutually beneficial. A young scientist herself, Johnson wants to fund a scientist from Kenya or Uganda to come to the US and study at the NIH. “That’s one of the ways we can build bridges,” she said.