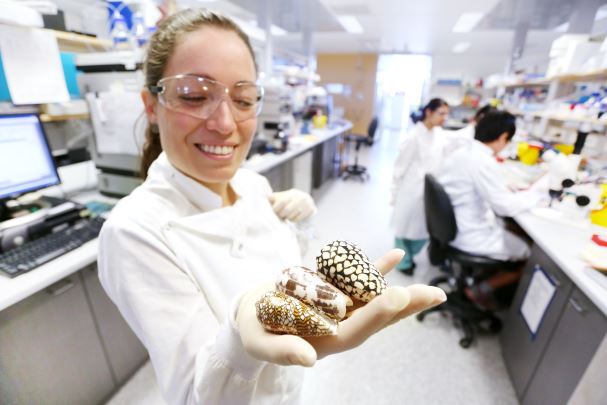 Silmara Rodrigues de Sousa at the UQ Institute for Molecular Bioscience, whose work on cone snails shows they change 'weapons', depending on whether they are hunting or defending themselves.

There is not much separating the top three Australian universities with the highest contributions to the index in 2015, which are ranked by weighted fractional count.

The rise of the University of Queensland (UQ) in the Nature Index, from 4th position in Australia in 2012 to 1st in 2015, can be traced to decisions made in the early 2000s, says the university's president and vice-chancellor, Peter Høj. The then-premier of Queensland, Peter Beattie, invested in building the state's research capacity to diversify the local economy. “UQ was a great beneficiary of this,” Høj says. “That period of investment helped us attract and retain a lot of outstanding younger researchers.”

During the same period, the university enjoyed strong support from American businessman Chuck Feeney's Atlantic Philanthropies group, who was impressed by the can-do attitude of the Australian research sector, and particularly UQ's smart and ambitious leaders. Feeney gave UQ US$65 million.

Both funding sources placed an emphasis on life science research — a notable UQ strength. The university is top-ranked in Australia in the index for life sciences, and comes 65th in the world. It also ranked in the top three universities in the federal government's 2015 Excellence in Research for Australia evaluation system, which rated 95% of the university's research as being above or well above world standard.

Beattie did not invest in research for research's sake, Høj adds. “There was a clear expectation we had to bridge the gap between research and its wider utility.”

The arrangement continues to pay dividends. “We are undoubtedly the most successful Australian university in commercializing our research,” Høj says. Examples include the cervical cancer vaccine, Gardasil, developed from UQ research and launched on to the market in 2006, and an experimental chronic pain drug called EMA401, currently in clinical trials and which was acquired by Swiss pharma firm Novartis in June 2015. “We have a very strong flow of royalties, which we plough back in [to research],” Høj says.

A new research strategy put in place by Monash University in 2010 has since helped elevate it in the Nature Index as well as in other global academic rankings.

One measure of the strategy's success, says Kim Langfield-Smith, the university's vice-provost for academic performance, can be seen in Monash's performance in the ERA. In 2010, 57% of assessed Monash research was graded as above or well above world standard, she says. In the 2015 assessment, that number had jumped to 88%.

Langfield-Smith identifies several aspects of the 2010 strategy that have had particularly significant impacts.

Time and resources were ploughed into attracting excellent researchers. The university also established 'technology research platforms' — key pieces of world-class infrastructure, often part-funded by state or federal grants, that can be used by researchers across the campus as well as by industry. These range from Australia's biggest wind tunnel to a suite of state-of-the-art brain scanners.

The pivotal decision was to invest in the university's own mid-career research staff, Langfield-Smith says.

“A lot of universities have programmes for early-career researchers, and for bringing in star researchers,” she explains. “But we often forget about people in the middle, who can benefit tremendously from specific mentoring and nurturing of their ideas.”

The 'accelerator programme' invited mid-career researchers to submit funding proposals to pursue ideas that would fast-track their own careers as well as benefit Monash.

Examples included establishing international research networks, either by going overseas or bringing people or support to Monash to develop particular skills. “We brought in mentors to help the couple of hundred people selected to achieve their goals,” Langfield-Smith says.

The modest 5% increase by the Australian National University (ANU) in its WFC in 2015 — the only rise among Australia's top six institutions in the index for the year — puts it right on the heels of Monash.

Earth science and physical sciences, particularly astronomy and astrophysics, centred at ANU's Mount Stromlo Observatory, are longstanding areas of strength for ANU, which is the top institution in the index in both categories.

But, it is the jump in its chemistry output that has driven the ANU's overall rise. In 2013, the university's chemistry school moved into a new, purpose-designed building that brought chemistry teaching and research together under one roof.

The chemistry school is undergoing a period of staffing renewal, as a slew of established academics retire and new staff are recruited, bringing their own research interests, says John Carver, the school's director.

“In a couple of years we'll quite a different academic profile,” he says.

Having a thriving cluster of biomedical research centres and companies on its doorstep, the University of Melbourne's research strengths might be expected. The university, which is ranked 4th overall in Australia, continues to score highly in biomedical research, coming second in Australia behind UQ in life science research included in the index.

Malcolm McConville, who heads the university's Bio21 Institute, says having 10,000 biomedical researchers within a few square kilometres, across the university, teaching hospitals and institutes creates a critical mass of capability and expertise. “That is obviously part of the success of the research effort here,” says McConville.

It was to leverage that critical mass that the University of Melbourne established Bio21 11 years ago, and several other research institutes since. “Bio21 was ground-breaking in that the concept was to bring together research groups from different faculties and departments, and apply different approaches to major problems,” McConville says.

From the start, translational research was emphasized, he adds. One example is the work of Ary Hoffmann, who is part of a team testing the infection of dengue- and Zika-carrying mosquitoes with a bacterium that inhibits the insects from passing on these diseases. This research is now undergoing field trials in countries where dengue is endemic, from Colombia to Vietnam.

Established in 1949 as a university of technology, the University of New South Wales (UNSW) retains its traditional strength in physical science research, coming second in that discipline in Australia in the index in 2015.

UNSW has a strong record in forging partnerships with industry, having secured several government 'linkage grants' that pair researchers with industry partners in translational programmes. In the 2016 round, UNSW won large grants spanning the sciences, ranging from a project to explore the function of immune T cells, to developing smart sensors for monitoring water catchment quality.

But, the area in which UNSW is garnering an international reputation is in the potentially transformative technology of quantum computing. Although exotic materials can be used to build basic components of a quantum computer, UNSW is focusing on silicon, which has the inbuilt advantage of being a material the industry is expert in.

This year Australia's prime minister, Malcolm Turnbull, opened a set of laboratories that doubled the university's quantum computer research space. The facilities will house six scanning tunnelling microscopes, which can be used to manipulate individual atoms. These will be used to help build a basic working prototype quantum computer within five years.

The University of Sydney posted solid scores across all areas of research in the 2015 index, but that wasn't enough to stop it slipping to sixth place among Australian institutions. Although little separates the top universities in the index, Sydney's WFC has declined each year since 2012.

However, 2015 also saw a modest 16% rise in its life science score. That improvement could be linked to the university's investment in facilities such as the Charles Perkins Centre (CPC), says Vivienne Reiner, the university's spokeswoman for natural sciences. The $350 million CPC, which opened in June 2014, brings together academics from faculties as diverse as medicine, social sciences and agriculture to look at the multi-faceted causes and consequences of obesity, diabetes and cardiovascular disease.

Similar interdisciplinary centres have been set up to focus on the brain and on nanoscience, and are key to the university's research strategy, adds Duncan Ivison, deputy vice-chancellor for research. “We think the future of research is in the integration of knowledge and disciplines, and of bringing them together in innovative ways,” he says.”

How science in Australia and New Zealand stacks up

Where do universities spend their research money?