10 institutions that dominated science in 2017

These top 10 institutions in the Nature Index were the largest contributors to papers published in 82 leading journals in the past year. 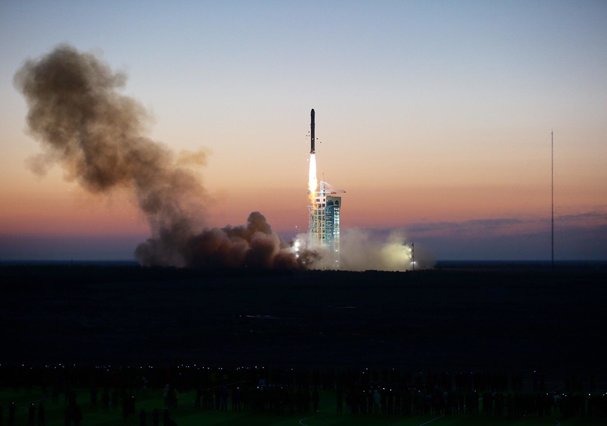 The Dark Matter Particle Explorer takes off at the Jiuquan Satellite Launch Center in China. The Chinese Academy of Sciences satellite was launched in 2015 to search for dark matter.

With around 60,000 scientists working in 114 institutions, the Chinese Academy of Sciences (CAS) in Beijing is the world’s largest research organisation. It is also a significant force in the Nature Index, as the largest contributor to the high-quality research tracked by the index for the third consecutive year. A large proportion of its output is in chemistry, with the Institute of Chemistry placing among the top 15 in the field.

The academy maintains the majority of China’s big science facilities, including the Large Sky Area Multi-Object Fiber Spectroscopic Telescope and the Shanghai Synchrotron Radiation Facility. CAS is also at the forefront of Chinese space science. Since its launch in late 2015, the Dark Matter Particle Explorer satellite has detected around 1.5 billion high-energy cosmic rays, which could be evidence of dark matter.

CAS is also set to play a major role in China’s ‘Belt and Road’ initiative, launched by Chinese President Xi Jinping to stimulate trade, support socio-economic development, and boost science and technology across the region, and Central and Eastern Europe. CAS has committed 200 million yuan (US$32 million) over the next five years for the big-data Digital Belt and Road Programme.

Harvard University, one of the world’s most prestigious institutions, has maintained its position as the leading university in producing high-quality research tracked by the Nature Index for the past three years. Most of this output is in the life sciences, with the Harvard Medical School accounting for more than 80% of Harvard’s papers in the field.

In one widely discussed study, published in Nature in July 2017, Harvard scientists described a method for storing digital data in bacterial genomes. Using CRISPR-Cas9 gene-editing technology, the researchers inserted a digital movie into the DNA of living Escherichia coli and reconstructed the animation by sequencing the bacterial genomes. The new technique could be used to record information inside living cells.

In 2017, Max Planck Society researchers were part of a global effort that pinpointed a supermassive black hole with a mass 800 million times larger than the Sun. Described in Nature, the black hole is the most distant of its kind ever observed and formed just 690 million years after the Big Bang.

Since its formation 100 years ago, the Max Planck Society has established 84 institutes and research facilities, five of which are located outside Germany. Some 74% of the papers of the society’s co-authored papers are produced with partners in another country.

The largest fundamental science agency in Europe, the French National Centre for Scientific Research (CNRS) comprises 10 institutions with almost 32,000 researchers, engineers and technical staff. The government research organisation is the third largest contributor to papers in the physical sciences, with research in this area accounting for 60% of its overall output.

CNRS is especially strong in astrophysics and planetary sciences. In 2017, CNRS researchers published an article in Astronomy & Astrophysics detailing the first measurement of the Sun’s rotating core. The team found that the solar core makes a complete rotation once per week, revealing new insights about the Sun’s evolution and structure.

Located in Silicon Valley, Stanford University is known for its entrepreneurial spirit and cross-disciplinary research. Along with being the birthplace of Google and Yahoo!, Stanford is also a leader in the life sciences.

Almost half of the private university’s published research in the 2018 annual tables was in the life sciences, with the Stanford School of Medicine accounting for 70% of the output. The school has a legacy of scientific breakthroughs, from the first successful human heart and lung transplant, to the development of optogenetics, a method that uses light to genetically alter brain-cell activity.

In 2017, Stanford researchers published a study in Nature describing a new method for treating age-related memory and learning impairments. The team found that a protein in human umbilical cord blood can be used to boost memory and learning functions in elderly mice.

From inflationary theory to the discovery of a cancer gene, the Massachusetts Institute of Technology (MIT) has been at the frontier of research for more than 150 years. Its emphasis on interdisciplinary collaboration and applied science has kept MIT ahead of the game in producing high-quality research that has a real-world impact.

It is the fifth largest producer of papers in the physical sciences in the 2018 annual tables, with the MIT Department of Physics contributing almost half of this output. MIT physicist, Rainer Weiss won the Nobel Prize in physics in 2017, with collaborators Kip S. Thorne and Barry C. Barish at Caltech. The researchers were awarded the prize for their observation of gravitational waves and contributions to the Laser Interferometer Gravitational-Wave Observatory (LIGO) detector.

With 18 research centres and an annual budget of €4.5 billion, the Helmholtz Association of German Research Centres is Germany’s largest scientific organisation. Its mission is “solving the grand challenges of science, society and industry.”

The organisation’s strength in the physical sciences is driven by the German Electron Synchrotron, which operates several particle accelerators. Helmholtz is also a global team player, with 75% of collaborative papers co-authored with researchers at international institutions.

Last year, Helmholtz took part in a large international study that made the first observation of the collision of two neutron stars, published in The Astrophysical Journal Letters. The discovery was made using LIGO, the Europe-based detector Virgo, and around 70 other observatories based on land and in outer space.

8. The University of Tokyo, Japan

The University of Tokyo (UTokyo) has produced many notable alumni, including 17 prime ministers and seven Nobel Prize laureates. The country’s first imperial university has found a place among the top ten institutions for a third year in a row. With almost half of its research contributing to the physical sciences, UTokyo is the third largest producer of papers in this field in the Nature Index.

UTokyo’s Department of Physics is one of the largest in the world and covers almost all frontier areas, from quantum information to astrophysics. In 2017, UTokyo physicists contributed to a discovery by the ATLAS experiment at CERN (European Organization for Nuclear Research). Published in Nature Physics, the study presented the first observation of light being scattered by light, revealing new insights about the properties of matter.

Since Nobel laureate Ernest Lawrence invented the cyclotron particle accelerator at University of California Berkeley (UC Berkeley) in 1930, researchers at the public university have discovered 16 chemical elements of the periodic table. This flair for chemistry remains strong, accounting for almost a third of Berkeley’s contribution to the high-quality research in the Nature Index.

The university is also influential in the life sciences. In 2017, UC Berkeley researchers took a first step towards curing Lou Gehrig’s disease, a rare neurological condition that leads to muscular degeneration. In a paper published in Science Advances, the researchers used CRISPR-Cas9 to disable a mutated gene linked to the disease in mice. The therapy extended the lifespans of the mice and delayed muscle wasting.

With the largest physics department in the United Kingdom, the University of Cambridge is at the forefront of the physical sciences. Close to a third of the university’s scientific output in the 2018 annual tables was in this field. In 2017, Cambridge astronomers published a paper in Astronomy & Astrophysics describing the smallest star ever measured. The star has a gravitational pull 300 times stronger than Earth’s and is roughly the same size as Saturn.

The largest share of output was produced by the renowned Cavendish Laboratory, associated with 29 Nobel prize-winners. Among other notable advances in the lab's 144 year history, researchers there have discovered the electron, artificial nuclear fission, and x-ray crystallography. The university’s strength in physics is set to grow with the UK government investing £75 million in the development of a new laboratory, Cavendish III, aimed at fostering industry and cross-disciplinary collaboration.