Capturing movement on a grand scale. 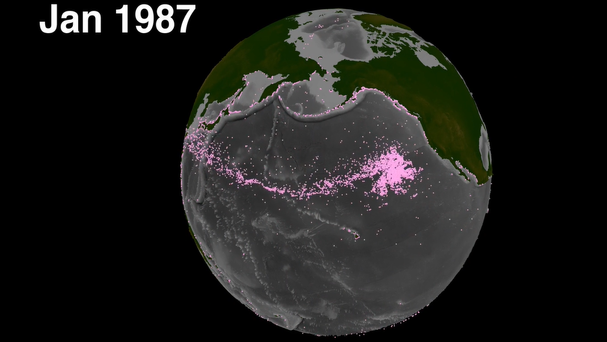 With shifting wind patterns, churning ocean currents and massive bird migrations, the world is constantly on the move.

While these processes play a fundamental role in regulating climate and species survival, it’s impossible to take in the true scale of such movements with the naked eye.

Below are three of the most dynamic data visualizations that capture the movement of various natural phenomena.

Chicago might be known as the windy city, but as this map shows, it doesn’t always live up to its name.

While watching winds blast through the United States on the hour is captivating, the creators note that neither the map nor its data should be used to “fly a plane, sail a boat or fight wildfires.”

Swirling in the waters between California and Hawaii is the world’s largest floating trash pile. Known as the Great Pacific Garbage Patch, this massive gyre has pulled in at least 79 thousand tonnes of plastic debris from countries in Asia, North America and South America.

To grasp the sheer magnitude of the problem, Riley Brady, a PhD candidate in atmospheric and oceanic sciences at the University of Colorado Boulder, created a moving simulation of the 1.6-million-square-kilometre garbage patch over time.

Brady and his colleagues released one million virtual ‘particles’ into the global ocean model.

Over 16 years, a large portion of the scattered debris begins to accumulate in a spiralling mass off the coast of the US, with remaining particles settling along coastlines and small islands.

It’s estimated that 40% of the world’s bird species are on the move, whether it’s to escape winter or to find suitable nesting sites in spring.

In Europe alone, around 2.1 billion songbirds and near-passerine birds migrate from Europe to Africa in autumn.

Just 16 of these species, such as the western yellow wagtail (Motacilla flava) and woodchat shrike (Lanius senator), account for 73% of these long-distance migrations.

But what do these seasonal movements look like from above?

In the 2016 German documentary, Zugvögel (“migratory birds”), GPS tracking data was used to create a striking map of bird flocks migrating from Northern Europe across to Spain, represented as darting neon lines.

These striking animations show the real impacts of climate change