A diabolical beetle and COVID-19 nasal vaccine feature in these stand-out studies. 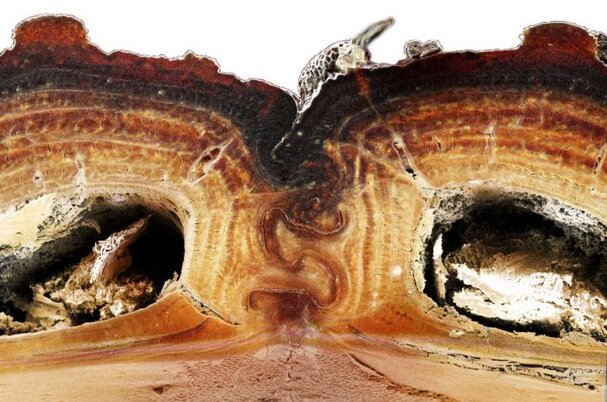 A cross section of the internal structure of the diabolical ironclad beetle showing the 'puzzle piece' configuration that contributes to the insect's remarkable toughness.

October’s most talked-about natural-sciences papers included investigations into the origin of dogs, a beetle’s super-strength, and the phenomena of room-temperature superconductivity and COVID-19 immunity, catching the attention of millions across social media and online news outlets.

Here is an Altmetric ranking of October 2020’s most popular papers in the natural sciences, published in the 82 high-quality journals tracked by the Nature Index.

The question of how post-infection immunity might occur in COVID-19 patients has important implications for how countries will stem the spread of the virus, particularly while vaccinations are out of reach for many.

This study, led by Takuya Sekine from the Center for Infectious Medicine at the Karolinska Institute in Stockholm, examined the SARS-CoV-2-specific memory T cells that could play a role in long-term immune protection against COVID-19.

Sekine and his colleagues analysed the of SARS-CoV-2-specific T cell responses in more than 200 individuals in Sweden who were either unexposed, experienced mild or severe COVID-19 symptoms, or were family members who were exposed to the virus.

In a commentary on the paper published on the Karolinska Institute website, the authors say this means that public immunity is probably higher than antibody tests suggest.

“Our results indicate that roughly twice as many people have developed T-cell immunity compared with those who we can detect antibodies in,” writes co-author Marcus Buggert from the Center for Infectious Medicine at the Karolinska Institute.

The study’s high Altmetric score takes into account its coverage by more than 100 online news outlets. It has reached an audience of almost 27 million people on Twitter.

At a time when research from many fields is being crowded out by COVID-19 papers, it’s a rare paper that can not only rise above the throng, but also attract a significant amount of public attention.

This paper, with co-lead authors Elliot Snider, Nathan Dasenbrock-Gammon, and Raymond McBride from the University of Rochester in New York, addresses a long-standing challenge in experimental physics: achieving room-temperature superconductivity.

The superconductor described in the paper functions at surprisingly mild temperatures lower than 15 degrees Celsius. It’s formed by forcing a compound of carbon, hydrogen, and sulphur between an anvil made of diamonds and exposing it to several hours of laser light.

The key to achieving superconductivity via this setup is the enormous amount of pressure that the material is put under: 2.6 million times atmospheric pressure at sea level.

Study leader Ranga Dias from the University of Rochester told Science News that they were unable to confirm the exact composition of the superconducting material, including its exact arrangement of atoms, which will be the focus of future work.

The paper was covered by almost 100 online news outlets and reached an audience of 7 million on Twitter.

3. “Toughening mechanisms of the elytra of the diabolical ironclad beetle”

This study throws a spotlight on an insect species that can withstand forces that would “jellify a human”, co-author David Kisailus, an engineer at the University of California, Irvine, told Katherine J. Wu at The New York Times.

The aptly named diabolical ironclad beetle (Nosoderma diabolicum) is a flightless species found in arid environments across the western coast of North America. It lives and feeds on fungi that grows under the bark of hardwood and coniferous trees.

The idea for the study came from an encounter between lead author Jesus Rivera, who is an engineer at the University of California, Riverside, and a diabolical ironclad beetle that he ran over with his car – twice. The beetle, though playing dead, was very much alive.

Using advanced microscopy, spectroscopy and in situ mechanical testing, Rivera and his colleagues documented the complex architecture within the beetle’s exoskeleton, and studied the resulting mechanical response and toughening mechanisms when it was exposed to crushing forces up to 39,000 times its body weight.

The internal structures found to work together to protect the insect’s internal organs from being squashed by external forces were formed by a series of interlocking layers that gave strength, flexibility, and buffering. One layer appears to have evolved from the species’ long-obsolete forewings.

The paper has been covered by more than 300 online news outlets to date, including Nature, The Guardian, and Smithsonian Magazine. It reached an audience of 3 million on Twitter, gaining the most public attention in Japan and the US.

It’s widely known that dogs were the first domesticated animal, thought to have originated from wolves that learned to associate with humans. But the origin of prehistoric dogs has remained unclear.

In this paper, Pontus Skoglund, group leader of the Francis Crick Institute’s Ancient Genomics laboratory in London, and his team describe how they sequenced 27 ancient dog genomes from multiple locations where human ancient DNA has been found.

The DNA was extracted from tens of thousands of bones found in archaeological sites in countries including Greece, Iran, Italy, and Turkey.

The researchers conclude that all modern dogs likely came from a single, now-extinct wolf population, but they are yet to uncover their geographical origin.

The paper also found that by 11,000 years ago, at least five major dog lineages had diversified and spread across the northern hemisphere.

"If we look back more than four or five thousand years ago, we can see that Europe was a very diverse place when it came to dogs,” says Anders Bergström, lead author and post-doctoral researcher in the Ancient Genomics laboratory.

“Although the European dogs we see today come in such an extraordinary array of shapes and forms, genetically they derive from only a very narrow subset of the diversity that used to exist."

The study has been covered by more than 100 news outlets to date, the paper reached an audience on Twitter of more than 8 million, according to Altmetric.

Unlike the COVID-19 vaccines that are in the early stages of being rolled out in countries such as the UK and US, the vaccine described in this paper is delivered in one dose via the nose.

Developed by a team of researchers mostly based at the Washington University School of Medicine in St Louis, Missouri, the vaccine has been successfully tested in mouse models. The next step for the team is to test it in non-human primates.

The three most advanced vaccines, from Oxford and AstraZeneca, Pfizer and BioNTech and Moderna, focus on the spike protein of the SARS-CoV-2 virus that causes COVID-19, which is the part of the virus that enables it to enter human cells. By prompting a patient’s cells to make copies of the spike protein, the body can mount an immune response against the virus’s spike proteins, blocking entry into the cell.

Similar to these vaccines, the nasal vaccine described in this paper focuses on SARS-CoV-2 spike proteins. The researchers suggest that the vaccine’s proximity to the nose, which is often the initial site of infection, was part of the reason for its effectiveness in mice. (It should be emphasised that the vast majority of new drugs that have been successfully tested in mice fail in human trials, so it is early days yet for this particular form of a COVID-19 vaccine.)

The paper has been mentioned by more than 150 news outlets and has reached an audience on Twitter of almost 4 million.