This ranking shows which institutions might be punching above their weight in producing high-quality research. 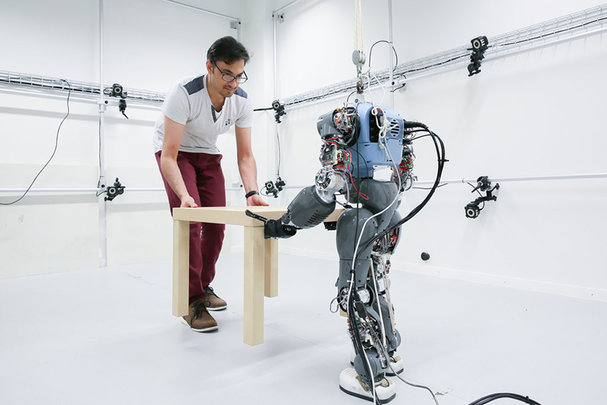 A humanoid at the Swiss Federal Institute of Technology in Lausanne's Biorobotics Laboratory.

But in this normalized top 10, the rankings shift because we consider an institution’s Nature Index output as a proportion of its overall output in the natural sciences, based on article counts in the Dimensions from Digital Science database.

Some of the top 10 have tiny article counts compared to the likes of Harvard University: the Cold Spring Harbor Laboratory is number one, yet comes 347th among academic institutions in our Annual Tables; the 30-year-old Jawaharlal Nehru Centre for Advanced Scientific Research of Bangalore in India is seventh in the normalized ranking and otherwise 422nd. Princeton University is an impressive 10th normalized and 25th otherwise.

Some academic institutions fare much worse than their reputations might predict, and others, much better. As the normalization analysis demonstrates, size isn’t everything, and neither is rank.

Located in the idyllic New York village of Laurel Hollow, the 130-year-old Cold Spring Harbor Laboratory (CSHL) has been the home of eight Nobel Laureates in physiology or medicine.

With an annual research budget of US$120 million and more than 600 researchers specializing in cancer, neuroscience, genomics and quantitative biology, the non-profit CSHL is a hub of breakthroughs. The laboratory’s proudest claims to fame include its roles in the discoveries of the DNA double helix, jumping genes, and the mechanism behind the genetic replication of viruses. CSHL is also where the biology preprint server, bioRxiv, is based.

In early 2018, CSHL researchers uncovered a link between an amino acid and the spread of an aggressive form of breast cancer. In affected mice, they found that limiting the amount of asparagine (commonly found in food) reduced the spread of the disease to other parts of the body, providing evidence that diet might influence the onset of the condition. The Nature paper is among the institution’s most talked-about articles of 2018.

Located in Rehovot, just south of Tel Aviv, the Weizmann Institute of Science (WIS) was established in 1934. With 250 experimental and theoretical research groups across five faculties and US$100 million in research grants for scientific investigations, it’s the home of many discoveries in biology, neuroscience and computing.

In 1955, the institute unveiled WEIZAC, one of the world’s first electronic computers, and in the 1970s, it helped invent the RSA, one of the first public-key cryptosystems now widely used for secure data transmission. Its researchers are also credited with developing drugs for multiple sclerosis and colorectal cancer, and advancing a tool called nuclearmagnetic resonance for the study of biological and non-biological material.

More recently, top papers contributed to by WIS researchers include a measure of the relative biomass of all the animals on Earth (PNAS), and an analysis of just how ‘Earth-like’ the nearby planet known as Proxima b could be (Nature).

3. Institute of Science and Technology Austria

Since opening its doors just ten years ago, the Institute of Science and Technology Austria (IST Austria) has grown to support 700 staff, 142 PhD students and more than 50 research groups.

Located on the outskirts of Vienna, IST Austria’s strength in the life sciences has earned it third place among the top normalized institutions contributing high-quality research to the Nature Index journals.

The absence of departments at the graduate-only university in intended to foster a collaborative culture where life scientists team up with physicists, computer scientists and mathematicians. The Barton Group takes a mathematical approach to solving big questions in evolutionary genetics, from the development of new species to factors that thwart adaptation.

Last year, IST Austria researchers co-authored a paper showing that ants avoid spending time in the nest when infected with a fungal pathogen as a way of preventing the spread of disease. The findings, published in Science, gave new insight into how diseases spread in social networks.

The Institute for Advanced Study (IAS) prides itself on a culture of “unrestricted deep thinking” to change the world. With Albert Einstein among its first professors, the Princeton-based postdoctoral institution specialises in mathematics, natural sciences, history and the social sciences.

Each year, roughly 30 permanent professors recruit and mentor around 200 outside academics to carry out their research on campus. More than half of these come from outside the United States, representing at least 30 different countries.

Researchers at the institute’s School of Natural Sciences explore questions in astrophysics, biology, quantum field theory and mathematical physics. While IAS is an independent institution, the nearby Princeton University and Rutgers University are frequent collaborators.

In 2018, IAS researchers were part of an international team that uncovered new insights about the movements of barbarian communities in 6th century Europe. Published in Nature Communications, the research used genetic, archaeological and historical information to show that the Longobards, a group that ruled Italy for more than 200 years, were more genetically diverse than previously thought.

Founded in 1948 by the American Jewish community in response to the discrimination faced by women, Jews and other ethnic and racial minorities in higher education at the time, Brandeis University counts the likes of Albert Einstein and former First Lady of the United States, Eleanor Roosevelt, as having personally shaped its vision, leadership and structure.

Its star researchers and alumni include mathematician, Karen Uhlenbeck, who won the 2019 Abel Prize – the first woman to do so since its inception in 2003 – and biologists Michael Rosbash and Jeffrey Hall, who cracked the genetic code of circadian rhythms and won a Nobel Prize for it in 2017.

In recent years, the most talked-about papers contributed to by its researchers include a study of a remote Amazonian society, which found that musical preference is cultural rather than hard-wired (Nature 2017), and a 2015 Physical Review Letters paper on the mass of the Higgs boson, which had a record-breaking 5,154 authors.

New York’s Rockefeller University is the oldest biomedical research institute in the US, founded in 1901 by America’s wealthiest man, John D. Rockefeller, 11 years after he founded the University of Chicago.

Its landmark scientific achievements include the discovery of the dendritic cell, the sentinel of the immune system; the development of a chemical agent that can wipe out anthrax bacteria; and the isolation of DNA as the source of heredity information – a breakthrough that changed the course of biological understanding.

This legacy of advancing basic scientific knowledge continues, with Rockefeller researchers contributing to widely discussed papers related to the human circadian rhythm (Cell 2017); key hallmarks of Alzheimer’s disease (Cell Reports 2016); and early embryo development (Nature 2016), the controversial findings of which pointed to the possibility of one day growing human embryos in artificial wombs.

Established just 30 years ago in Bangalore, India, and today with some 53 faculty members and 300 students, the Jawaharlal Nehru Centre for Advanced Scientific Research (JNCASR) is significantly younger and smaller than many of the institutions in the Nature Index Annual Tables.

But this point of difference, along with its location in the ‘Silicon Valley of India’, has become its strength, facilitating the kinds of collaborations that come from close quarters and a fresh approach to interdisciplinary research.

Major studies involving JNCASR researchers in recent years include a Science Translational Medicine paper about spinal cord injuries and a Nature Neuroscience paper with new insights about the brain's hippocampus.

The centre claims a number of high-profile researchers and alumni, such as physicist Rama Govindarajan, oft-noted woman in science and recipient of the 2007 Shanti Swarup Bhatnagar Prize – one of the highest multidisciplinary science awards in India.

Among the world’s leading natural sciences and engineering universities, the Swiss Federal Institute of Technology in Lausanne (École Polytechnique Fédérale de Lausanne, EPFL) was established as a federal institute in 1969 on the shores of Lake Geneva.

In 2018, EPFL researchers made headlines with papers describing a new implanted device that could restore mobility in people with spinal cord injuries (Nature 2018); and diamonds in meteorite fragments that could stem from ‘lost planets’ of our Solar System (Nature Communications 2018).

The Okinawa Institute of Science and Technology Graduate University (OIST) is one of the most diverse institutions in Japan, with half of its faculty coming from other countries. The graduate-only university is among the leading institutions based on its normalized fractional count, with the physical sciences and life sciences being the largest contributors to OIST’s overall output.

Unlike other Japanese institutions, almost all of OIST’s courses and research activities are carried out in English. The university has no departments, instead, researchers from different areas share facilities, equipment and resources. Among the facilities are a sample preparation robot, a solar- and wind-powered house for research on sustainable living, and an advanced lab dedicated to oceanography.

Last year, OIST researchers analyzed the genomes of 60 different varieties of citrus fruits and constructed a new citrus family tree. The findings, published in Nature, revealed that modern citruses can be traced back to an 8-million-year-old ancestor.

Located in New Jersey, Princeton University is the fourth-oldest college in the US. With 26 Nobel Laureates emerging from its programmes, the Ivy League institution is a scientific powerhouse, with the physical sciences accounting for one-third of its overall output.

Princeton comprises nearly 1,300 faculty members, 76% of them tenured professors. With 14 interdisciplinary centres, teamwork is also the backbone of the institution’s approach to research. At the Lewis-Sigler Institute for Integrative Genomics, life-science researchers pair up with biophysicists, computer scientists and statisticians to unravel human and animal genomes.

In 2018, Princeton researchers co-authored a Nature paper that attracted wide discussion online. The study revealed that, for each of the past 25 years, the world's oceans have absorbed an amount of heat energy that is 150 times the energy humans produce as electricity annually – an estimate 60% higher than that of the 2014 Fifth Assessment Report from the United Nations Intergovernmental Panel on Climate Change.

Correction 12 August 2019: The original version of this article used incorrect fractional counts and article counts to derive the rankings, which meant that some institutions were ranked incorrectly. The data and rankings have now been corrected.