Ten institutions that dominated science in 2015 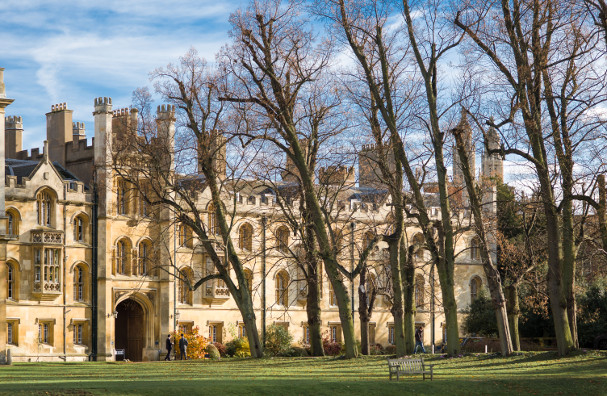 The University of Cambridge made the top 10 institutions in the Nature Index in 2015.

The top 10 institutions in the Nature Index are the largest contributors to papers published in 68 leading journals in 2015.

Established in 1949 in Beijing, the Chinese Academy of Sciences (CAS) is the world’s largest scientific organisation, comprising 114 institutes and 48,500 researchers. In 2015 its scientists made the largest contribution to high-quality research included in the index, a contribution that’s grown by a compound annual growth rate of 6.8% since 2012. Last year, one of the oldest CAS research centres, the Institute of Chemistry, founded in 1956, was also one of the largest contributing departments to the institute’s weighted fractional count. Lei Jiang, from the Institute of Chemistry, says: “Chemistry and materials science are currently strong in China because they were relatively easy subjects to start researching back in the 1980s. They didn’t need expensive equipment. If you look at nanoscience as an example, around half of the top scientists in global nanoscience are Chinese scientists who were educated during this period.”

As the second most prolific institution in the Index, and the most prolific university, Harvard University owes two-thirds of its research output to contributions made in the life sciences. Recognising the growth of interdisciplinary research areas such as translational medicine in the life sciences, Harvard has responded by developing an integrated PhD programme that facilitates cross-disciplinary academic and research collaboration. The Harvard Medical School (HMS), established in 1782, is one of the discipline’s high-fliers. Since the 1930s, fifteen researchers from HMS have shared in nine Nobel Prizes. For the most recent of them, in 2009, Jack Szostak discovered how telomeres cap the ends of chromosomes and protect them from degradation, opening up new lines of enquiry into ageing and cancer research. While last year, a popular piece of research from Harvard’s sleep medicine department highlighted the negative effects of light-emitting e-readers on sleep quality.

The French National Centre for Scientific Research (CNRS) is the largest fundamental research organisation in Europe, comprising ten institutions with more than 32,000 researchers, engineers and technicians. The physical sciences made up more than a third of the contributions to the Index in 2015. In recent years the CNRS has become a key player in planetary science. CNRS engineers have been remotely operating and maintaining instruments on board NASA’s Curiosity Rover, which has been exploring Mars since 2012. The mission lead to the confirmation late last year that liquid water currently flows on the planet. This year CNRS researcher Franck Montmessin is leading the European Space Agency’s mission ExoMars 2016 to investigate the planet’s atmosphere and find evidence of past life beneath its surface.

Ranked fourth in the Nature Index, the Max Planck Society has the physical sciences to thank for its high position. Since 1914, physics researchers at Max Planck, a government-funded association of research institute, have won nine Nobel Prizes. The society is named after the quantum theorist, Max Planck, the institute’s second Nobel recipient in 1918, four years after Max von Laue won for his pioneering work in X-ray crystallography. During the Second World War, Laue’s gold medal was dissolved in acid to prevent discovery by the Nazis, and then recast by the Nobel Society after the war. Today, two institutes stand out in terms of research output in the index: the polymer and solid state research units. Last year, nanochemistry scientists focusing on solid-state research published a paper in Advanced Materials that explored moisture-sensitive technology and its potential use in touchless screens.

When Stanford University opened its doors to students in 1891, it became one of America’s first non-sectarian, co-educational private colleges. Stanford’s first president, David Starr Jordan, said: “Work in applied science is to be carried out side-by-side with the pure sciences and humanities, and to be equally fostered.” This attitude remains true today as research output is equally balanced between all the disciplines. The university is also credited for its entrepreneurial spirit. During the 1950s, the University leased land to a new industrial park that went on to become Silicon Valley. To this day, Stanford researchers continue this legacy of real-world influence. Howard Rose, a Stanford residential fellow and CEO of Deep Stream VR, is currently developing a virtual reality app called Cool! that is designed to immerse patients in a world that enables them to manage chronic pain without drugs.

Last year’s Nobel Prize for Physics went to Takaaki Kajita, the director of the University of Tokyo’s Institute for Cosmic Ray Research. But UTokyo is not resting on its laurels. The university is focused on opening its doors to the outside world by welcoming international collaborations, foreign staff and students, and closer relationships with business. The institute’s latest high-profile research reflects this gearshift. UTokyo’s Graduate School of Frontier Sciences was involved in a decade-long project with four countries to establish the presence of a giant ocean that wraps Saturn’s moon, Encheladus, beneath its crust.

This year marks a hundred years since the Massachusetts Institute of Technology (MIT) moved from Boston to Cambridge in the US. The move ushered in an age of achievement, from the first chemical synthesis of penicillin to building the magnetic core memory that made digital computers possible. The university’s is known for its hands-on approach to teaching and research - students are given a practical-based education in science, technology and related areas of scholarship - appears to be on the money. A 2015 report suggested that 30,000 companies founded by MIT alumni were active as of 2014, employing 4.6 million people and producing annual revenues of $1.9 trillion, equivalent to the world’s 10th largest economy. Eighty-five present and former members of the MIT community have won the Nobel Prize, including nine current faculty members.

The Helmholtz Association of German Research Centres is the country’s largest scientific organisation with almost 38,000 employees and an annual budget of nearly €4 billion. Their research output is dominated by the physical sciences, and last year the Karlsruhe Institute of Technology (KIT) had the biggest impact on the association’s overall ranking in the index. KIT was officially founded in 2009 when the Karlsruhe Research Center and University of Karlsruhe merged. In a recent paper in Nature Photonics, KIT researchers demonstrated a way to store optical information that could dramatically reduce the power consumption and increase the speed of optical communication networks.

Having produced 16 Nobel Laureates in medicine since 1932, the University of Oxford has a long pedigree in the life sciences. More than 30% of contributions to the most recent Nature Index come from this discipline. In the 21st century, the university focuses on a wide range of fascinating aspects of the life sciences from clinical practice in modern medicine to epidemiological and genetic studies. For example, researchers are currently exploring the negative effects of loud noise in an intensive care unit. Another group of scientists whose research is soon to published, have recently sequenced seven genomes of the Brazilian Zika virus taken from seven different individuals infected with the virus to determine when and where it entered the Americas.

A strong showing in the physical sciences has helped put the University of Cambridge in the Nature Index top ten. One of the key contributors to the university’s research output is the Cavendish Laboratory, which is the largest physics department in the UK and birthplace of ground-breaking discoveries such as the structure of DNA, and the splitting the atom. According to Professor Andy Parker, head of the Cavendish Laboratory: “The laboratory’s strength comes from the very wide range of research performed, from cosmology, through solid state and nanoscience, to the physics of medicine, backed up by world-class facilities, and the freedom given to its staff to pursue their own directions. This bottom-up approach to research strategy has proved its worth over many decades.”

How the Nature Index works

Since 2012, every paper published in 68 top-tier journals has been included in the Nature Index database. The index ranks the contribution of research institutions to these articles, by a metric called weighted fractional count (WFC), which divides credit for each article by the affiliations of contributing authors. This measure is weighted to account for the disproportionate number of astronomy articles in the index.