These institutions were the largest contributors to papers published in the past year in the 82 leading journals tracked by the Nature Index. 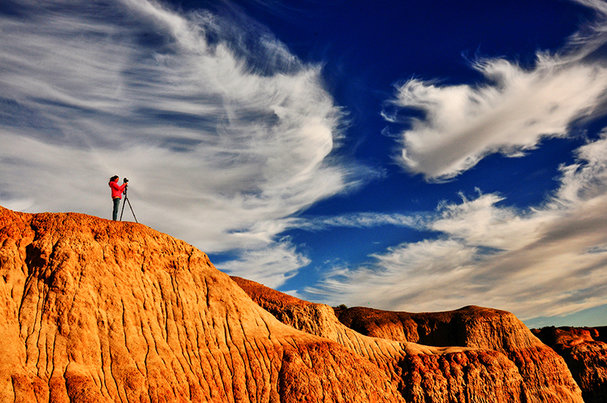 A CAS researcher atop the Yardang landform of Jili Lake in the Xinjiang region of northwestern China.

China’s Peking University has risen up the ranks, making its debut among the leading global institutions in the Nature Index. The university jumped two places in a year, knocking the University of California, Berkeley out of the top 10.

With an astonishing FC of 1,698.14, the Chinese Academy of Sciences (CAS) is the world’s highest ranked research institute by measure of high-quality research output, as tracked by the Nature Index. In 2018, it employed some 60,000 researchers, nearly twice the size of the French National Centre for Scientific Research (CNRS), which employed 33,000 researchers last year.

According to its annual fiscal report, CAS spent 32.23 billion yuan (US$4.6 billion) in science and technology in 2018. It hosts a number of large research facilities, many of them the world's biggest, such as the 500-metre Aperture Spherical Telescope (FAST) in Guizhou Province.

One of the oldest universities in the United States, Harvard has produced many high-profile alumni, including 48 Nobel Laureates, 32 heads of state and 48 Pulitzer Prize winners. Its annual funding for research is US$887 million (2018-2019) and its full-time faculty number 2,280.

The university owes two-thirds of its research output to contributions made in the life sciences, partly attributable to the Harvard Medical School, which counts 15 Nobel Prize winners among its current staff and alumni.

Headquartered in Munich, the Max Planck Society has 84 institutes and more than 23,000 staff, with scientists accounting for 33% of employees. For two consecutive years, the Max Planck Society has maintained its position as the third biggest producer of high-quality research in the Nature Index. The physical sciences and life sciences account for two-thirds of the 100-year-old institution’s output in journals tracked by the Nature Index.

In 2017, Max Planck Society’s annual budget reached US$1.9 billion, most of which was contributed by the federal government. In addition to basic research, it takes credit for more than 4,000 inventions and 120 company spin-offs, including ProteoPlex, which develops protein analysis techniques.

Last year, a Max Planck Society researcher was joint lead author of a paper revealing evidence that the world’s oldest cave paintings were created by Neanderthals, not humans. The Science paper was mentioned by more than 200 news outlets and in more than 1,000 tweets.

Led by computer scientist, Antoine Petit, the French National Center for Scientific Research (Centre National de la Recherche Scientifique, or CNRS) has recently been tasked with coordinating research to assist in the reconstruction of the Notre-Dame cathedral in Paris. That includes modelling, framework and materials assessment, and anthropological studies into how the local population experienced the recent fire and its fallout.

With more than 15,000 researchers, 14,000 engineers, and around 4,000 technicians, CNRS is the only French organization for multidisciplinary research.

Focussing on basic research, the CNRS aims to extend knowledge of natural and social phenomena across a broad spectrum, from cell biology and cognitive science to Roman law and gender stereotypes. It also ranks in the 2019 Nature Index top 10 lists for chemistry, physical sciences, Earth and environmental sciences, and government institutions.

The 33.1-km2 campus located on the San Francisco Peninsula is now one of the largest in the United States, where 2,240 faculty members and more than 16,000 students populate its 18 independent labs, centres and institutes.

Touted as a US$6.5 billion enterprise, Stanford is known for its close ties to Silicon Valley. It ranks as Nature Index’s fifth overall research institution and second academic institution for 2018, and is among the top 10 in the categories of chemistry, physical sciences, life sciences, and Nature and Science .

Founded in 1861 as industrialisation in the United States took hold, MIT now stands as one of the most prestigious higher-education institutions in the world, boasting 90 Nobel laureates, 15 Turing Award winners, and 41 astronauts among its alumni, faculty and researchers.

Its emphasis on interdisciplinary collaboration, applied science, and close ties with industry encourages a strong entrepreneurial culture. A recent MIT report estimated that 30,000 companies founded by its alumni were active as of 2014, employing 4.6 million people and producing annual revenues of $1.9 trillion — equivalent to the world’s tenth largest economy.

“MIT aims to hire gifted and driven faculty and attract the best students, postdocs, and research staff,” says vice-president for research, Maria T. Zuber. “Then, we aim to give each faculty member the freedom to set their research agenda and pursue their passions.”

With more than 40,000 employees and an annual budget of €4.7 billion, the Helmholtz Association of German Research Centres has become the largest scientific organisation in Germany since its founding in 1995. It’s also a powerhouse in the Nature Index, with the physical sciences accounting for more than one-third of its research output.

With more than 800 years of history, the University of Cambridge is one of the world’s oldest higher education institutions, and one of the most prestigious. It appears in Nature Index’s top 10 tables for academic institutions and life sciences for 2018, and ranks eighth overall.

Since its founding in 1209, more than 100 Cambridge affiliates have received a Nobel Prize. It also claims a role in the creation of some 1,500 tech companies, 14 of which have been valued at more than US$1 billion and two at US$10 billion-plus. It has the largest physics department in the UK and is the birthplace of such pioneering work as identification of the structure of DNA and the splitting of the atom.

More recently, its most highly cited researchers include Sir Chris Dobson, author or co-author of nearly 700 papers and review articles, including more than 30 in Nature and Science, which have been cited more than 50,000 times, and Clare Grey, who uses nuclear magnetic resonance to study lithium ion batteries.

The University of Tokyo encompasses three core campuses in Hongo, Komaba and Kashiwa, and accesses ¥258,819 million in funding (approximately US$2.3 billion). It garnered 358,373 paper citations between 2013 and 2017, and also ranks in Nature Index’s top 10 for academic institutions and physical sciences for 2018.

In recent years, the university has placed increasing emphasis on opening its doors to the outside world through international collaborations. Its researcher exchange programme involves more than 15,000 academics, the majority of which are from the United States, but close ties are also maintained with China, South Korea, and other countries in Asia.

Peking University was China’s first public comprehensive university, set up in 1898. Since then, it’s been considered one of the country’s two best universities, alongside Tsinghua University.

Located in the Haidian District of Beijing, it stands near to the Yuanmingyuan Garden and the Summer Palace, a UNESCO World Heritage Site. Its budgets are much more limited than Tsinghua’s: in 2018 and 2019, its overall budget was 12.55 billion yuan (US$1.82 billion) and 19 billion yuan (US$2.75 billion).