The top 10 institutions for chemistry in 2018

These 10 institutions in the Nature Index were the largest contributors to chemistry papers published in 82 leading journals in 2018. 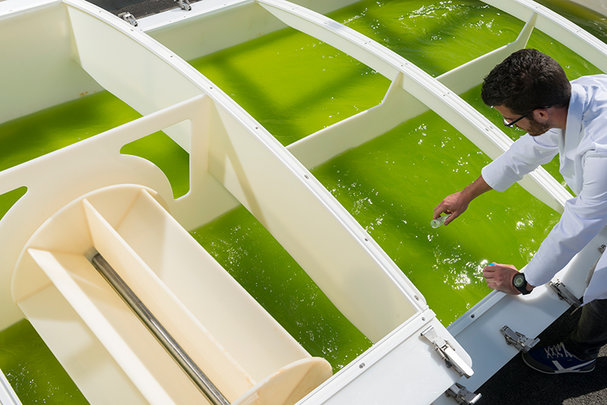 Microalgae cultured in the Raceway Basin of the CNRS to advance the study of biofuels, cosmetics, health and nutrition.

This is the fourth consecutive year in which leading institutions of China, France and Germany have topped the field in high-quality chemistry research output.

The biggest movers in this category for 2018 include Tsingua University in China, which jumped from 17th place in 2015 to sixth place in 2018, and Nanjing University, which climbed six spots from last year to secure the fourth spot for 2018. Kyoto University in Japan dropped out of the top 10 after ranking fourth last year

The Chinese Academy of Sciences (CAS) has retained the world’s top slot in chemistry for the past four years in the Nature Index, and in 2018 had almost four times the FC of the number 2 seed, the French National Centre for Scientific Research (CNRS).

A major point of difference for CAS is its enormous size, encompassing 105 institutes across China, which support more than 60,000 research staff. Of note among its many chemistry-focused institutes are the highly productive Institute of Chemistry (IOC), based in Beijing, and the Dalian Institute of Chemical Physics, which specializes in such areas as catalytic chemistry, chromatography, and pharmaceutical chemistry.

CAS president, Bai Chunli, is a physical chemist and nanoscientist, known for his pioneering work in scanning tunnelling microscopy and nanotechnology.

Based in Paris, the French National Center for Scientific Research (CNRS) is the only French organization for multidisciplinary research. It is also the largest governmental research organization in France, and the largest agency in Europe undertaking basic research.

With an annual budget of €25.5 million (approximately US$28 million), its Institute of Chemistry supports 12,000 staff, including researchers, teacher-researchers, engineers, technicians and administrators, across 133 labs.

Alejandro Franco, who was only 13 when he patented his first hydrogen fuel cell and is now developing advanced simulation systems to improve battery power, is one of its rising stars. So is Raphaël Rodriguez, who was the first French scientist to win the Tetrahedron Young Investigator Award, an international prize for exceptional chemists under the age of 40.

Chemistry is fundamental to the Max Planck Society’s history; its Institute of Chemistry was one of the first established within the German research organization. Its performance in the discipline continues to flourish, earning it third place among the top institutions in the field.

The Max Planck Society’s work ranges from investigating the chemical processes in Earth’s foundations, to understanding how cells communicate. The Max Planck Institute for Chemical Energy Conversion, re-established in 2012, focuses on the storage of energy, such as solar and wind power.

With an incredible surge of 25.6% over the previous year, Nanjing University jumped from tenth position in 2017 to fourth place in 2018, according to its high-quality research output in chemistry, as tracked by the Nature Index.

The university owns China’s oldest chemistry department, launched in 1920 at the National Southeastern University, which later became the National Central University before being renamed again to Nanjing University in 1950.

Its School of Chemistry and Chemical Engineering boasts 101 full professors, including 5 members of the Chinese Academy of Sciences, and runs one of the oldest doctoral chemistry programs in China.

Peking University was China’s first public comprehensive university, set up in 1898. Since then, it’s been considered one of the country’s two best universities, with Tsinghua University.

In 2018, its positions in the chemistry, physical sciences, Earth and environmental sciences, and life sciences categories were 5th, 11th, 10th, and 39th, respectively.

As one of China's most prominent universities, Tsinghua University has made impressive progress in chemistry in recent years. Its ranking climbed to sixth in 2018, up from 17th place in 2015.

Tsinghua’s chemistry research is conducted by the Department of Chemistry, Department of Chemical Engineering and the School of Materials Science and Engineering, and has a strong industry connection. Boosted by significant research funding of the university (15.7 billion yuan in 2019, or US$2.27 billion), which is the highest among all Chinese universities, Tsinghua chemists have excelled in nanomaterial, industrial catalysis and low-carbon technologies.

Key studies in 2018 led by Tsinghua scientists include one describing how calcium-ion batteries could be used for energy storage (Nature Chemistry), and another on an electrocatalyst that could potentially reduce carbon dioxide emissions in industrial production (Journal of the American Chemical Society).

7. University of Science and Technology of China

Established by the Chinese Academy of Sciences (CAS) in 1958 in Beijing, the University of Science and Technology of China was launched to drive the higher education of the country’s top talent in interdisciplinary science and technology. In 1970, it moved to its current location in Hefei, the capital of the Anhui Province.

The institute’s achievements include establishing the first graduate school in China as well as the first class for gifted young people in China and the first ‘big science’ facility in China, the Hefei Synchrotron Radiation Facility. With CAS, it now also jointly operates the Experimental Advanced Superconducting Tokamak and the Steady High Magnetic Field of the High Magnetic Field Laboratory.

As one of the world’s most prestigious higher-education institutions, it’s been at the frontier of research for more than 150 years, fostering an emphasis on entrepreneurship and applied science through close ties with industry.

Its Department of Chemistry dates back to 1865, and is recognized as one of the best places in the world for chemistry research. Known for achievements in polymer synthesis and medical imaging, key focus areas include discovering new chemical syntheses, creating sustainable energy solutions, detecting and curing disease, and developing novel materials.

In late 2018, three of its researchers, Stephen Buchwald, Jeremiah Johnson, and Timothy Swager received American Chemical Society National Awards for 2019. Swager was awarded for “the design, synthesis and study of polymers with innovative molecular designs to create materials with superior sensory, electronic, optoelectronic and mechanical properties.”

Northwestern is the second-fastest rising institute among the top 10 in high-quality chemistry research output for 2018 (Nanjing University was the fastest).

One of the star researchers in its Department of Chemistry is Emily Weiss, winner of the 2018 American Chemical Society’s Early-Career Award for her pioneering work on nanocrystals and low-conductivity materials.

Another is Chad Mirkin, whose 1999 invention of dip-pen nanolithography – a new nanotechnology tool that allowed circuit boards to become smaller – was recognized in 2012 by National Geographic as one of the top 100 scientific discoveries that changed the world.

Chemistry was one of the 25 founding departments at Stanford University when it opened in 1891. The department awarded its first undergraduate degree to Charlotte Wray in 1894, and its first PhD in 1907 to William Draper Harkins, who would go on to predict the existence of the neutron in 1920.

There are now 24 faculty members in the department. Among them is Nobel laureate, W.E. Moerner, who was awarded the 2014 Nobel Prize in Chemistry for his role in the invention of microscopy techniques that could reveal molecular processes in real time.

Other notable Stanford chemists include Frank Abild-Pedersen, who in 2018 was one of the world’s most highly-cited researchers – his 2004 paper on atomic-scale imaging of carbon nanofibres has attracted more than 1,000 citations so far – and Carolyn Bertozzi, regarded as one of the top chemists of her generation.