Snapshot: The University of Tokyo – Asia’s star in the reputation ranks

The top-ranked university outside the US and UK for reputation. 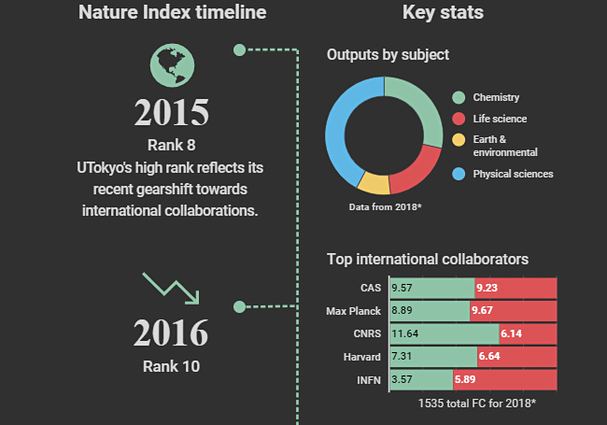 See the full infographic below.

Japan’s University of Tokyo is the highest ranked university outside the US and UK in Times Higher Education’s (THE) newly released 2019 World Reputation Rankings.

Despite the country's significant downturn in research output, UTokyo’s international reputation is on the rise, its rank jumping from 13th place in 2018 to 11th place in 2019.

Based on the world’s largest invitation-only opinion survey of senior, published academics, THE’s reputation rankings take into account 11,554 responses from 135 countries, and cover an even spread across disciplines.

The survey asks scholars to name no more than 15 universities that they believe are the best for research and teaching in their field, based on their own experience.

Also of note in the 2019 World Reputation Rankings:

• Australia doubled its representation this year, claiming six spots, up from three. Its researchers are also the most productive of the G20 nations, as shown in a recent Clarivate report.

• The University of Toronto is the first Canadian university to feature in the top 20 since 2015. It’s ranked 19th, up from joint 22nd last year.

Key facts and figures shown include the top international collaborations, UTokyo’s subject strengths, and its comparative performance in other global rankings.