Shenzhen and Guangzhou fight it out for top campuses

The upstart wants to copy its neighbour's academic success. 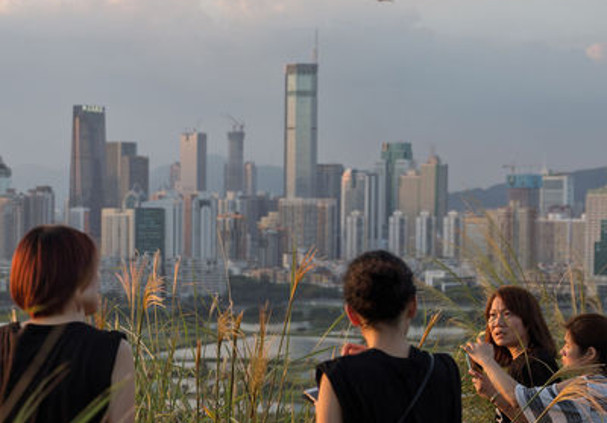 When it comes to basic research, Shenzhen has long been the little brother of neighbouring Guangzhou. The two cities are located 130 kilometres apart at the mouth of the Pearl River in China's richest province, Guangdong.

While Guangzhou's universities and public research institutes draw researchers and students from across the country, Shenzhen attracts technology and telecommunications titans such as Tencent and Huawei. But that dichotomy is beginning to change.

In 1980, the central government chose the small fishing town of Shenzhen to be the country's first special economic zone, which welcomed foreign and domestic investment without requiring the government's explicit approval. By 2016, Shenzhen's high-tech industries produced RMB784.7 billion (US$116.8 billion) in revenue, accounting for 40% of the city's GDP. Just over 4.3% of its GDP went to R&D, the highest percentage after Beijing, amounting to more than RMB84 billion (US$12.6 billion).

With 11 million residents, Shenzhen is now the richest major city in the country per capita. It is also China's most innovative metropolis. Huawei, for example, is the only Chinese company ranked in Clarivate Analytics Top 100 Global Innovators, and DJI Innovations Science and Technology has become the world's largest manufacturer of civilian drones. Both companies are based in Shenzhen.

“Shenzhen's market-driven economy and friendly environment has attracted innovative entrepreneurs, but, for a long time, it lacked local science and technology resources and talent,” says Du Debin. Until about a decade ago Shenzhen had only one multidisciplinary university involved in research — Shenzhen University (SZU). And as it stands, SZU has not been recognized by the Ministry of Education as a national key university, which would give it extra funding and the pick of the country's top students. But in the past ten years, Shenzhen's academic research landscape has begun to gain ground.

Guangzhou, the capital of Guangdong Province, has been at the centre of international trade since the 18th century. Guangzhou is home to most of the universities, professors and public research institutions in Guangdong.

In 2016, universities in Guangzhou took in more than one million undergraduate students — more than any other city in China, and 11 times more than Shenzhen. Sun Yat-sen University (SYSU) and South China University of Technology (SCUT) are among the top 50 institutions in China in the Nature Index. In 2016, Guangzhou had a weighted fractional count (WFC) of 228, more than double that of Shenzhen at 103.

“For decades, Guangzhou has been an important talent supplier to Shenzhen,” says Wan Lu, an economist at Guangdong Academy of Social Sciences.

It also offers a constant stream of ideas. Investors based in Shenzhen, home to ChiNext, the Chinese version of the NASDAQ stock market, often invest in inventions and technologies developed by Guangzhou-based institutes.

For example, Shenzhen Capital Group bankrolled the mobile app start-up Mob.com, whose founders came from SCUT. Launched in 2012, Mob.com's services have been used on more than a billion devices worldwide. The city-pair's strongest co-authorship link in the Nature Index in 2016 was between the optical components company Shenzhen Star Optoelectronic Technology and SYSU in Guangzhou.

“We often collaborate with Guangzhou colleagues, because their academic disciplines and research devices are much more comprehensive than those available in Shenzhen,” says Wu Xuli, a medical scientist at SZU College of Medicine. Guangzhou's medical institutes also offer a much larger database of patient information, he adds. 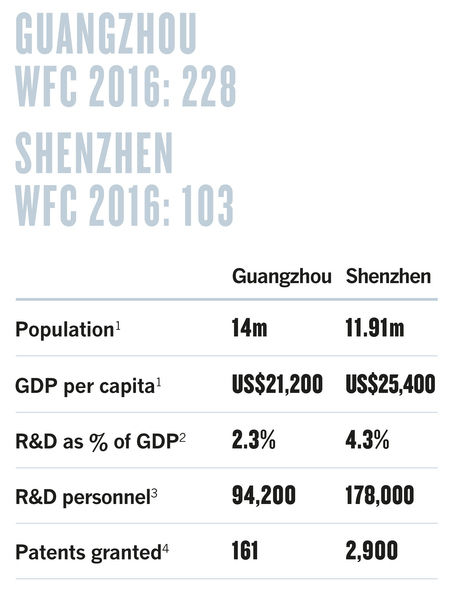 City-level contribution to the share of authorship in the Nature Index, measured by the share of weighted fractional count (WFC) for that year, compared to China’s share. 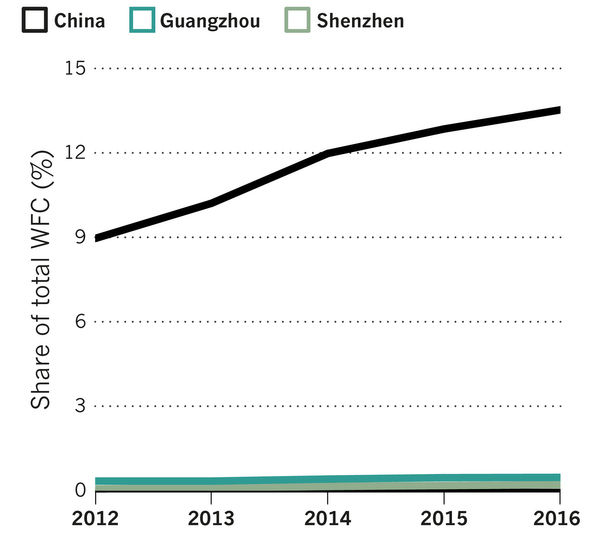 Guangzhou and Shenzhen contribute more to chemistry papers in the Nature Index than any other subject in the natural sciences. 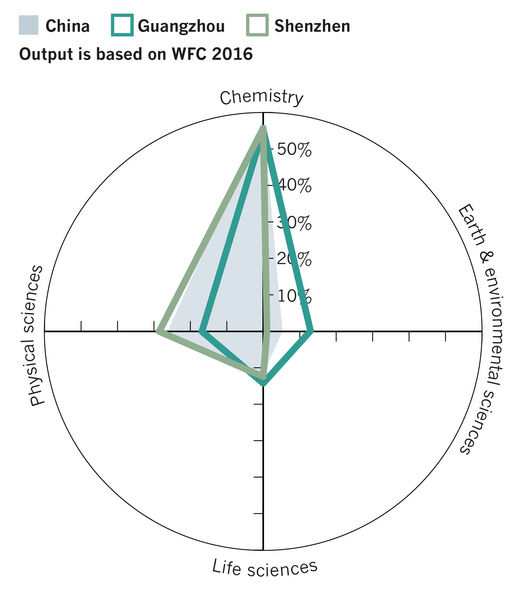 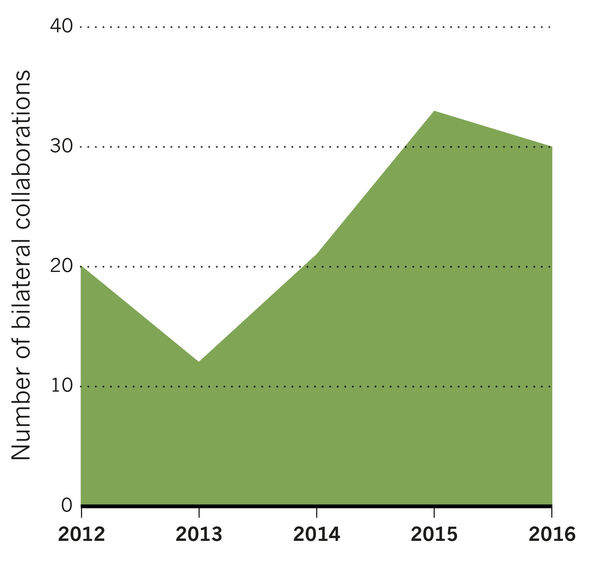 Shenzhen is beginning to come of age. In the last decade, researchers at its institutions have published dozens of papers in Nature, Science, Cell and Physics Review Letters, largely co-authored by researchers in the private sector. A major contributor to these papers has been the company BGI, a CAS spinoff and once the world's largest DNA sequencing provider for research.

“Although Shenzhen does not have many top universities, the pursuit of scientific innovation and market economy, together with the Shenzhen government's beneficial policies, attracted BGI to settle here in 2007,” says Liu Xin, vice director of BGI Research, referring to the generous tax exemptions and low-cost land offered to high-tech firms. BGI's achievements include publishing a complete sequence of the giant panda, seahorse and carrot genomes, and conducting large-scale population analyses of the genetic basis of disease.

Physicists in Shenzhen have also benefited from their close proximity to the neutrino observation lab at the Daya Bay nuclear power plant, co-authoring a paper in Physical Review Letters in 2012, which found that neutrinos could oscillate from one state of mass to another to an unexpectedly large degree.

The Shenzhen municipal government has begun to use its financial clout to expand its research infrastructure. Between 2015 and 2016, it signed agreements with 10 universities, including SYSU, SCUT, Tsinghua University, [Peking University]https://www.natureindex.com/institution-outputs/china/peking-university-pku/5139072d34d6b65e6a002146), and Harbin Institute of Technology, to either set up campuses in the city or upgrade their original teaching-focused graduate schools to independent campuses that foster research. The city offered the universities free land and financial subsidies for construction and salaries.

In 2009, Shenzhen established the research university Southern University of Science and Technology (SUSTech), which has promised to provide salaries equivalent to those in Western universities, with a minimum research start-up fund of US$1.5 million over three years.

A 2012 study of 28 countries found that public universities in China paid on average one-tenth of the salary of those in Canada, the highest-paying country. “The establishment of these new university campuses will provide new fuel for Shenzhen's innovation,” says Du. Within a short period of time, SUSTech has become Shenzhen's top-contributing institute to papers included in the Nature Index — its WFC has shot up from less than 1 in 2012 to 27 in 2016.

Not to be left behind, Guangzhou has also vowed to increase its R&D expenditure to 3% of GDP by 2020, as reported in its 13th five-year plan, released in 2016. Since 2015, it has worked with Shenzhen to build a Guangzhou–Shenzhen Science, Technology and Innovation Corridor, which aims to replicate Boston's Route 128. The corridor will integrate Guangzhou's academic research capacities with Shenzhen's technology development infrastructure, and manufacturing bases in industrial cities between the two municipalities.