Science in North Korea: How easing the nuclear stand-off might bolster research

The isolated nation publishes fewer than 100 scholarly articles a year — but as political tensions thaw, researchers hope for greater collaboration. 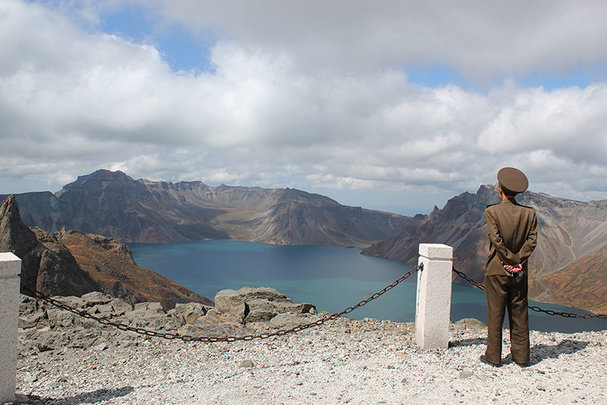 Volcanic Mount Paektu (also called Changbaishan) straddles the border between China and North Korea and has been studied by Western researchers.

Little published research emerges from North Korea, but after historic peace talks last week with South Korea, scientists have reason to hope that the country will open up to more collaborations.

In the 20 April speech in which he announced the halting of nuclear tests, North Korean leader Kim Jong-un said his country would start to focus on boosting its economy through science and education. That’s an exciting prospect, says James Hammond, a seismologist at Birkbeck, University of London, who returned from Pyongyang on 21 April after a meeting to develop research proposals with North Korean scientists.

Hammond works in a rare collaboration with scientists in the United States, China and North Korea, to study a hazardous volcano — which the Koreans call Mount Paektu — on the Chinese–Korean border. “There’s a general positive feeling in North Korea now,” Hammond says. “It’s clear that science and scientists are held in very high regard there. Our colleagues have been enthusiastic to pursue science and to conduct international collaboration, and this new atmosphere can only help with that.”

North Korea has already been expanding its presence in the international research literature: its scientists published more than 80 articles in mainstream journals last year, more than 4 times their output in 2014, according to the Web of Science database. (Records of North Korea’s output are not entirely reliable, but other scholarly indices, such as Dimensions, report similar changes; these numbers exclude papers from conference proceedings.) The country’s biggest collaborator is China — its scientists co-published 60% of their papers with Chinese co-authors over the past three years — followed by Germany and South Korea (see ‘North Korea's science’).

Besides the geosciences work, collaborations include a project with a Dutch team to introduce genes that make potatoes less susceptible to blight, and a partnership with chemists in the United Kingdom on theoretical aspects of perovskite solar cells. Aron Walsh, a materials scientist at Imperial College London who was part of that collaboration, has published two research papers with North Korea researchers, whom he corresponded with by e-mail. “We hope to finally meet face-to-face this summer,” Walsh says. South Korea has a large community of perovskite researchers, he notes. “I have heard cautious optimism surrounding the possibility of inter-Korean collaboration in this field.”

North Korean researchers are also beginning to publish articles by themselves, especially in mathematics, physics and materials science. Overall, the country’s main research areas are engineering, physics, chemistry, materials science and mathematics, which together have accounted for 80% of its total papers since 2015. Kim Il-sung University in Pyongyang puts out just under half of the country’s publications.

North Korea seems to neglect biology and biomedicine, says Grant Lewison, a bibliometrics specialist at King’s College London who has studied North Korea’s research output. “Doubtless, the country’s scientific effort was directed to what would be of use militarily,” he says. If there is more political openness on the Korean peninsula, then an increase in scientific output — particularly collaborations with South Korea — could be expected, he says.

Hammond hopes that research will be a vehicle for North–South political rapprochement. “Science is a subject around which you can build relationships,” he says. He and his colleagues are preparing a paper on their first analysis of the volcano that uses seismic data from both the Chinese and North Korean sides. “If we want to understand this volcano, it requires a cross-border approach,” he says.

Collaboration will still involve numerous diplomatic hurdles. Last year, the United States said that people with US passports could not travel to North Korea without special dispensation. And United Nations sanctions currently prevent scientific collaborations with North Korea unless a UN committee agrees that the research won’t contribute to nuclear or military-related activities. (The scientists have received their clearance from the UN, Hammond says.)

North Korea’s research on nuclear energy (which isn’t published in international journals) has largely been built through extensive collaboration with Russia, says Jenny Town, assistant director at the US-Korea Institute at the Johns Hopkins School of Advanced International Studies (SAIS) in Washington DC. And North Korea and the United States previously engaged in scientific exchanges on topics including energy and climate change, Town notes. “There is certainly plenty of interest in getting back in the game, but there has been little opportunity since sanctions have become stricter and stricter.”

Kim also pledged last week to close North Korea’s Punggye-ri nuclear complex — where it conducted nuclear-bomb tests — and said it was willing to allow international inspectors into the site to verify the shutdown. “Closing the site and allowing inspections is an important diplomatic concession, but one that can still be portrayed to domestic audiences in a more moderate way,” says Town, who is also managing editor of the website 38 North, a project of the US–Korea institute at SAIS that some US nuclear experts contribute analysis and reporting to. “I know our scientists and geologists are very excited at the prospects of getting boots on the ground,” she says.