A hive of innovation, Wuhan has stormed up the Nature Index, but competition for talent is heating up. 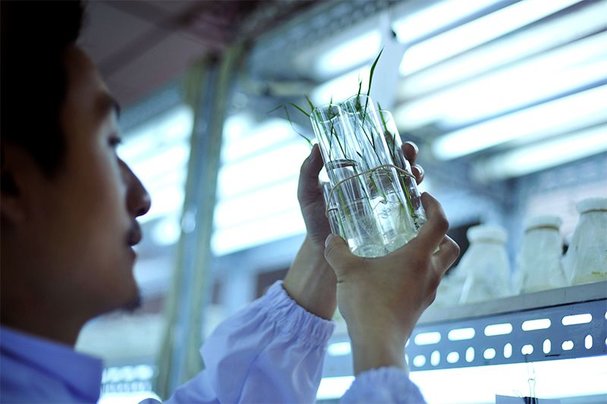 Researchers in Wuhan benefit from an equipment-sharing system, giving them access to a wide range of cutting-edge facilities.

Less than a year after becoming president of Wuhan University (WU), Dou Xiankang embarked on a global recruitment drive. In October 2017, he visited New York, Boston and San Francisco, the capitals of scientific excellence in the United States. By May 2018, Dou, a space physicist, had been in Paris, Munich, Berlin and London, attending job fairs to persuade ambitious young scientists of the research promise in his city.

Wuhan is at a crossroads. If all goes well, it has long-term prospects as a leading science city in China. There is a risk, though, of a slip into obscurity as the hunt for talent heats up in the country.

In the past six years, Wuhan, a bustling city in central China, has risen in the Nature Index faster than any other city in the top 20. Its contribution to the authorship of papers in 82 high-quality research journals tracked by the index — a metric known as fractional count (FC) — has grown from 214.51 in 2012 to 490.54 in 2017, placing it nineteenth globally and fourth in China. WU is the city’s top contributor to the index, with an FC in 2017 of 159.81.

The city’s success has largely been driven by the recruitment of ambitious young scientists, says Zhao Rongying, a bibliometrician and senior science policy researcher at WU. Wuhan is the third most popular destination for recipients of the junior version of the central government’s Thousand Talents Plan, a scheme to bring back high-achieving academics and science entrepreneurs living abroad. The city offers scientists solid research infrastructure, low living costs, prestigious positions and money to spend on their scientific interests.

But as competition for bright minds intensifies across the country, a recent ban on poaching researchers from universities in disadvantaged regions could put Wuhan under pressure. Wuhan does not have the financial might to compete with rich coastal cities such as Beijing, Shanghai, and Shenzhen. University representatives and city officials are redoubling efforts to keep the city in the limelight.

The capital of Hubei province, and a national hub for education and economic activity, the city’s position strengthened following the establishment of the People’s Republic of China in 1949. The central government set up new universities in Wuhan, expanded existing ones, and relocated coastal research institutions to avoid the threat of military attacks by the US and then-Soviet Union during the 1950s and the 1960s.

By 2017, Wuhan hosted 84 universities — the highest number of any city in the country. Five universities had received substantial financial support under the Ministry of Education (MOE)’s Project 211, launched in 1995 to raise the standard of research at universities. Another two were selected under Project 985 launched in 1998 to establish world-class universities, including WU and Huazhong University of Science and Technology (HUST).

In 2016, research and industrial institutions in Wuhan spent 37 billion yuan (US$5.4 billion) on R&D in areas ranging from optoelectronics to materials science. This investment accounted for 3.1% of the city’s GDP, ranking Wuhan as the country’s fifth highest city in R&D activity, after Beijing, Shenzhen, Shanghai and Xiamen. Wuhan’s R&D investment increased to 3.2% of GDP in 2017.

That same year, the government introduced an even larger scheme to raise the global standing of its universities and research disciplines, the Double First-Class project. The initiative supports 29 disciplinary programmes at universities in Wuhan, including geophysics, biology, and surveying science at WU, optical engineering, computer science and engineering thermal physics at HUST, horticultural science and zootechnics at Huazhong Agricultural University (HZAU), and geology at China University of Geosciences.

Unable to match wealthy coastal universities in attracting established scholars, Wuhan has appealed to younger talents, says Fan Jingqun, deputy director of academic development and planning at HZAU. Between 2011 and 2017, Wuhan welcomed 262 young researchers through the Thousand Talents Plan, the third highest after Beijing and Shanghai.

Chen Shi was among the first batch of scientists to return to China under the scheme. Having spent several years as a postdoctoral researcher at Massachusetts Institute of Technology and Harvard University in Boston, Chen headed home in 2011 for a lucrative professorship in pharmaceutical sciences at WU.

Since his return, Chen and his team have published widely in the journals tracked by the index, revealing an unusual modification to the DNA backbone of some bacteria, in which oxygen is replaced with sulfur. The modification has diverse functions, including to regulate cellular metabolism, and could offer a new path to genome editing.

Young Thousand Talents scholars are widely considered to be more academically productive in China than full professors repatriated under the original version of the programme, many of whom do not work in China full-time.

A mechanism for instrument sharing among local institutions also gives researchers broad access to facilities. Chen says he often uses the advanced microscopy devices at HZAU and Wuhan Institute of Virology under the Chinese Academy of Sciences (CAS) to perform his genomic studies at low cost. Local university faculty members with promising ideas are welcome to use the CAS facilities, says Li Wei, deputy director of the CAS Wuhan Branch, which governs and coordinates seven research institutes.

His branch also hosts the biannual Xiaohongshan Interdisciplinary Forum to promote collaborations between CAS scientists and those at universities in Wuhan.

Despite Wuhan’s significant progress, the city could struggle to maintain its momentum. “The competition for talents has become more severe in recent years,” says Fan at HZAU. “Coastal universities are offering better research platforms and salaries.”

In 2013 the MOE published a directive banning coastal universities from poaching top talents from financially strapped western and north-eastern universities. In 2017, the ministry reiterated the policy, aimed at ensuring fairness in education, and committed to punishing violators. This could make universities in central China, which are not protected by the no-poaching rule, a primary target for talent hunters.

Wuhan-based universities have moved to pre-empt any losses. According to Zhou Xiong, deputy director for personnel and academic recruitment at HZAU, universities have increased the annual salaries offered to young Thousand Talents scholars and other decorated scientists in recent years to half a million yuan — equivalent to the average salary at coastal universities. This may not be enough, however, as many coastal universities are further increasing their pay.

WU recently set up a fund worth 400 million yuan specifically for hiring and providing seed money to new recruits. And in 2017, the city government announced a special fund to support university growth. It also announced tax breaks and an assurance of places in top local schools for the children of returnees.

Chen does not see Wuhan’s attraction fading any time soon. “In fact, there are more and more researchers moving from Beijing and Shanghai to Wuhan too,” he says.