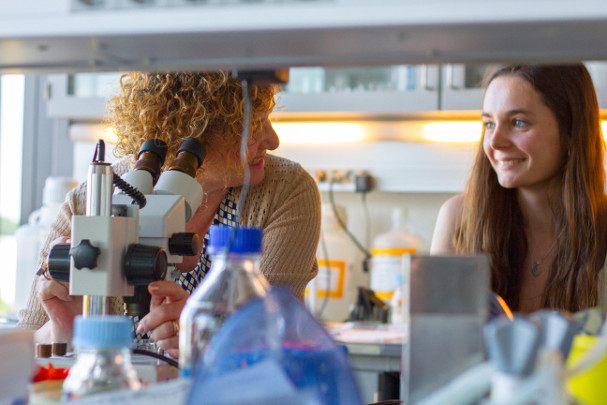 Shohreh Isszade and her colleague at University of Cophenhagen.

Many of the countries that increased their output of high quality science in the past few years will come as no surprise. China leads the list - its trajectory is well established - followed by India and the United Kingdom. Between 2012 and 2015, these countries had the highest absolute increase in their weighted fractional count, the index metric used to assess a country's contribution to 68 high impact natural science journals.

Of the ten countries with the highest increase in their WFC, we consider the 'rising stars' to be those who also experienced a large percentage increase in their contribution to the index over the past four years, such as Saudi Arabia, Poland and Russia. Other countries, such as Denmark, Chile, Thailand and South Africa improved in specific subject areas.

A centre for biomedical research, the country’s contribution to life science articles increased over four years to a WFC of 114.48 in 2015.

Starting from a low base, Turkey’s contribution to Earth and environment studies increased to 6.80 in four years. Will this trajectory continue?

The former Soviet state increased its output in the life sciences by more than 60% over four years, the highest percentage increase of the top 10 countries in this field.

The clear skies of the Atacama Desert are the perfect location for some of the world’s biggest telescopes. This edge in astronomy helped boost the country’s contribution to physical sciences to a WFC of 68.05 in 2015.

The country’s overall output in the index grew by more than 40% in four years, driven by a significant rise in its physical sciences WFC, which jumped from 23.70 in 2012 to 39.31 in 2015. This result reflects South Africa’s strength in astronomy.

The Middle Eastern kingdom wants to reduce its reliance on oil by boosting science. Its chemistry WFC almost tripled to 66.66 from 2012 to 2015, and its contribution to Earth and environment research climbed from 2.77 to 7.02.

The contribution of Indian researchers to chemistry publications grew from a WFC of 350.39 to 472.48 in four years. The subject made up more than half the country’s output in the index in 2015.

Starting from a small base, Thai researchers almost doubled their output in physical sciences in four years, resulting in a WFC of 17.06 in 2015. The country is trying to boost the number of researchers and industry funding for science.

With strong government commitment to science, Singapore experienced a significant rise in chemistry and life science output over four years. Its WFC for Earth and environment research was 7.06 in 2015, a doubling of its 2012 performance.