These institutions have achieved high increases in research output in the Nature Index since 2015. 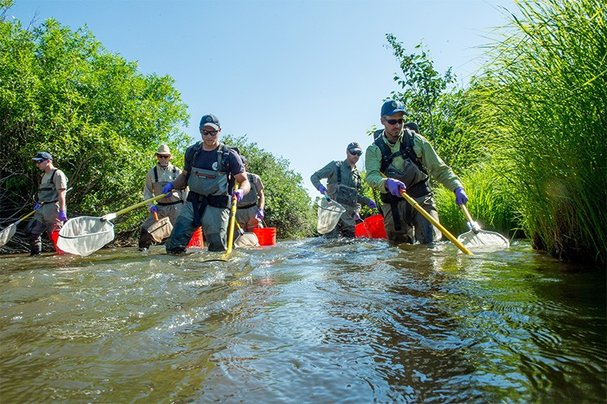 The Chinese Academy of Sciences in Beijing, China is the fastest-rising institution in Earth and environmental sciences research in the Nature Index 2020 Annual Tables.

Its change in adjusted Share from 2015 to 2019 was 102.21, representing a 52.85% increase over 4 years. (When comparing data over time, Share values are adjusted to 2019 levels to account for the small annual variation in the total number of articles in the Nature Index journals. The Nature Index is one indicator of institutional research performance. See Editor’s note below.)

Here is a selection of institutions in the top 25 of the Nature Index 2020 Annual Tables — rising stars in Earth and environmental sciences research.

Founded in 1952 in Beijing (known then as Peking) as a conglomeration of geology departments from Peking University, Tsinghua University, Tianjin University and other leading Chinese universities, the China University of Geosciences (CUG) has long been a national leader of research in Earth and environmental sciences.

In 1975, CUG moved to the central Chinese city of Wuhan, but three years later, its graduate school was relocated back to Beijing (still Peking at the time). In 2005, the two campuses were split into separate comprehensive universities, with the Wuhan campus inheriting the CUG title and the Beijing campus becoming known as CUG Beijing (CUGB).

In 2019, CUG enrolled 18,092 undergraduate, 7,774 master’s, and 1,764 doctoral students. Among its 3,225 faculty members are 11 members of the Chinese Academy of Sciences, 19 full-time Changjiang scholars honoured by the Ministry of Education, and 16 recipients of the Distinguished Young Scientist award from the National Natural Science Foundation of China.

CUG’s Earth science, environmental studies, and ecology researchers have achieved remarkable progress in producing high-citation papers. CUG has become the third-fastest rising institution in the discipline in the Nature Index, and CUGB is placed 10th.

Based in Beijing, the China Meteorological Administration (CMA) is a public service and research organization affiliated with China’s State Council. In addition to weather forecasts, the CMA produces research on climate systems and runs the Chinese Academy of Meteorological Sciences, National Climate Center, and eight regional weather research institutions located in major cities including Beijing, Shanghai and Guangzhou.

With climate change and air pollution at the forefront of the global research agenda, CMA scientists have been widely published on matters of climate surveillance and modelling, atmospheric pollutant formation, and the ecological impacts of climate change.

Located amid the Rocky Mountains and surrounded by national parks, Colorado State University (CSU) in Fort Collins is ideally situated as a top performer in Earth and environmental sciences research. In the Nature Index, the discipline accounts for more than one-third of CSU’s total research output.

In 2019, CSU spent US$398.5 million on research, with federal funding agencies contributing around 70%. It has secured funding of $128 million over 5 years from the US National Oceanic and Atmospheric Administration to support projects such as the development of improved forecasting models and real-time satellite tools for the National Weather Service.

A 2019 Nature Climate Change article co-authored by NSU researchers revealed that wind speeds have increased by 7% since 2010 in northern mid-latitude regions, which could inform research into more efficient wind energy systems.

Founded in 1811 as the first university in Norway, the University of Oslo (UiO) has eight faculties and three museums on campus, including its Viking Ship Museum, which contains richly decorated ninth-century warships, skeletons and burial gifts.

Its Faculty of Mathematics and Natural Sciences hosts roughly 6,000 students, 800 doctoral candidates and 1,100 academic staff, and covers areas such as theoretical astrophysics, technology systems and geosciences. The Centre for Earth Evolution and Dynamics, which explores fundamental issues for understanding Earth’s tectonics, climate and volcanoes, is among its nine National Centres of Excellence.

In early 2020, UiO researchers developed the first map of permafrost distribution in the Northern and Southern Hemispheres using satellite data and a new model. The map reveals that the coldest permafrost on Earth is found on Mount Markham in the Queen Elizabeth Range of the Transantarctic Mountains in Antarctica, at a temperature of −36 °C.

Founded in 1909 in China’s northwestern province of Gansu, Lanzhou University (LZU) enjoyed rapid development in the 1950s and 1960s, as part of a comprehensive government programme to invest in the country’s remote regions.

By the end of 2019, LZU had 19,964 undergraduate, 11,408 master’s, and 2,885 doctoral students. Its 2,228-member faculty includes six members of the Chinese Academy of Sciences and Chinese Academy of Engineering, 18 full-time Changjiang scholars honoured by China’s Ministry of Education, and 46 recipients of the Distinguished Young Scientist award from the National Natural Science Foundation of China.

LZU’s strongest subject output in the Nature Index is chemistry. It has strengths in atmospheric and grasslands research, ecology and geography.

For a description of the terminology and methodology used in this supplement, please see our guidelines here.

***Editor’s note: *The Nature Index is one indicator of institutional research performance. The metrics of Count and Share used to order Nature Index listings are based on an institution’s or country’s publication output in 82 natural-science journals, selected on reputation by an independent panel of leading scientists in their fields. Nature Index recognizes that many other factors must be taken into account when considering research quality and institutional performance; Nature Index metrics alone should not be used to assess institutions or individuals. Nature Index data and methods are transparent and available under a creative commons licence at natureindex.com.